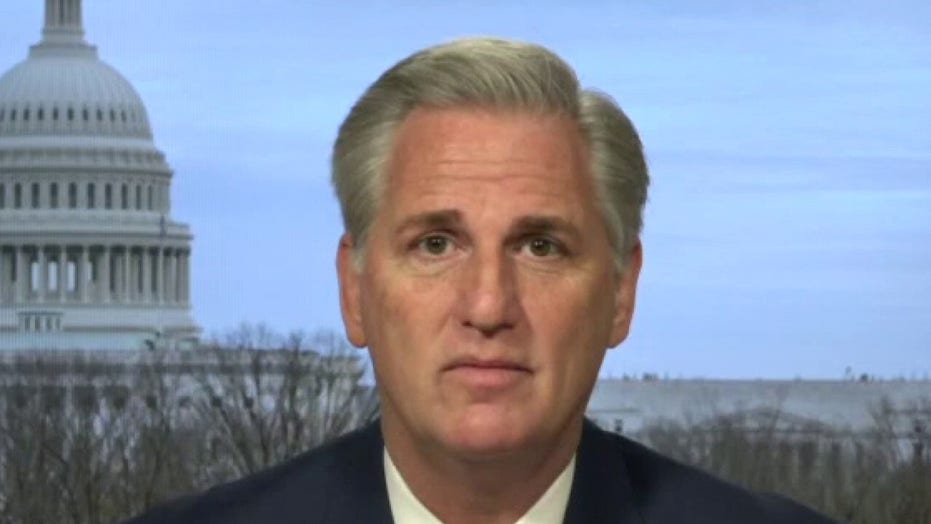 GOP House Leader Kevin McCarthy said Friday that an FBI briefing on Rep. Eric Swalwell's contact with an alleged Chinese spy made clear one thing: The California Democrat should not have access to the nation's secrets.

McCarthy said the House Intelligence Committee is a special panel that's entrusted with classified information and he renewed his demand that Swalwell be removed from the committee.

"He should not be on Intel," McCarthy, R-Calif., told reporters after he exited the closed-door FBI briefing at the Capitol.

MCCARTHY TO BE BRIEFED BY FBI ON SWALWELL TIES TO CHINA SPY: 'I WILL NOT GIVE UP'

"I just think there are definitely 200 other Democrats that I know could fill that place," McCarthy added.

House Speaker Nancy Pelosi, D-Calif., was also briefed Friday by the FBI about Swalwell’s relationship six years ago with a suspected Chinese spy known as Fang Fang or Christine Fang.

Pelosi left the meeting without making any comments to reporters. Pelosi has previously stood by Swalwell and her decision to appoint him to the Intelligence Committee in January of 2015.  "I don't have any concern about Mr. Swalwell," Pelosi said last week.

Swalwell's judgment has been in the spotlight after Axios reported that Fang targeted up-and-coming local politicians, including those who had the potential to become national figures.

Swalwell has not commented publicly about the extent of his relationship with Fang, who reportedly had sexual interactions with at least two Midwestern mayors.

Fox News’ Jake Gibson caught up with Swalwell outside his home Thursday and he ignored all questions, including one about Fang. This comes after his office declined to comment on the nature of their relationship beyond what they had told Axios and then ignored subsequent requests for information.

"Rep. Swalwell, long ago, provided information about this person — whom he met more than eight years ago, and whom he hasn’t seen in nearly six years — to the FBI," Swalwell's office told Axios, which broke the story about Fang. They added that Swalwell "will not participate" in the story out of concerns about possible classified information.

Fang reportedly took part in fundraising for Swalwell's 2014 reelection campaign -- although she did not make donations nor was there evidence of illegal contributions. Fang’s earliest known engagement with Swalwell occurred through the Chinese Student Association, Axios reported, and by 2014, she had developed "close ties" to Swalwell’s office.

Investigators became so alarmed by Fang’s behavior and activities that they alerted Swalwell in 2015 to their concerns, and gave him a "defensive briefing." Swalwell then cut off all ties with Fang and has not been accused of any wrongdoing, according to an official who spoke to the outlet.

Officials do not believe Fang received or passed on classified information.

Republicans have pounced on the Swalwell revelations and have demanded he be stripped of his Intelligence Committee assignment for the sake of national security. McCarthy has questioned Pelosi’s judgment for not removing him.

Pelosi said GOP and Democratic leadership were briefed "at the same moment" in the spring of 2015 about a suspected Chinese spy targeting members of Congress and the issue was addressed at the time.

"In terms of Mr. Swalwell -- in the spring of 2015, the leadership of the House and the [Intelligence] Committee were informed that overtures from a Chinese person were being made to members of Congress," Pelosi said last week. "When that was made known to the members of Congress, it was over."