Arizona border town mayor: We are getting no help, information on migrant crossings from the federal government

EXCLUSIVE: More than 20 House Republicans on Thursday wrote to President Biden urging his administration to stop blocking media access to border facilities amid what they described as an "out of control" crisis at the border.

"This crisis is out of control. Indeed it is far worse than most realize, largely because your administration is not only mischaracterizing the crisis but also prohibiting journalists from witnessing and documenting the crisis up close," the letter from 21 Republicans and led by Rep. Chip Roy, R-Texas, says.

"This is an insult to the purposes of a free press -- as defended in our Constitution -- which are to inform the public and hold those in power accountable," it says.

The Biden administration has come under fire from not only Republicans but also journalists for the lack of media access to Customs and Border Protection (CBP) facilities where migrants -- particularly child migrants -- are being held, even as pictures emerge showing cramped conditions.

EVEN LIBERAL MEDIA FED UP WITH BIDEN ADMINISTRATION OVER LACK OF ACCESS TO BORDER CRISIS, ABSENCE OF PRESSERS

The administration has denied there is a crisis at the border, calling it instead a "challenge" and blaming the Trump administration for the surge in numbers as it seeks to reverse its policies.

White House press secretary Jen Psaki was quizzed about the lack of access last week and cited issues like the COVID-19 pandemic as to why reporters haven’t been given access.

"Again we remain committed to sharing with all of you data on the number of kids crossing the border, the steps we're taking, the work we're doing to open up facilities, our own bar we're setting for ourselves, improving the and expediting the timeline and the treatment of these children," Psaki said. "And we remain committed to transparency. I don't have an update for you on the timeline for access, but it's certainly something we support."

The lawmakers were not impressed by the claims and made it clear they see it as crisis-level at the border.

"The southern border is clearly in crisis, and your administration appears not only to disseminated myths to the American people about the dire situation, but is also actively engaging in behavior that is preventing transparency and accountability to the American people you were elected to serve," the letter says. 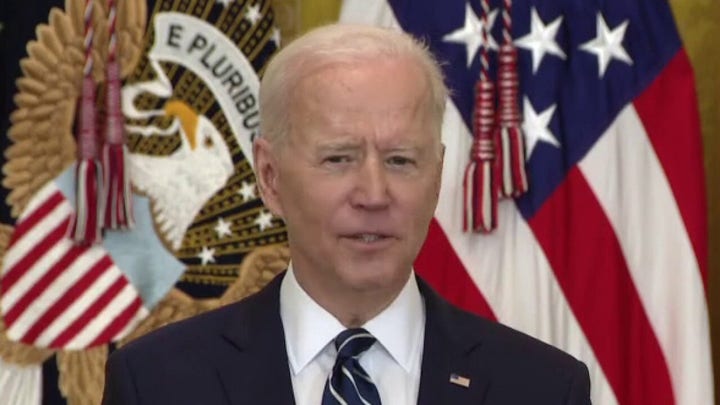 The lawmakers note that there are more than 5,000 unaccompanied children in border facilities, many being held after the 72-hour limit, and many more in Health and Human Services (HHS) care.

"There are more than 16,000 UACs in government custody and your administration is not only being dishonest about the situation but actively misleading the American people and blocking access to transparency," they say.

The letter calls for the administration to stop blocking access and to be "straightforward" with the American people about the situation at the border,

President Biden was asked about the crisis during a press conference Thursday afternoon and said he stood by the reversal of Trump-era policies -- moves that critics have said have fueled the surge at the border.

He also committed to "transparency" once he said a plan was in place as soon as the administration is "in a position to be able to implement what we are doing right now."