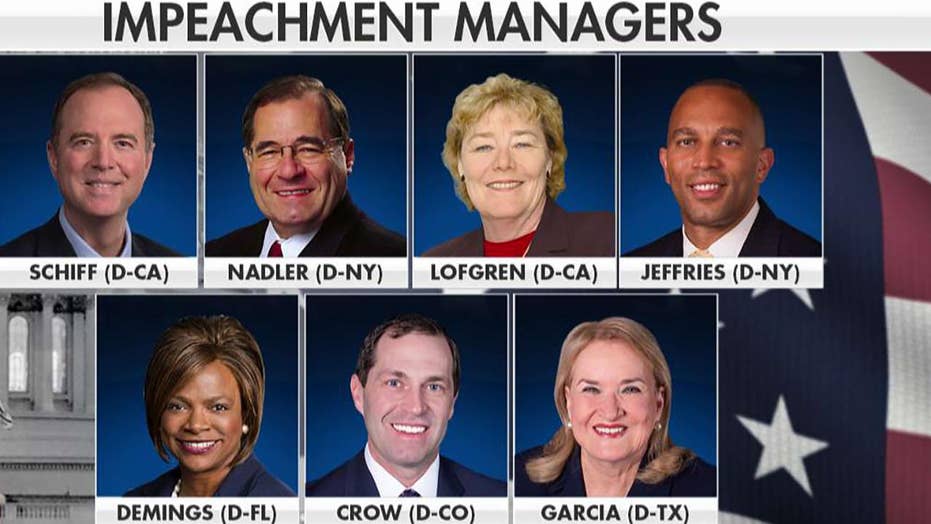 House Democrats prosecuting the Trump impeachment case took aim Tuesday at White House Counsel Pat Cipollone, claiming in a stunning letter that the lead member of the president's defense team is actually a “material witness” to the charges in both articles and demanding that he disclose all “first-hand facts and information” before proceedings begin.

The impeachment "managers" said they need that information in order to weigh potential “ethical” issues or conflicts of interest concerning his defense of the president.

Just hours before Senate trial proceedings were set to resume, the impeachment managers claimed that during the House inquiry they gathered “evidence” that indicates he is a “fact witness to numerous critical events related to the president’s scheme, and remains deeply involved in actions implementing the president’s directive to obstruct the House’s impeachment inquiry.”

SENATE TO DEBATE IMPEACHMENT TRIAL RULES: WHAT TO EXPECT

“In preparation for the trial of Donald J. Trump before the Senate, we write to notify you that evidence received by the House of Representatives during its impeachment inquiry indicates that you are a material witness to charges in both Articles of Impeachment for which President Trump now faces trial,” the managers – Reps. Adam Schiff, Jerrold Nadler, Val Demings, Hakeem Jeffries, Sylvia Garcia, Zoe Lofgren and Jason Crow – wrote in a letter to Cipollone on Tuesday.

“You must disclose all facts and information as to which you have first-hand knowledge that will be at issue in connection with evidence you present or arguments you make in your role as the President’s legal advocate so that the Senate and Chief Justice can be apprised of any potential ethical issues, conflicts or biases,” they wrote.

The managers then outlined Cipollone's alleged connection to both articles of impeachment — abuse of power and obstruction of Congress.

“Evidence indicates that, at a minimum, you have detailed knowledge of the facts regarding the first Article and played an instrumental role in the conduct charged in the second Article,” they wrote.

They went on to say that ethical rules generally "preclude" a lawyer from acting as an advocate in a trial if he or she is also a witness.

“These issues are directly implicated by your involvement in the events underlying the Articles of Impeachment,” they wrote.

With regard to the abuse of power article, the managers referenced testimony from “multiple witnesses” in the House inquiry about the request for Ukrainian officials to investigate Democrats and the hold on military aid to Ukraine amid those requests -- noting they reported their concerns to Deputy Counsel to the President for National Security Affairs John Eisenberg. The managers pointed out in their letter Tuesday that Eisenberg “reports directly” to Cipollone.

The managers also went on to claim that the White House counsel’s office was “directly involved in potential efforts to conceal President Trump’s scheme from Congress and the public.”

“Furthermore, there is evidence that you were directly involved in briefing President Trump about the whistleblower complaint submitted to the Inspector General for the Intelligence Community and in the decision to withhold that complaint from Congress in violation of the law,” they wrote.

“In light of your extensive knowledge of these key events, your personal representation of President Trump threatens to undermine the integrity of the pending trial,” they wrote.

The White House blasted the request from the House managers, calling it "completely absurd," and said, instead, Schiff should consider leaving the prosecution team.

“The Democrats are an utter joke - they have no case, and this latest political stunt proves it.  The idea that the Counsel to the President has to turn over protected documents and confidential information is ludicrous, and to imply he can’t represent the President of the United States in an impeachment proceeding is completely absurd," White House Deputy Press Secretary Hogan Gidley said in a statement Tuesday.

“Further, the man Democrats appointed to lead these proceedings is Adam Schiff - who has been caught lying multiple times about Russia collusion evidence that didn’t exist, made up a totally phony phone conversation about Ukraine that never happened, and lied that his staff didn’t have contact with the whistleblower," he continued. "If there’s anyone who should be disqualified from leading this proceeding it’s Mr. Schiff.”

"Democrats’ opening salvo in impeachment: they demand Trump get rid of his lawyer, Pat Cipollone. Absurd request," Cruz said in a statement to Fox News. "Unlike the House, the Senate will have a FAIR trial. That means we won’t deny the President his lawyer ON THE DAY the trial starts."

He continued: "Under the standard put forth by the House Democrats today – that any potential fact witness cannot serve as counsel in the impeachment hearing – there is an obvious person who should be disqualified: Adam Schiff. Schiff, it has been alleged, spoke directly with the so-called ‘whistle-blower’ and may even have helped him draft the complaint that launched this entire impeachment. ... So, maybe we should disqualify Schiff as a lawyer, and schedule him instead as a witness to explain his role in creating the ‘evidence’ in this proceeding?”

Schiff, the chairman of the House Intelligence Committee, led most of the House impeachment inquiry out of his panel. House Republicans claimed that members of Schiff's staff spoke with the whistleblower before the controversy boiled over. Schiff maintains that he has not personally spoken with the anonymous whistleblower. However, it was revealed late last year that the whistleblower had early contact with his office, essentially giving them a heads-up about the complaint concerning Trump's July 25 phone call with Ukraine's president that touched off the controversy.

"Throughout this process, these Members of Congress have provided guidance to the White House team, which was prohibited from participating in the proceedings concocted by the Democrats in the House of Representatives," White House press secretary Stephanie Grisham said in a statement Monday. "The President looks forward to their continued participation and is confident that the Members will help expeditiously end this brazen political vendetta on behalf of the American people."