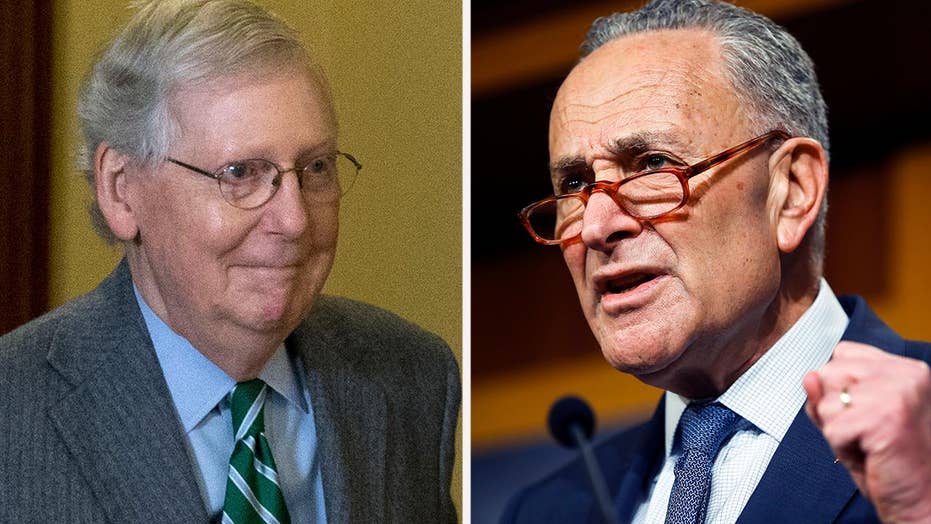 The blistering statement from the impeachment managers came after McConnell, late Monday, revealed his resolution.

The resolution showed a condensed, two-day calendar for each side to give opening statements, at 12 hours per day. After the four days of opening arguments, senators would be allowed up to 16 hours for written questions to the prosecution and defense, followed by four hours of debate. Only then would there be votes on calling other witnesses—something that, if approved, would likely happen next week. At the end of the deliberations, the Senate would then vote on each impeachment article.

“For weeks, Mitch McConnell has asserted that he planned to follow the ‘Clinton precedent’ for structuring President Trump’s Senate impeachment trial. It is now clear why he hid his proposed resolution all this time and released it the night before the trial is set to begin,” the managers wrote in a statement Tuesday morning. “His resolution deviates sharply from the Clinton precedent—and common sense—in an effort to prevent the full truth of the President’s misconduct from coming to light.”

The managers argued that during the 1999 impeachment, Clinton provided “more than 90,000 pages” of documents before the trial took place, “all of the witnesses had testified before the Senate trial began,” and the only issue was “whether they would be re-called to testify once more.”

“Here, McConnell is trying to prevent the witness from ever testifying, and the public from ever finding out what they have to say,” they wrote. “If those efforts are successful, this will be the first impeachment trial in American history in which the Senate did not allow the House to present its case with witnesses and documents. The McConnell Resolution goes so far as to suggest it may not even allow the evidence gathered by the House to be admitted.”

They added: “That is not a fair trial. In fact, it is no trial at all.”

McConnell is slated to formally introduce his proposal to lay out the rules to govern the trial on Tuesday—rules that he has repeatedly said would mirror those the Senate used in the impeachment of then-President Bill Clinton in 1999.

House Speaker Nancy Pelosi, D-Calif., had for weeks been holding onto the articles of impeachment—charges of abuse of power and obstruction of Congress—in a bid to extract favorable terms for the trial, including a commitment from McConnell on witnesses and additional document requests. But once McConnell made clear he was unwilling to negotiate, she ended the delay, and transmitted the articles.

Pelosi on Tuesday slammed McConnell’s plan, saying “the Clinton comparison was a lie.”

“Leader McConnell’s plan for a dark of night impeachment trial confirms what the American people have seen since Day One: the Senate GOP Leader has chosen a cover-up for the President, rather than to honor his oath to the Constitution,” she said in a statement. “Leader McConnell’s process is deliberately designed to hide the truth from the Senate and from the American people, because he knows that the President’s wrongdoing is indefensible and demands removal.”

She added: “No jury would be asked to operate on McConnell’s absurdly compressed schedule, and it is obvious that no Senator who votes for it is intending to truly weigh the damning evidence of the President’s attacks on our Constitution.”

But Sen. Mitt Romney, R-Utah, who was part of a small group of GOP senators who said they wanted to consider witness testimony and documents that weren’t part of the House impeachment investigation, said that McConnell’s resolution, overall, “aligns closely with the rules package approved 100-0 during the Clinton trial.”

“If attempts are made to vote on witnesses prior to opening arguments, I would oppose those efforts,” Romney said.

The Senate trial is slated to begin at 1 p.m. ET Tuesday. House managers and the president’s defense will debate McConnell’s proposal, followed by hours of closed session debate from senators on the same proposal. Senate Minority Leader Chuck Schumer, D-N.Y., will have the chance to introduce a counter-proposal, which senators will debate on. Later in the evening, the Senate will have its final roll call vote on McConnell’s proposal, which will dictate the terms for the trial going forward.

Schumer, late Sunday, vowed that he would "force a vote on witnesses and documents" in the trial.

“We Democrats aim to get the truth,” Schumer said. “Make no mistake about it, we will force votes on witnesses and documents, and it will be up to four Republicans to side with the Constitution, to side with our democracy, to side with the rule of law, and not side, in blind obeisance, to President Trump and his desire to suppress the truth. Because, in my judgment, he probably thinks he’s guilty.”

As for possible witnesses, Democrats have called for testimony from former National Security Adviser John Bolton for weeks. Bolton, earlier this month, signaled that he would be open to testifying, and would comply with the request, should he receive a congressional subpoena.

Republicans, though, have warned of “witness reciprocity,” which would mean that GOP senators could request testimony from their own witnesses in exchange for Democrat-sought witness testimony.

Republicans have not committed to doing so, but many have floated calling former Vice President Joe Biden’s son, Hunter, as a witness.