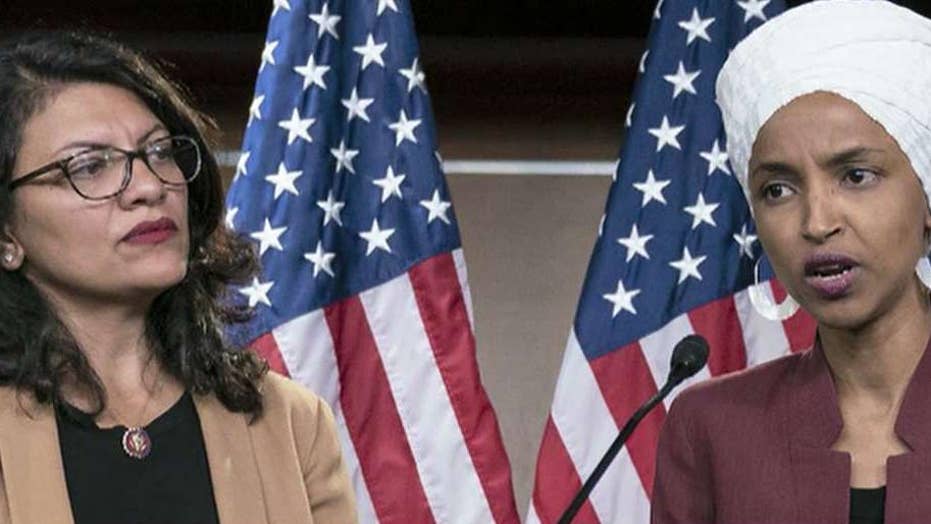 Was Israel within its rights to ban Rep. Omar and Rep. Tlaib from entering their country?

Senior Democratic members of Congress are considering legislative action against Ron Dermer, Israel’s ambassador to Washington, and David Friedman, the U.S. ambassador to Israel, according to McClatchy.

According to the report, the Democrats are discussing a possible vote on a statement of no confidence in Dermer, as well as the opening up of an inspector general investigation into Friedman.

Meanwhile, Tlaib’s 90-year-old grandmother, Muftia Tlaib, who lives in the West Bank, used fiery language as she ripped President Trump for his comments about the banned trip: “Trump tells me I should be happy Rashida is not coming,” she said, according to Reuters. “May God ruin him.”

Earlier in the week, Israeli Prime Minister Benjamin Netanyahu cited Omar and Tlaib’s anti-Israel statements in saying it would block her and another Democratic congresswoman from entering Israel as part of a planned trip.

The move – announced shortly after Trump tweeted that it would "show great weakness" to allow them in – has ignited a massive outcry from Washington Democrats, as Netanyahu's government stands by the decision arguing the U.S. lawmakers have an ulterior, anti-Israel agenda.

Both Omar and Tlaib are Muslim. They are also outspoken critics of Israel and have expressed support for boycotts of the country.

Still, while blocking the planned trip, the Israeli government said it would accept a humanitarian request from Tlaib to visit her Palestinian grandmother. But on Friday, Tlaib said she would not travel to the West Bank to visit family, despite getting permission hours before from Israel’s interior minister.

Trump blasted Tlaib’s decision not to visit on humanitarian grounds.

“Rep. Tlaib wrote a letter to Israeli officials desperately wanting to visit her grandmother,” Trump tweeted Friday. “Permission was quickly granted, whereupon Tlaib obnoxiously turned the approval down, a complete setup. The only real winner here is Tlaib’s grandmother. She doesn’t have to see her now!”

Fox News’ Ronn Blitzer and Brie Stimson and The Associated Press contributed to this report.