Tlaib signals she won't visit Israel after all despite getting permission

Democrat Rep. Rashida Tlaib tweets that visiting her grandmother under 'oppressive conditions' would stand against everything she believes in; Rich Edson has the latest from the State Department.

Israel’s interior minister tore into U.S. Rep. Rashida Tlaib on Friday for abruptly canceling plans to visit family in the West Bank after the government granted permission for the trip in a bid to smooth over a diplomatic firestorm.

“Apparently her hate for Israel overcomes her love for her grandmother,” Aryeh Deri tweeted.

The dueling statements from Tlaib and the Israeli government are poised to escalate a confrontation that briefly seemed to be ebbing Friday morning – when Deri granted Tlaib’s request on humanitarian grounds to see her grandmother in the Israeli-occupied West Bank.

This came after the Israeli government drew bipartisan criticism in Washington for refusing entry to Tlaib, D-Mich., and Rep. Ilhan Omar, D-Minn., as part of a broader visit.

But then Tlaib, in a scathing statement and set of tweets, announced she had decided not to go, saying "oppressive conditions meant to humiliate me would break my grandmother's heart."

Alleging that “racism and the politics of hate is thriving” in Israel, she wrote: "I have decided that visiting my grandmother under these oppressive conditions stands against everything I believe in--fighting against racism, oppression & injustice."

This was an apparent reference to Tlaib's earlier pledge not to promote boycotts of Israel during her visit. Tlaib indicated Friday that she did not want to abide by such restrictions.

"I can't allow the State of Israel to take away that light by humiliating me & use my love for my sity to bow down to their oppressive & racist policies," she said. 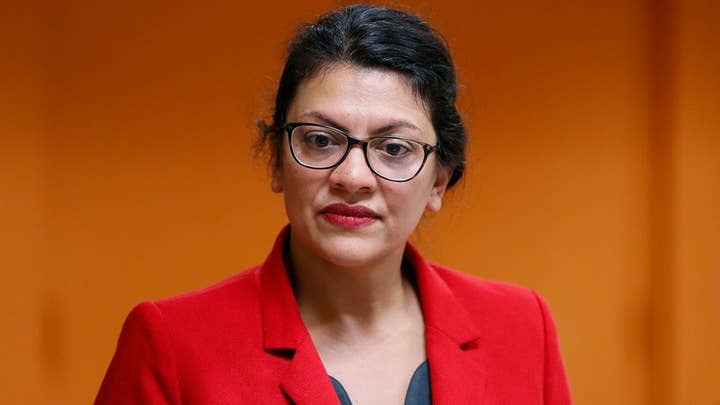 Deri responded on Twitter with skepticism, noting she had just sent a letter asking to visit her grandmother and saying it may be her last chance to do so.

“I approved her request as a gesture of goodwill on a humanitarian basis, but it was just a provocative request, aimed at bashing the State of Israel,” he wrote.

Her cancellation of the trip was the latest in a head-spinning series of reversals concerning plans by her and Omar to visit Israel.

The government earlier this year had signaled the two outspoken critics of Israel would be allowed to visit, for a trip planned for this weekend. But on Thursday, under pressure from President Trump, the government announced they would be blocked from entry -- citing their support for an anti-Israel boycott movement.

Still, the government said it would accept a humanitarian request from Tlaib, who then sent a formal request to Deri to visit her Palestinian grandmother in the West Bank.

“This could be my last opportunity to see her,” Tlaib reportedly wrote of her grandmother, who is in her 90s. “I will respect any restrictions and I will not promote any boycotts against Israel during my visit.”

Yet Tlaib on Friday likened the conditions to "silencing me & treating me like a criminal," saying: "It would kill a piece of me."

It remains unclear whether either congresswoman will make any new attempt to visit the region at this stage. Democratic lawmakers on Thursday blasted Israel's initial decision to block them as a sign of "weakness." Even pro-Israel lobby AIPAC came out against the move.

But Israeli Prime Minister Benjamin Netanyahu's official Twitter account said Thursday that the congresswomen's itinerary "revealed that they planned a visit whose sole objective is to strengthen the boycott against us and deny Israel's legitimacy."

Before Netanyahu made the announcement, Trump tweeted that allowing them in would show "great weakness."