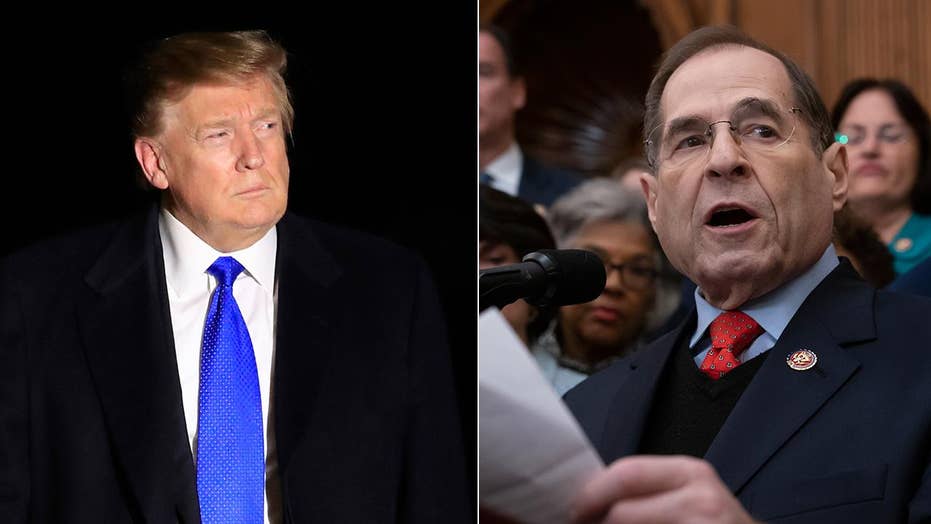 House Democrats opened a huge new avenue Monday in their investigations into President Trump, with the chairman of the Judiciary Committee firing off document requests to dozens of figures from the president's administration, family and business.

Chairman Jerry Nadler, D-N.Y., said Monday the committee served document requests to 81 agencies, entities and individuals, as part of a new probe into "alleged obstruction of justice, public corruption, and other abuses of power by President Trump."

"Over the last several years, President Trump has evaded accountability for his near-daily attacks on our basic legal, ethical, and constitutional rules and norms,” Nadler said in a statement. “Investigating these threats to the rule of law is an obligation of Congress and a core function of the House Judiciary Committee."

The White House confirmed Monday it had received a letter from Nadler.

“The House Judiciary Committee’s letter has been received by the White House,” Press Secretary Sarah Sanders said in a statement. “The Counsel’s Office and relevant White House officials will review it and respond at the appropriate time.”

The requests come on the heels of former Trump lawyer Michael Cohen's dramatic House testimony last week in which he raised questions about the president's personal finances, his charity and more even as he testified he had no evidence of collusion with Russia.

Nadler, who would oversee any impeachment proceedings against Trump, on Sunday first announced the document requests and said the goal of the probe was "to present the case to the American people about obstruction of justice, corruption and abuse of power" within the Trump administration.

Appearing on ABC’s “This Week,” Nadler said they were “issuing document requests to over 60 different people and individuals from the White House to the Department of Justice, Donald Trump, Jr., [Trump Organization CFO] Allen Weisselberg.”

Congressional Democrats have repeatedly promised to exercise tight oversight of the Trump administration since securing a majority in the House of Representatives in last November's midterms. But Nadler's comments signaled that Democratic leaders are not counting on Special Counsel Robert Mueller's forthcoming report on possible Russia collusion to mark the end of such investigations.

Asked by reporters Monday if he will cooperate with Nadler, Trump said, "I cooperate all the time with everybody. You know the beautiful thing: no collusion. It is all a hoax."

Nadler, in recent weeks, hired two veteran lawyers and Trump critics as the committee gears up to investigate the department and review Mueller's final conclusions. The lawyers, Barry Berke and Norman Eisen, have been retained on a consulting basis.

Nadler's committee has also called in the former acting attorney general, Matthew Whitaker, and plans to question him again in the coming weeks. Whitaker is a close Trump ally who had criticized the Mueller report before he was appointed. William Barr has since been confirmed as attorney general.

The Judiciary Committee isn't the only House panel planning to look into Trump aggressively. Massachusetts Democratic Rep. Richard Neal, the chairman of the House Ways and Means Committee, is expected to eventually try to obtain Trump's tax returns, which the president has refused to release. But for now, Neal is taking it slow.

Without naming Nadler, Trump tweeted Sunday that he was being "persecuted by some very bad, conflicted & corrupt people in a Witch Hunt that is illegal & should never have been allowed to start - And only because I won the Election!"

Meanwhile, Axios reported Monday that House Democratic leaders are hoping to use a series of hearings to effectively put Trump on trial.

Leaders are planning to roll out a “slow-bleed strategy with lengthy public hearings and scores of witnesses to methodically pick apart Trump's finances and presidency,” the outlet reported. A House leadership source told Axios the push is designed to avoid giving Trump a boost in 2020 by going the impeachment route, though it's unclear whether rank-and-file members eying impeachment would be satisfied with mere hearings.

“Many in leadership believe impeachment could help Trump get re-elected,” the leadership source said.

Fox News’ Jenny Buchholz and Liam Quinn and The Associated Press contributed to this report.