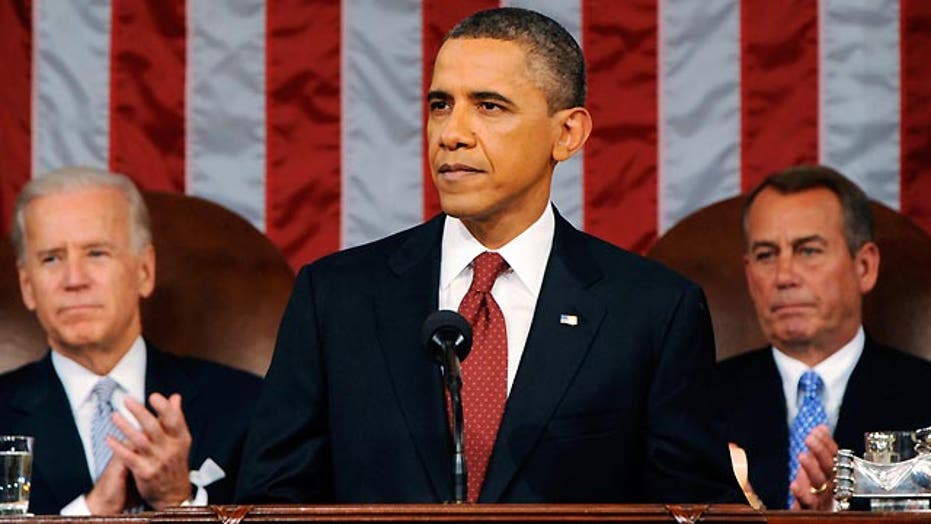 In keeping with tradition, first lady Michelle Obama has invited members of the military community to be among her honored guests at tonight’s State of the Union address. But if history is any gauge, the speech won't focus much on issues that matter to them.

A recent analysis by Stars and Stripes newspaper, a government-subsidized publication for the armed forces, showed that wars and veterans' policies made up between 10 to 20 percent of the past five State of the Union speeches given by President Obama, compared to his predecessor, George W. Bush, who spent nearly half of his State of the Union speeches on national security.

The data also shows that Bush mentioned the wars in Iraq and Afghanistan nearly 50 times in his last State of the Union address. The following year, in 2009, Obama mentioned those wars six times out of more than 6,000 words.

Rep. Mac Thornberry, R-Texas, the incoming chairman of the House Armed Services Committee, told Fox News that it's the job of the commander in chief to address his troops, particularly when they are fighting a war.

"What I'd like to hear is a lot more about national security and especially a lot more about Afghanistan," Thornberry said. "That's where our men and women are engaged in combat, in a war zone, and the president has not been talking about it, he's not been explaining what's happening and why it is important to our security. He's pretty much ignored it in the past and I think that's an injustice to them and an injustice to the country."

Paul Orzulak, a former speechwriter for President Clinton, says it’s understandable that Obama may not spend as much time discussing war as his predecessor. "If it was 2002 and Barack Obama had committed troops rather than been responsible for returning them home with the national mood what it was then, I think there would have been more talk of it," Orzulak said.

Among the first lady's guests Tuesday evening will be an Afghan war veteran, Sgt. 1st class Cory Remsburg, who suffered a brain injury from a roadside bomb on his 10th deployment. Vice Admiral Michelle Howard, the Navy's first African-American female to achieve a four-star rank in the history of the military, will also be in the first lady's gallery.