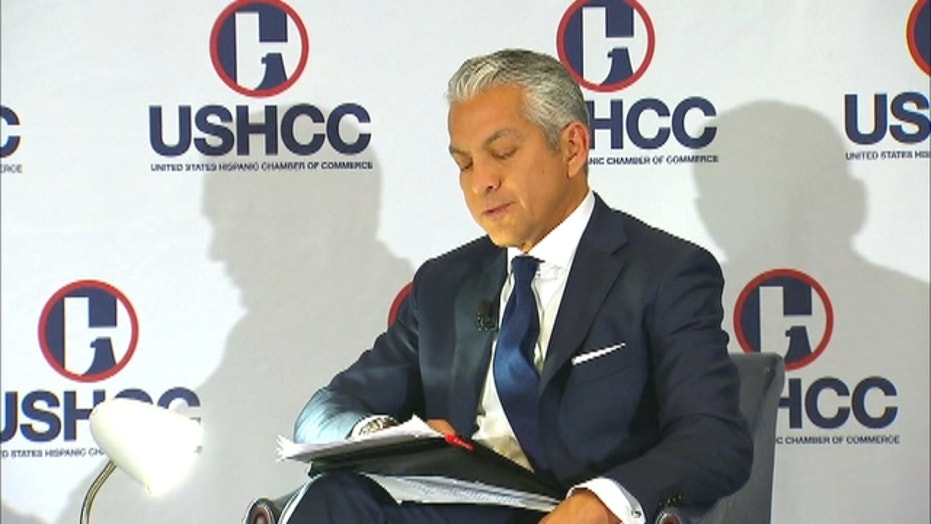 These men and women who would be president are part of the growing roster of candidates from both the Democratic and Republican parties who’ve sat – or were scheduled to sit – on stage to field questions, some grilling, before a roomful of Latino business leaders and media as part of the new Q&A series by the U.S. Hispanic Chamber of Commerce.

The chamber’s growing clout apparently spooked Trump, who agreed – in a private meeting with chamber officials as well as on Geraldo Rivera's radio show – to do a Q&A, but then abruptly backed out of the scheduled Oct. 8 event. Trump has insisted he never agreed to participate.

The publicity – and the firestorm of criticism toward Trump for backing out – has cast a spotlight on what has been the growing prominence and influence of the chamber as Latinos become an important voting bloc.

The chamber's Q&A's are, on many levels, significant and unprecedented. For nearly all the men and women seeking the land’s highest office, it provides their first and quite possibly only experience addressing – in English – issues and controversies that concern many Latinos as they field questions for a full 90 minutes by the chamber’s president, Javier Palomarez.

Palomarez said he hopes the Q&A's become a turning point in which prominent politicians see "the need to respect, empower, and include Hispanic Americans in the mainstream national dialogue.”

“Our mission has always been to place our community where it rightfully belongs, at the forefront of our country’s economic and political agenda,” said Palomarez. “My biggest hope is that through these efforts, America’s Hispanic community will help elect the next president — someone who will be their champion and help every person in this country attain the American dream.”

If presidential candidates have not been grilled extensively on Latino issues in a forum similar to that of the USHCC, it’s not for lack of trying by major Latino organizations.

To be sure, candidates have been keynote speakers at the annual gatherings of such prominent organizations as National Association of Latino Elected and Appointed Officials (NALEO), National Council of la Raza and the National Hispanic Chamber.

They’ve also taken part in scaled down Q&A’s by some organizations, though they have not been one-on-one.

But notably, those agreeing to make such appearances before Latino groups have been the exception – most of the time Democrats – with most preferring to avoid what they have seen as a no-win situation.

The nonpartisan Congressional Hispanic Caucus Institute expressed its frustration recently that it was able to get only two of all the presidential contenders in both major parties to agree to participate in its candidates’ forum at its annual public policy conference this week. It did not invite Trump.

NALEO, an influential organization that follows demographic trends, electoral participation and voting rights, among other things, had debate-like events featuring some presidential candidates in 2003, 2007 and 2008.

The executive director, Arturo Vargas, said it was impossible to get GOP candidates to participate. The only time a GOP candidate participated was when Sen. John McCain was the nominee, running against Barack Obama in 2008.

“It’s always been a challenge for us to attract Republicans, especially during primary season,” Vargas said. “In primaries, candidates run to the extreme of their parties. Once the nominees are chosen, then those nominees from both parties run to the center.”

Vargas said he is impressed by the USHCC’s ability to crack that barrier and get candidates from both parties so early in the process.

“It’s important to have an opportunity to have an in-depth conversation with candidates for the presidency,” Vargas said. “The value of these Q&A’s is that we Latinos, as a community, get to set the agenda on what gets discussed.”

Palomarez initially got the same reaction that Latino organizations long have received when they’ve approached candidates about participating in their events, even as just speakers.

“We were told not to count on any GOP candidates to engage us or any Hispanic organization before the primaries, out of fear of alienating the conservative base,” Palomarez recalled.

But the tide turned when Palomarez accused Ted Cruz of avoiding Latinos for fear of alienating his conservative supporters. Cruz’s campaign denied it, and accepted an invitation to participate in a Q&A in April.

Others have followed, from both parties.

Trump, who met privately with Palomarez in the summer and allegedly agreed to participate in a forum, backed out on Friday, quoted in a CNN interview as saying that he never said he’d do the Q&A. But in a Fox interview weeks earlier, Trump had said he was going to the Q&A though he was expecting a tough crowd.

“Mr. Trump was unwilling to abide by the terms and conditions of the USHCC's Presidential Candidate Q&A Series — the same rules that all participants have previously followed,” the organization said in a widely distributed email. “Withdrawing from the Q&A can only suggest that Trump himself believes his views are indefensible before a Hispanic audience.”

Trump’s scheduled appearance had elicited criticism from some Latino groups, including some local Hispanic chambers, who argued that giving the controversial candidate such attention was tantamount to dignifying him.

Palomarez shot back, saying he understood the criticism, but that it was wrong for the Latino community to deny itself the chance to challenge a candidate with views that offended, and could be harmful, to Latinos.

Cesar Vargas, co-director of the Dream Action Coalition (DRM), said it is important to have events such as the chambers that allow Latinos to assess candidates at a depth that is rare, especially at this juncture in the election cycle.

Some Latino organizations, he said, are swept up by the opportunity to have a high profile person at their event, and don’t challenge them.

“We challenged the National Council of La Raza when they invited President Obama to be their speaker, we were there to confront” because of his inaction on immigration, Vargas said. “After that, the NCLR president was more vocal, and referred to him as ‘Deporter-in-Chief.’”

But the chamber has frowned on attempts to shame leaders at its events, which happened at its annual convention in Texas, where Jeb Bush was keynote speaker and was heckled by a group of young immigrant activists.

The chamber quickly sent out a statement taking exception to the disruption, calling it counterproductive.

“I hope that as a result of our joint efforts as the leaders of Hispanic organizations, that the number 55 million – the number of Hispanics in America – is looked at with the same focus and emphasis as the number 270, the number of electoral votes needed to win,” Palomarez said. “We want to change the dialogue that has for too long defined my community."