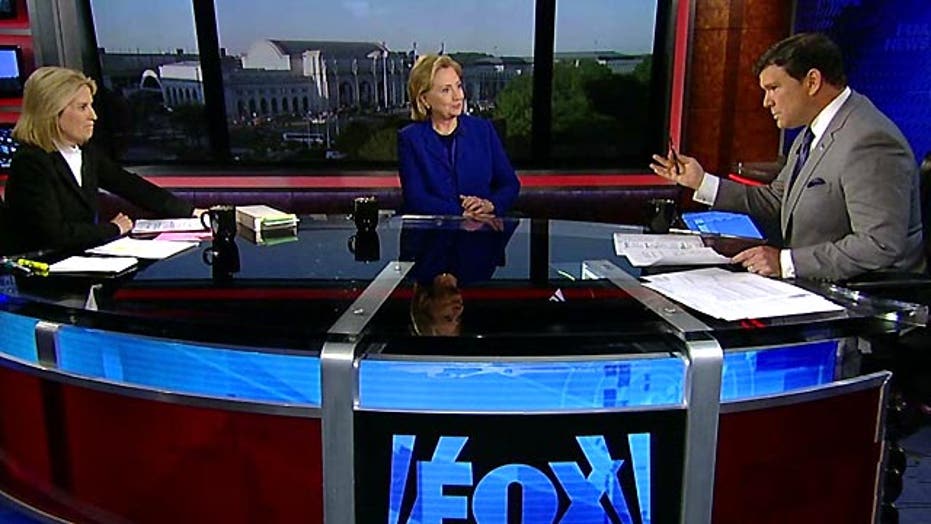 Hillary putting distance between herself, Obama?

It was brisk and businesslike, sober and substantive, almost like a lightning-round quiz on foreign and domestic issues.

The half-hour interview last night was a net plus for Hillary, who demonstrated a command of the facts and didn’t stumble. And it was a net plus for Fox News, which conducted an important sitdown with the Democratic presidential front-runner without acrimony. There was none of the testiness that marked some of her earlier TV interviews.

In fact, Hillary seemed upbeat as she emerged from Studio 1, praising the anchors’ energy and then posing for some pictures with onlookers. And perhaps Fox viewers learned a few things about the former secretary of State.

That she did this after an hourlong town hall on CNN, marked by mostly friendly questions from the audience, demonstrated a bit of stamina.

The challenge for Bret and Greta was obvious: How to extract fresh information (otherwise known as news) from a cautious front-runner who had already been working the television circuit.

For Hillary, the decision to make Fox a stop on her book tour is a healthy sign from a woman who has been wary of the media since her earliest days as first lady. If Barack Obama can sit down with Bill O’Reilly, there’s no reason that Hillary couldn’t engage with Baier and Van Susteren—and reach Fox’s sizable cable audience.

Baier devoted a major chunk of his questioning to Benghazi, trying to fill in some blanks in the timeline of what happened on that tragic night. Who did she talk to? Which emails did she see? What did she discuss with President Obama?

Some of the questions may have seemed incremental to those not steeped in the details of Benghazi, a story that Fox has pursued aggressively.

Asked why no one at the State Department had been fired over the fiasco, she said: “There’s a difference between getting it wrong and committing a wrong.” And rather than act defensive, she said, “I know you and your viewers have a lot of questions” and suggested they read the various investigative reports.

Hillary managed a bipartisan answer when asked whether Obama had ever disappointed her. She said she had “disagreed” with him, with George W. Bush and with her husband at times, but felt all were pursuing the national interest.

Van Susteren’s tone was more conversational, and as a talk show host she was free to be more opinionated. She elicited a number of interesting answers.

When Greta said that NSA surveillance violated the Fourth Amendment, Hillary talked about reviewing the post-9/11 laws and balancing the need for privacy and security, but did not weigh in on the need for court warrants. She did, however, criticize the administration for the “absolutely uncalled-for” eavesdropping on Angela Merkel.

In response to questions on Iraq, Clinton used some of her strongest language against Nouri al-Maliki, saying “he has failed as a leader” and has gone after Sunnis in a way that is “a recipe for continuing instability.”

Greta got a passionate response when she asked about Sgt. Andrew Tahmooressi, still detained in Mexico after taking a wrong turn across the border, with Hillary saying she would be “burning up the telephone wires” to rectify the “unacceptable” situation. “Maybe we need to raise the decibel level a little more.”

Perhaps the most emotional moment came when Greta asked about the passage in “Hard Choices” where Hillary said she refused an Obama campaign request to attack Sarah Palin. When Greta noted that there were even published rumors that Palin was not the real mother of her fifth child, born with Down syndrome, Hillary said: “I could not agree with you more Greta. Those kinds of personal attacks, and I’ve had my share…are despicable and should be called out.”

Earlier, with CNN’s Christiane Amanpour, Hillary also parried questions on Benghazi, saying it’s easy to “second-guess” after the fact. Asked by an audience member about Obama’s withdrawal from Iraq, Clinton blamed al-Maliki because he “would not accept” an agreement that would protect a residual force of American soldiers.

The crowd seemed so pro-Hillary that she fell into a joking mood, saying things like “I can be flattered. I wish it happened more often.”

And when Amanpour asked the 2016 question, it seemed a friendly moment: “Are your competitive juices flowing for the chance to be the first female president?”

Clinton laughed and said, “You can see why she’s an experienced journalist,” before giving her standard non-reply.

Hillary had a rocky book/campaign rollout last week and looked somewhat rusty. By the time she left the Fox Washington bureau, even her detractors would have to say she was on her game.