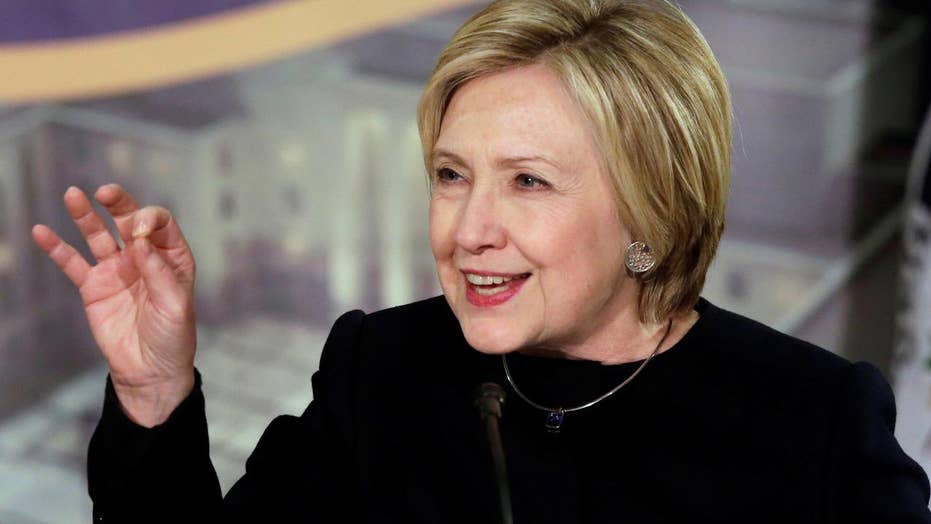 Hillary Clinton said Sunday in her first TV interview since Election Day that she was just “gobsmacked, wiped out” after losing the presidential election to Donald Trump.

Clinton, who is releasing a new memoir Tuesday titled “What Happened” that points fingers and accepts responsibility for her defeat, also told CBS News' "Sunday Morning" host Jane Pauley that she won’t ever run for office again.

“I am done with being a candidate, but I’m not done with politics because I believe that our country's future is at stake,” Clinton said during the interview at her home in Chappaqua, New York.

Asked how she was doing, Clinton confessed that the loss still stings.

“I think I am good, but that doesn’t mean I’m complacent or resolved about what happened,” she said. “It’s still painful.”

She said on election night she felt like she let everybody down.

“I had not drafted a concession speech,” Clinton said. “I had been working on a victory speech.”

She said post-election she went off on a “frenzy of closet cleaning,” drinking Chardonnay and walks in the woods. She recommends doing yoga.

“I couldn’t feel, I couldn’t think,” Clinton said. "I was just gobsmacked, wiped out.”

Clinton said she never thought of not going to Trump's inauguration as a former first lady.

"And so there I was on the platform, you know, feeling like an out of body experience," she said. "And then this speech [by Trump], a cry from the white nationalist gut."

She said that during the campaign Trump was quite successful “referencing a nostalgia” that would give hope, comfort and settle grievances for millions of people upset about gains made by others.

Clinton also defended her "basket of deplorables" comment about Trump supporters in the interview.

"Well, I thought Trump was behaving in a deplorable manner," she said. "I thought a lot of his appeals to voters were deplorable. I thought his behavior as we saw on the 'Access Hollywood' tape was deplorable. And there were a large number of people who didn't care. It didn't matter to them."

"They were already energized," she said.

Clinton said she practiced what she would do if Trump came up behind her during the debates and then she said when he did at the second debate in St. Louis, she became flustered.

"It was so discombobulating," she told Pauley. "And so -- while I'm answering questions, my mind is going, 'OK, do I keep my composure? Do I act like a president? Am I the person that people can trust in the end to make hard decisions?' Or do I wheel around and say, 'Get outta my space. Back up, you creep.' Well, you know, I didn't do the latter."

The interview concluded with Clinton saying the U.S. had a reality show that led to the election of a president.  "He ends up in the Oval Office," she said of Trump ."He says, ‘Boy, it’s so much harder than I thought it would be. This is really tough. I had no idea.’ Well, yeah, because it’s not a show. It’s real. It’s reality, for sure.”

"What Happened" is being published by Simon & Schuster, a division of CBS.

Coming so soon after the election, it's poised to re-live the 2016 campaign drama in the media for weeks, if not months, to come – as Democrats try to prepare for the 2018 midterms while also battling the Trump agenda.

Clinton already is taking some criticism — complete with mockery from late-night television hosts — for planning book-tour stops in the Great Lakes and Midwestern states that ultimately cost her the election. But she writes that her campaign had more staff and spent more on advertising in both Michigan and Pennsylvania, two states she lost, than President Barack Obama did when he won them in 2012.

She acknowledges that "if there's one place where we were caught by surprise, it was Wisconsin," saying that polls showed her ahead until the end. But while she did not visit the state in the fall, she noted that her surrogates blanketed the state.

In Wisconsin, Democratic pollster Paul Maslin called it a "bitter irony" that Clinton is now trying to reach voters — or consumers — in states he believes her campaign mostly ignored.

But he said it's ultimately a sideshow from a has-been.