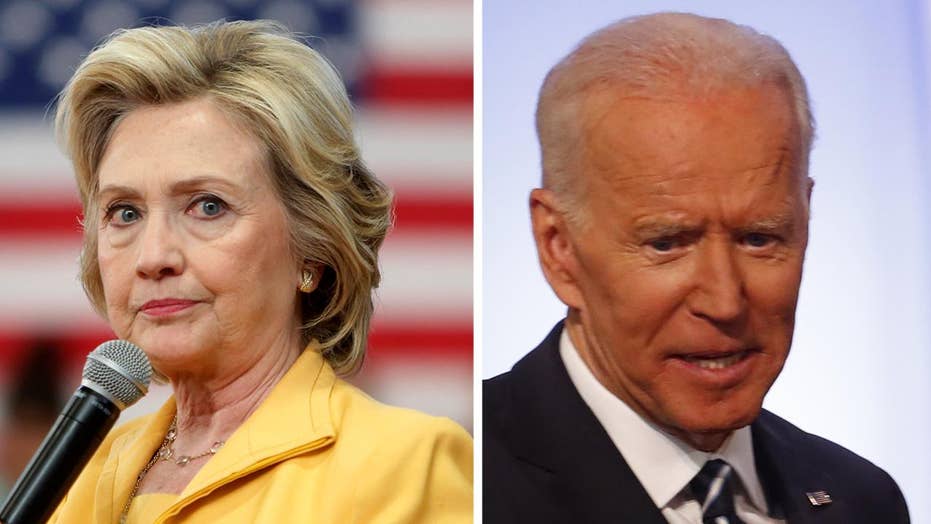 Brian Fallon says Hillary Clinton would have been 'dragged for days as out of touch' if the former Democratic presidential nominee made the same mistake as Joe Biden and flubbed instructions for contacting her campaign; reaction and analysis on 'Outnumbered.'

Failed Democratic presidential nominee Hillary Clinton will host a pricey fundraiser at her Washington, D.C., mansion as her party struggles to match the size of Republicans' growing war chest before 2020.

The event, set for October 16, seems to mark the first major form of activism in support of the Democratic Party's electoral efforts. Politico reported on Tuesday that the event -- titled "Dinner and conversation at the home of Hillary Rodham Clinton" -- will offer tickets as high as $50,000.

Most of the 2020 Democrats have focused their attention on bashing President Trump, apparently avoiding public criticism of Clinton's attempt to beat him in 2016. The Democratic National Committee (DNC) had millions in debt after that election and appeared to try and correct the strategy it employed during Clinton's run.

In places like Wisconsin -- and other states that went for Trump in 2016 -- Democrats are working to fix the mistakes of 2016 when they seemed to take Clinton’s ascent to the White House as a given. Now, they're using technology, voter engagement, and local organizing as the top tools in the fight to unseat Trump and win local elections.

“We understand that if we are not only going to win elections at the top of the ticket but also down-ballot, we need to start talking to people now,” Xochitl Hinojosa, the communications director for the DNC, said. “So that was the biggest thing that we’ve learned is that you have to talk to people, and you have to build a relationship with them.”

Meanwhile, Republicans have ramped up their ground game and vastly outpaced fundraising from the DNC.

Receipts for June totaled $20.8 million -- the highest the Republican National Committee (RNC) has seen for that month outside an election year. That record-breaking figure followed numbers from its second quarter of 2019 when it, along with President Trump's campaign entities, raised $108 million.

Heading into the 2020 election, the RNC already amassed $117.9 million for the cycle and had $46.6 million in total cash on hand in July, according to a press release from Tuesday. The party's second quarter saw $123.7 million in combined cash on hand.