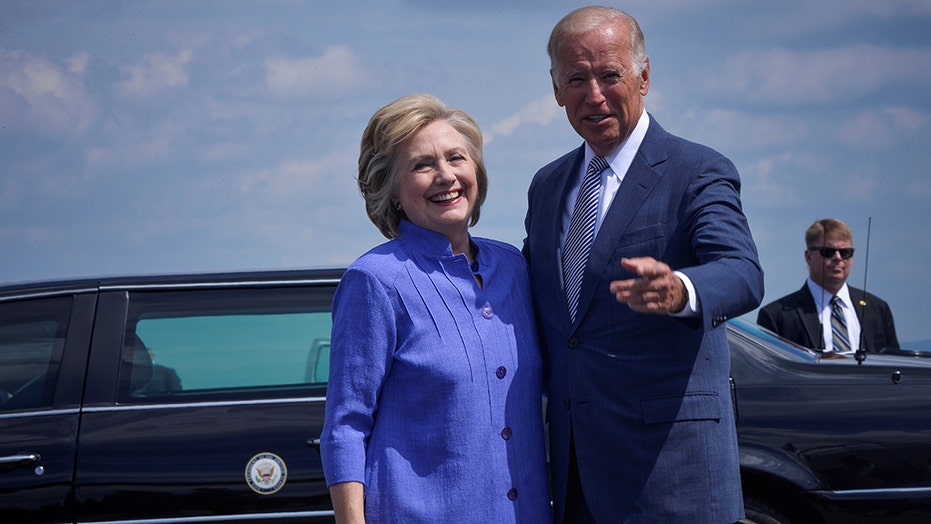 Hillary Clinton, the 2016 Democratic presidential nominee, announced Tuesday she will join Joe Biden, the party's presumptive 2020 nominee, in a virtual town hall Tuesday afternoon -- where she's expected to formally back his campaign.

The former first lady, senator and secretary of state has not yet formally endorsed Biden. But a Democratic source confirmed to Fox News that Clinton will indeed endorse Biden at the 3 p.m. event.

Clinton said on Twitter she was “excited” to join Biden as a "surprise guest" for the town hall.

“I’m with her,” Biden responded.

The Trump campaign wasted no time in hitting back at both Democrats.

“There is no greater concentration of Democrat establishment than Joe Biden and Hillary Clinton together," Trump campaign manager Brad Parscale said in a statement. "Both of them carry the baggage of decades in the Washington swamp and both of them schemed to keep the Democrat nomination from Bernie Sanders. President Trump beat her once and now he’ll beat her chosen candidate."

The virtual town hall at 3 p.m. Tuesday will focus on the impact of COVID-19 on women. The female-focused event comes as Biden has remained silent while facing mounting pressure to address allegations of sexual assault leveled against him by former staffer Tara Reade.

Reade publicly accused Biden of sexual assault in a podcast on March 25, and Biden has remained silent on the claims. No one in the media has asked Biden directly about the accusations either.

It’s not clear if Biden will respond to the accusations during the call with Clinton. But Clinton herself has repeatedly said she stands with sexual assault victims, including tweeting in 2015: “You have the right to be heard and believed. We're with you.”

Biden's public silence has continued even after a "Larry King Live" clip from 1993 resurfaced this weekend, appearing to feature Reade's mother alluding to “problems” her daughter faced while working as a staffer for the then-U.S. senator from Delaware.

And on Monday, Business Insider reported more independent, contemporaneous support for Reade's claim from a former neighbor. That corroboration followed The Intercept's reporting that Reade's brother and friend had also backed her allegation, saying they had heard about her claim at the time.

Yet, only Biden’s campaign has addressed the claim: “What is clear about this claim: it is untrue. This absolutely did not happen,” Biden Deputy Campaign Manager Kate Bedingfield told Fox News in a statement.

Fox News' Paul Steinhauser and Gregg Re contributed to this report.