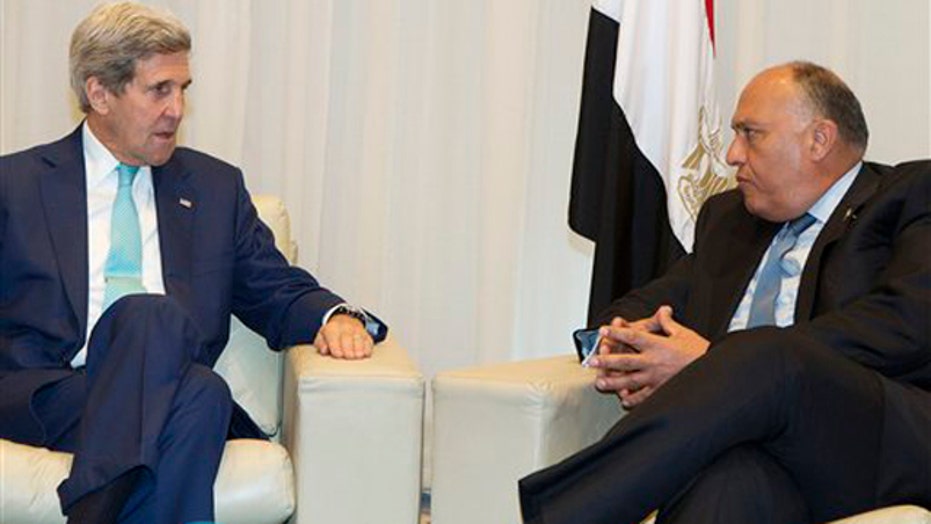 Amb. John Bolton on if the 'gaps' can be bridged

The Obama administration is ramping up pressure on congressional critics of a pending Iran nuclear deal as it pushes to strike some kind of agreement by the end of the month -- at a time when key foes may be sidelined by their own political storms.

White House Chief of Staff Denis McDonough over the weekend sent a stern warning to Congress to stand down from interfering in the talks. He wrote to Senate Foreign Relations Committee Chairman Bob Corker, R-Tenn., claiming pending legislation that would give Congress a vote on any nuclear agreement would have a "profoundly negative impact" on negotiations.

"Let us complete the negotiations before the Congress acts on legislation," he wrote.

Administration officials and other Democrats also have slammed Republican senators over an open letter penned a week ago to Iran's leaders challenging President Obama's authority to strike a deal.

Corker did not sign that letter. But the main author, Sen. Tom Cotton, R-Ark., defended it on Sunday, telling CBS' "Face the Nation" he has "no regrets at all" about sending it.

The nuclear talks resumed Sunday in Switzerland, with the U.S. and other world powers facing an end-of-March deadline to reach a framework deal.

The latest warning from the White House comes as Israeli Prime Minister Benjamin Netanyahu, arguably the most vocal critic on the world stage of the pending deal, faces a tough election on Tuesday.

According to The Washington Post, Netanyahu warned supporters at a rally over the weekend that he and his Likud party could lose. Netanyahu could technically remain as Israel's leader even if Likud loses -- if he can build a majority coalition in the Knesset.

But even if he emerges the victor, the sheer task of building that coalition could distract Netanyahu for weeks, giving Secretary of State John Kerry and other negotiators some rhetorical room to complete an Iran deal.

How concrete an agreement they might reach, however, remains to be seen.

Two weeks out from a deadline for a framework accord, some officials told The Associated Press negotiators would likely settle for an announcement that they've made enough progress to justify further talks.

Such a declaration would hardly satisfy American critics of the Obama administration's diplomatic outreach to Iran and hardliners in the Islamic Republic, whose rumblings have grown more vociferous as the parties have narrowed many of their differences. And, officially, the United States and its partners insist their eyes are on a much bigger prize: "A deal that would protect the world," Kerry emphasized this weekend, "from the threat that a nuclear-armed Iran could pose."

Yet as Kerry arrived in Switzerland over the weekend for several days of discussions with Iranian Foreign Minister Mohammad Javad Zarif, no one was promising the breakthrough. One diplomat said new differences surfaced only in the last negotiating round of what has been a 15-month process, including a sudden Iranian demand that a nuclear facility buried deep underground be allowed to keep hundreds of centrifuges that are used for enriching uranium - material that can be used in a nuclear warhead.

Previously, the Iranians had accepted the plant would be transformed into one solely for scientific research, that diplomat and others have said.

The deal that had been taking shape would see Iran freeze its nuclear program for at least a decade, with restrictions then gradually lifted over a period of perhaps the following five years. Washington and other world powers would similarly scale back sanctions that have crippled the Iranian economy in several phases. Iran says it is only interested in peaceful energy generation and medical research, but much of the world has suspected it of maintaining covert nuclear weapons ambitions.

The charges reportedly concern allegations he used his office to help a Democratic donor.

Menendez insisted earlier this month, "I am not going anywhere."

Corker, meanwhile, has not said definitively what he would do with the legislation that would seek a vote in Congress on a nuclear deal.

His office said in response to the White House letter: "On this issue where Congress has played such a vital role, I believe it is very important that Congress appropriately weigh in before any final agreement is implemented."