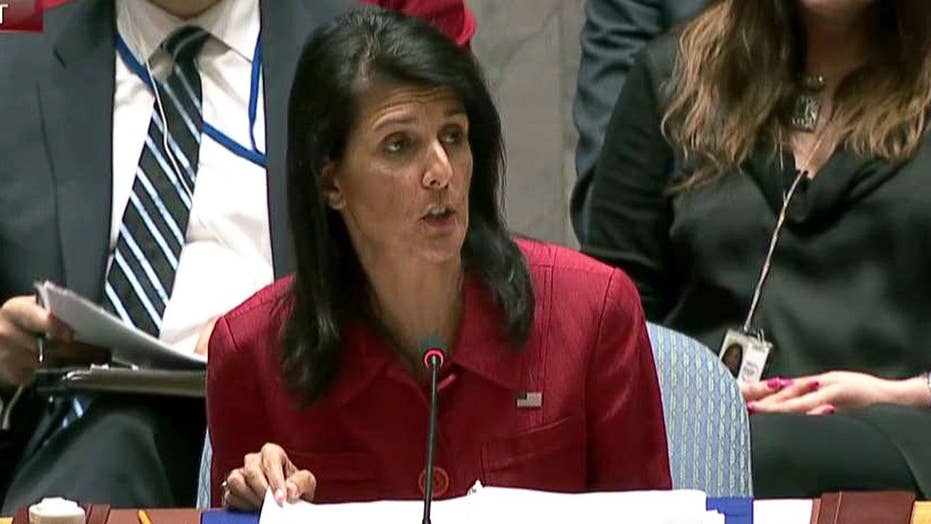 Amb. Haley: US prepared to do more on Syria

U.S. Ambassador to the U.N. Nikki Haley forced Bolivia to "defend the atrocities of the Syrian regime" in "full public view" on Friday, after the country's ambassador requested a closed session to discuss President Trump's strikes in Syria.

Haley revealed the Bolivian ambassador's request for a private emergency session of the U.N. Security Council in a written statement Friday morning.

She countered: "The United States, as president of the Council this month, decided the session would be held in the open. Any country that chooses to defend the atrocities of the Syrian regime will have to do so in full public view, for all the world to hear.”

At the session, Haley stood by the U.S. actions, and said that when the international community fails to act, it is up to individual states to act themselves.

Haley also questioned Russia’s role in carrying out a deal to remove chemical weapons -- arguing that either Moscow knew about the weapons, was “incompetent” in removing them, or was played “for fools” by Assad. She went on to warn that more U.S. action could be on the table.

“The United States took a very measured step last night. We are prepared to do more. But we hope that will not be necessary,” she said.

"The United States will no longer wait for Assad to use chemical weapons without any consequences. Those days are over." - @NikkiHaley pic.twitter.com/PMb24zpPId

The session itself was fiery.

Russian ambassador Vladimir Safronkov blasted the United States for trying to impose an “irresponsible geopolitical project” on the world, and warned of “extremely serious” consequences.

Meanwhile Syrian Ambassador Bashar Ja'afari  condemned what he called “a barbaric, flagrant of aggression” and a violation of the U.N. charter.

“This act makes America a partner of ISIL, Al-Nusra and other terrorist groups,” he said.

The visibly aggravated Bolivian ambassador -- Sacha Sergio Llorenty Soliz – used his time to tear into what he called an “extremely serious violation of international law”  and “an imperialistic action” by the United States.

“We believe it is the duty of the Security Council, of the United Nations organizations, to defend multilateralism … we are here to defend it,” he said.

He went on to brandish not only a copy of the U.N. Charter, but also a large photograph of former Secretary of State Colin Powell addressing the Security Council in 2003 about the alleged threat of Weapons of Mass Destruction in Iraq. Soliz went on to argue that there were no WMDs found in Iraq then, and that the council should therefore be skeptical of the United States now.

Soliz’s remarks were immediately met by stern criticism by U.K. Ambassador Matthew Rycroft, who backed the U.S. action and claimed the Bolivian ambassador was “more outraged at the United States than the Assad regime.”

“The United Kingdom supports the U.S. airstrike … because war crimes have consequences,” he said, calling the strike “a proportionate response to unspeakable acts.”

Rycroft also mocked the Russians, saying Assad had “thumbed his nose” at Russia’s calls for Assad to engage in peace talks.

“Russia sits here today humiliated by its inability to bring to heel a puppet dictator,” he said.

Other members took more restrained approaches. Italian Ambassador Sebastiano Cardi called for the Security Council to redouble its efforts to seek a U.N.-led political transition from the Assad regime, while French Ambassador Francois Delattre said Assad’s crimes should not go unanswered, and renewed calls for the U.N. to take charges to the International Criminal Court – but noted that such efforts have been vetoed by Russia.

Delattre called the strikes by America a “legitimate” response and a sign that use of chemical weapons will not be tolerated, but warned that a solution will not be reached by military means alone.