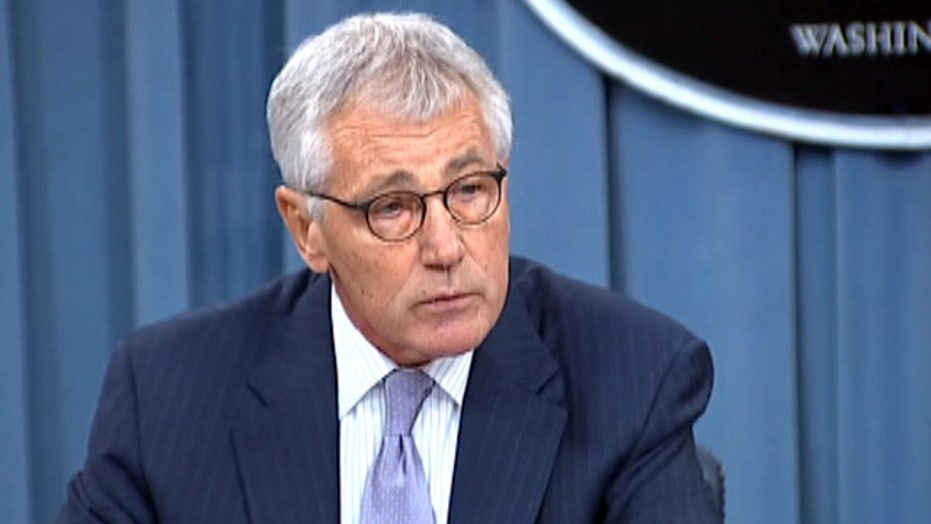 Hagel: We all regret the US rescue mission did not succeed

Defense Secretary Chuck Hagel issued a dire warning Thursday about the threat posed by the Islamic State terrorist group, saying the organization is "beyond anything that we've seen."

Hagel spoke at a press conference in which he addressed the execution of American journalist James Foley, at the hands of terrorists from the group, also known as ISIS or ISIL. The U.S. military continues to launch airstrikes against Islamic State targets in northern Iraq, in support of Iraqi and Kurdish forces, but Hagel suggested more action may be necessary.

"ISIL is as sophisticated and well-funded as any group that we have seen," Hagel said. "They're beyond just a terrorist group. They marry ideology, a sophistication of strategic and tactical military prowess. They are tremendously well-funded. Oh, this is beyond anything that we've seen. So we must prepare for everything."

He said the only way to do that is take a "cold, steely hard look" and "get ready."

The U.S. has restricted its military action to Iraq, but concerns have increased as the Islamic militant group extends its reach from safe havens in Syria across the Iraqi border.

Speaking alongside Hagel at a Pentagon news conference, Army Gen. Martin Dempsey said that although the Islamic State group can be contained it cannot be defeated without attacking it in Syria.

Dempsey, chairman of the Joint Chiefs of Staff, said this would not necessarily require airstrikes by the U.S., although Hagel appeared to leave open that possibility by telling reporters, "We're looking at all options."

Dempsey, who served multiple tours in Iraq during the 2003-2011 war, was pointed in his comments about what it would take to ultimately defeat the Islamic State group.

"They can be contained, not in perpetuity," Dempsey said. "This is an organization that has an apocalyptic, end-of-days strategic vision and which will eventually have to be defeated.

"To your question, can they be defeated without addressing that part of their organization which resides in Syria? The answer is no. That will have to be addressed on both sides of what is essentially at this point a nonexistent border.

"And that will come when we have a coalition in the region that takes on the task of defeating ISIS over time," Dempsey added, using another acronym for the group. "ISIS will only truly be defeated when it's rejected by the 20 million disenfranchised Sunni that happen to reside between Damascus and Baghdad."

President Obama has resisted calls to insert the U.S. military in the middle of Syria's war, a cautious approach his critics say has allowed the Islamic State to strengthen there and make gains across the border in Iraq.