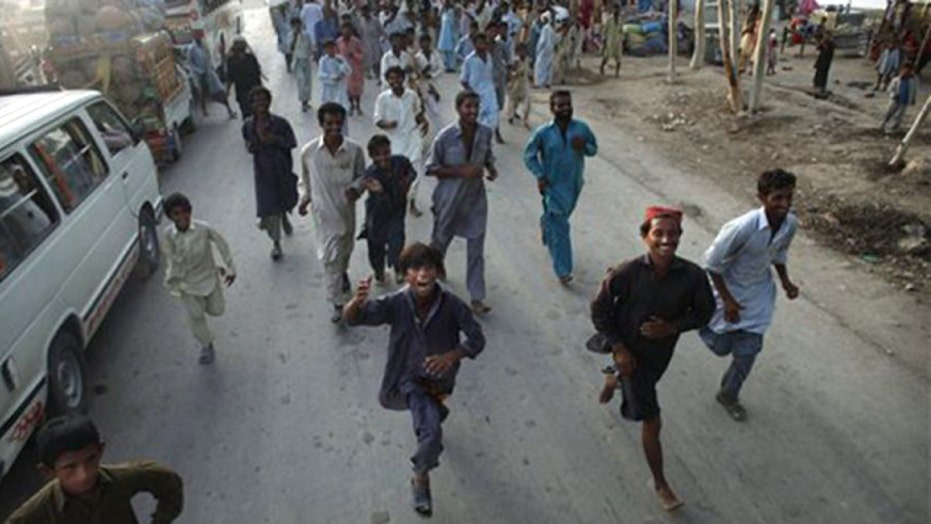 US resuming aid to Pakistan as national debt passes $17T

Should America be handing over $1.6B?

As the national debt tops $17 trillion -- thanks to the newly sealed debt-ceiling agreement -- America's costly foreign aid tab is back in the crosshairs.

The federal government in fiscal 2012 spent about $21 billion on non-military foreign assistance and was on track to spend roughly the same in 2013, according to federal records. As Washington enters the new fiscal year, another huge chunk of aid is being released -- the Associated Press reported over the weekend that the U.S. is planning to free up more than $1.6 billion in aid to Pakistan following a lengthy hiatus.

Daniel Markey, a senior fellow with the Council on Foreign Relations, suggested Monday that the aid decision was premature. He told FoxNews.com Live that the U.S. should at least be changing the way that money is used.

"We haven't gotten a lot out of Pakistan ... and we've spent billions and billions of dollars," Markey said Monday.

He said new leadership in Pakistan offers a reason to keep trying "but we should be very careful."

The aid had been on ice after a major breakdown in U.S.-Pakistan relations. Pakistan lashed out at the U.S. over the 2011 raid on Usama bin Laden's compound. U.S. lawmakers were similarly outraged after Pakistan imprisoned a doctor alleged to have helped the CIA in tracking bin Laden.

Ties continued to fray after the U.S. mistakenly fired on and killed two dozen Pakistani soldiers.

But after a long pause, and an election in Pakistan, both sides are trying to rebuild their relationship.

Newly elected Pakistani Prime Minister Nawaz Sharif arrived in the U.S. on Sunday, for the first visit by a Pakistani head of state since 2008, and met with Secretary of State John Kerry. In a statement, the State Department said they "continued the robust dialogue on our shared goal of a stable, secure and prosperous Pakistan." The statement stressed the importance of "continued counterterrorism cooperation."

Aid to Pakistan over the years has been channeled to everything from health to education to economic development.

But it is Pakistan's role in counterterrorism operations that has made the U.S. so reluctant to cut ties with the country altogether. Despite suspicion running high between the two governments -- and concerns that some Pakistani officials are taking U.S. money with one hand and helping America's enemies with the other -- many in Washington see the partnership as one of necessity.

Markey, author of "No Exit from Pakistan: America's Tortured Relationship with Islamabad," said the U.S. still needs the supply lines in and out of Afghanistan as that war winds down. But he said the U.S. should be "skeptical."

The battle over how much to give to which countries has been escalating in Washington, and Republicans have made it a perennial target as they seek additional savings.

Amid the resumption of aid to Pakistan, the Obama administration recently decided to put some aid to Egypt on hold. The decision came after then-President Mohammed Morsi was overthrow.