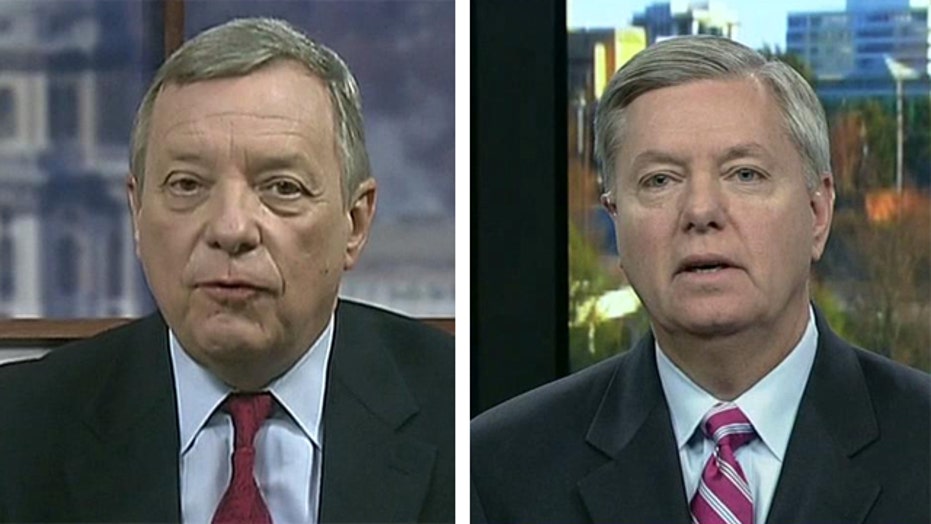 A top Senate Republican on Sunday called for a special or independent counsel to investigate the Justice Department tracking the phone calls and emails of a Fox News reporter, saying Attorney General Eric Holder was too involved in the process to be objective.

Holder “signed off on the affidavit,” Sen. Lindsey Graham, R-S.C., a member of the Senate Armed Services Committee, told “Fox News Sunday.”  “This would be a good time for a special counsel or independent counsel. ... This is clearly an overreach.”

The Justice Department search warrant stated investigators had probable cause to think Rosen had violated the federal Espionage Act and that he might have aided or abetted others or was a co-conspirator.

“James Rosen is a lot of things, but not a criminal co-conspirator,” Graham said.

The disparity about whether the Justice Department contacted Fox News about the investigation became more clear this weekend when an official for Fox News said parent company News Corp. was notified by letter in 2010 about an investigation. But Fox News was not directly notified, and the letter was never passed down to the network. Email was not included in that notification.

"While we don't take issue with the DOJ's account that they sent a notice to News Corp, we do not have a record of ever having received it," said a News Corp. spokesperson. "We are looking into this matter."

Holder has already recused himself from an investigation into the Justice Department looking into the phone records of the Associated Press, related to a May 2012 story that included information about a foiled plot in Yemen to bomb a U.S.-bound airliner.

That Holder approved the Justice Department searches appears to contradict earlier statements before Congress in which he said accessing reporters’ phone logs was “not something I’ve ever been involved in, nor would I think is a wise policy.”

Later on the show, Illinois Democratic Sen. Dick Durbin disagreed with Graham, following most congressional Democrats and Republicans who want more time for their own investigations and point out a special prosecutor would be appointed by the Justice Department.

"I heard Senator Graham call for special counsel,” said Durbin, the Senate assistant majority leader. “I'm not ready to do this at this point. I'd like to know if Holder has any conflict in here beyond what we've heard when it comes to the Fox case.”

Last week, Massachusetts Democratic Rep. Richard Neal was among those who argued against having a special prosecutor.

"The history of Congress with special prosecutors has not worked very well," he said. "The history of it with Congress is that it went well beyond what was fully intended. The investigations really became endless and boundless, and that's the imminent danger here."