Iran's foreign ministry says it will never be ready to negotiate now that the Trump administration has imposed new sanctions; Kristin Fisher reports.

Three GOP senators this week urged President Trump to reject what they describe as Iran’s ‘nuclear blackmail’ in the wake of the rogue nation’s violation of the 2015 nuclear agreement -- and highlighted the use of a mechanism in the U.N. resolution enshrining the deal that allows for a “snapback” of sanctions.

“Regime officials have signaled they intend to creep towards a nuclear weapon, while demanding concessions and promising to ‘reverse’ their violations if their demands are met,” Sens. Ted Cruz, R-Texas, Tom Cotton, R-Ark., and Marco Rubio, R-Fla., wrote in a letter Tuesday. “We urge you to reject their nuclear blackmail.”

Iran recently began stockpiling low-enriched uranium beyond agreed limits, in violation of the 2015 Joint Comprehensive Plan of Action (JCPOA), and have warned that more violations could soon be coming.

Given that it was United Nations Security Council resolution 2231 that endorsed the Obama-era deal, the Council could be the site of the next stage in deciding the embattled deal’s fate. Trump pulled the U.S. out of the deal last year, having described it as “the worst deal in history,” and the administration has since imposed waves of crippling economic sanctions on Tehran.

The senators urge Trump to invoke the so-called “snapback mechanism” in resolution 2231 that would restore sanctions on Iran’s uranium enrichment and missile development.

And while Security Council diplomats seek to work out how the U.S. will re-impose the sanctions given that it quit the deal last year, the letter from the senators notes that the U.N. resolution enables the original parties to the deal to revoke or snapback at any time.

“Paragraph 10 of the resolution defines the United States as a participant for the purpose of invoking the mechanism. We urge you to do so,” the senators wrote.

The lawmakers also call on the president to cease the use of “civil-nuclear waivers” that they say allows Iran to keep a nuclear status quo.

While the preferred mechanism for disputes in the JCPOA is that they be dealt with by a joint commission of eight members to decide if it goes to the Security Council, Tehran’s threats to enrich uranium mean the process of bringing the snapback mechanism into effect will sooner rather than later be tested.

From 2006 onwards the Council passed six resolutions that imposed severe sanctions on Iran in order to halt its nuclear ambitions by banning Iran from conducting nuclear research and developing ballistic missiles.

The senators letter also claimed that the deal “was built to enable Iranian cheating” and allowed hundreds of billions of dollars to flow into regime coffers, “allowing the Iranians to boost its military and terrorist activities regionally and globally, even as they maintained nuclear weapons infrastructure, periodically exceeded restrictions on nuclear materials.”

“That’s how the deal was always supposed to work, that’s how it did work, and that’s why it is imperative that the United States now respond forcefully to Iran’s systematic violations by ending civil-nuclear waivers and invoking the U.N. snapback,” the senators argued.

It is unclear how such a move would be received by America’s European allies at the Security Council -- who opposed the U.S. departure from the deal, and who have fought to keep the compact intact. 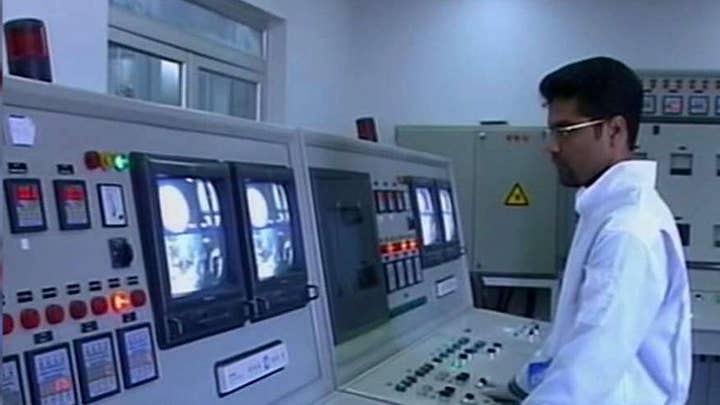 Behnam Ben Taleblu a Senior Fellow at the Foundation for Defense of Democracies in Washington D.C. told Fox News that if the snapback mechanism is used and resolution 2231 is done away with, “it would also mean the Rouhani government’s policy of playing both sides of the Atlantic against one another would have failed.”

A source familiar with the administration’s discussions on the use of snapback told Fox News that there are ongoing interagency talks happening now about using the mechanism.

An indication of the interagency discussions came earlier in the week from Secretary of State Mike Pompeo, whose statement on Iran’s violation called on the international community to restore its longstanding requirement of not allowing any uranium enrichment for the regime’s nuclear program in light of Iran’s latest violation.

His statement pulled no punches as he noted that “no nuclear deal should ever allow the Iranian regime to enrich uranium at any level. Starting in 2006, the United Nations Security Council passed six resolutions requiring the regime to suspend all enrichment activity. It was the right standard then; it is the right standard now.”

A senior GOP congressional staffer told Fox News: “Snapback is quickly becoming the only game in town, now that Iran has violated the deal.”

The staffer told Fox that, even though the U.S. left the deal, the administration still has every right per the resolution to put the snapback mechanism into play.

“There's no technical reason the Trump administration can't just do it and quickly restore the international sanctions from before the deal,” the staffer stated, adding that some officials wanted to hold off while the Europeans negotiated with Iran to stay in bounds.

“Now that the Europeans have failed and the Iranians are engaged in nuclear blackmail, there's no reason left to hold off.”