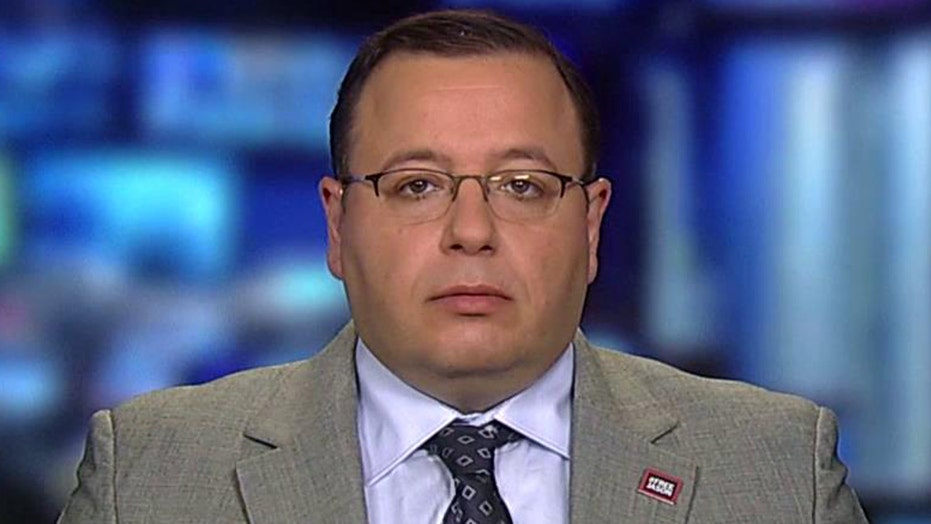 Jailed US reporter's family in dark about conviction in Iran

Congressional Republicans urged the Obama administration to hit pause on the implementation of the Iran nuclear deal after a secret Iranian court reportedly convicted Washington Post journalist Jason Rezaian in a trial being decried as a "sham."

"President Obama's gamble that a nuclear deal would lead to a more responsible Iran has already failed. This sham of a trial violated every international standard and made a mockery of Iran's own legal system," House Speaker John Boehner said in a statement.

The renewed pressure comes as Iran's parliament voted Tuesday to support implementing the nuclear deal, sending the measure to a council of senior clerics who will review the accord before its final approval.

The Rezaian conviction, reported by Iran's state TV late Sunday, followed months of pleas from his family, his supporters and The Washington Post to scrap the proceedings. It was not immediately clear of what exactly Rezaian had been convicted. He had faced multiple charges, including espionage, at his trial, which was widely criticized by the U.S. government and press freedom organizations.

Republican lawmakers who pushed, unsuccessfully, to link winning the freedom of American prisoners in Iran to the Iran nuclear deal renewed their concerns following the verdict.

Boehner noted that the regime that "wrongly convicted" the reporter is the same "that will be trusted to inspect itself under a nuclear deal that will give Iran legitimacy and billions in cash."

"President Obama needs to think long and hard before moving forward," he said.

Reps. Peter Roskam, R-Ill.; Lee Zeldin, R-N.Y.; and Mike Pompeo, R-Kan., also released a statement saying the lives of Rezaian and other American prisoners -- including Amir Hekmati and Saeed Abedini -- should not be a "concession" in the nuclear deal.

"We urge the Obama Administration not to lift any economic sanctions until Iran vacates this absurd judgment and releases all four Americans wrongly imprisoned by Iran. It is disgusting to reward a country that so brazenly violates international law and abuses our fellow citizens," they said.

"Iran has behaved unconscionably throughout this case, but never more so than with this indefensible decision by a Revolutionary Court to convict an innocent journalist of serious crimes after a proceeding that unfolded in secret, with no evidence whatsoever of any wrongdoing. For now, no sentence has been announced," Baron said in a statement Monday.

Rezaian reportedly faces up to 20 years in prison if convicted on all charges.

Baron reiterated the Post's position that Rezaian is innocent and that he should be exonerated and set free.

The U.S. State Department, which has not had formal diplomatic relations with Iran since the 1979 hostage crisis, yet recently completed negotiations on a deal lifting economic sanctions in Iran, was awaiting confirmation Monday that Rezaian had been found guilty.

"We continue to closely track the news coming out of Iran concerning the trial of U.S. citizen Jason Rezaian," said State Department spokesman John Kirby. "We've seen news reports that Jason has been convicted, but we still have not seen any official confirmation of a verdict on specific charges or any further information. Unfortunately, this is not surprising given that this process has been opaque and incomprehensible from the start. Regardless of whether there has been a conviction or not, we continue to call for the government of Iran to drop all charges against Jason and release him immediately."

White House Press Secretary Josh Earnest reiterated Tuesday that the state of the case is unclear, but called it a "sham process."

Jason's brother Ali Rezaian told Fox News' "On the Record with Greta Van Susteren" that a prisoner swap with Iran might be an option.

He said it was "outrageous" that the Iranians floated the idea but at this stage, "maybe that's the direction to go if that's the case. You know, Jason just needs to get out. It's been over a year he has been held, he didn't do anything wrong, he should come home."

He said the family has been in touch with the State Department "on and off."

"What we know is they are still talking with the Iranians. I think both governments have said they are in discussion about citizens but we don't know much more about that," he said Monday.