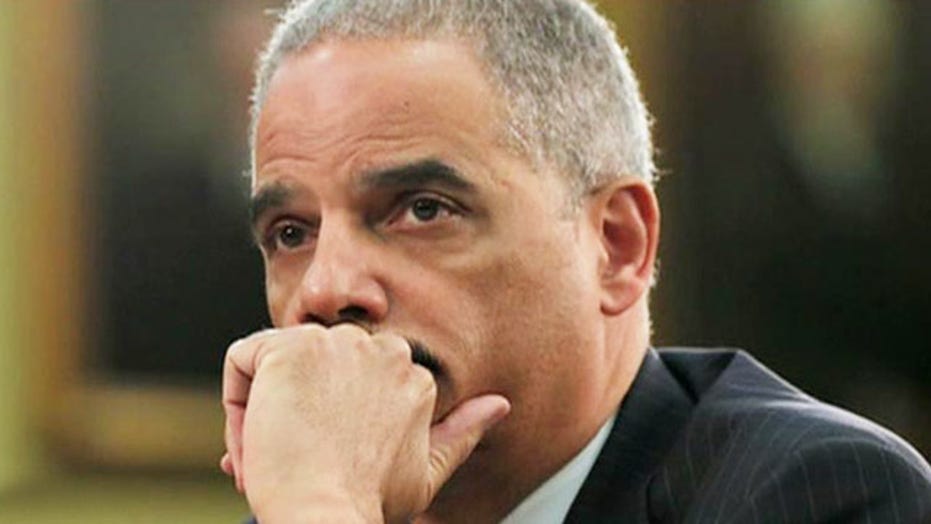 Is Holder being held accountable for DC scandals?

Republican lawmakers want to haul Attorney General Eric Holder back to the Hill to explain questionable testimony he gave on reporter surveillance -- though they are stopping short of issuing a subpoena.

In a letter sent Thursday to the attorney general, Republican leaders of the House Judiciary Committee urged Holder to testify on June 18, or some other date before the end of the month. They say his department's prior response to date "still fails to fully and adequately answer our questions."

They want Holder to explain his May 15 testimony.

At the time, the attorney general said under oath he knew nothing of the "potential prosecution" of the press. Days later, it emerged that Holder was involved in his department's successful effort to obtain Fox News reporter James Rosen's personal emails -- the DOJ sought access to the documents by arguing Rosen was a likely criminal "co-conspirator" in a leak case.

Holder was facing a close-of-business deadline Wednesday to personally explain the possible disconnect. Earlier in the week, the department sent a written response penned by a lower-level official which committee Republicans said did not suffice.

Holder then submitted a written response of his own Wednesday night, after the deadline. According to a copy obtained by Fox News, Holder reiterated that he's started a review of policies pertaining to probes that involve reporters. And he vouched for the response sent out earlier in the week from the department's "Office of Legislative Affairs." He said that response "was not intended to demonstrate disrespect in any way."

But Chairman Bob Goodlatte, R-Va., and others said that did not constitute "a satisfactory on-the-record response."

It's unclear whether lawmakers would resort to a subpoena -- as some Republicans have threatened -- if Holder does not agree to return to explain himself.

Holder did testify Thursday before a Senate committee. There, he assured lawmakers that the department's goal in leak cases is "to identify and prosecute government officials who jeopardize national security by violating their oaths, not to target members of the press or discourage them from carrying out their vital work."

He said the DOJ "has not prosecuted, and as long as I have the privilege of serving as the Attorney General for the United States, I will not prosecute any reporter for doing his or her job."

The department has maintained that Holder's May 15 testimony was accurate because the department did not actually prosecute any reporter.