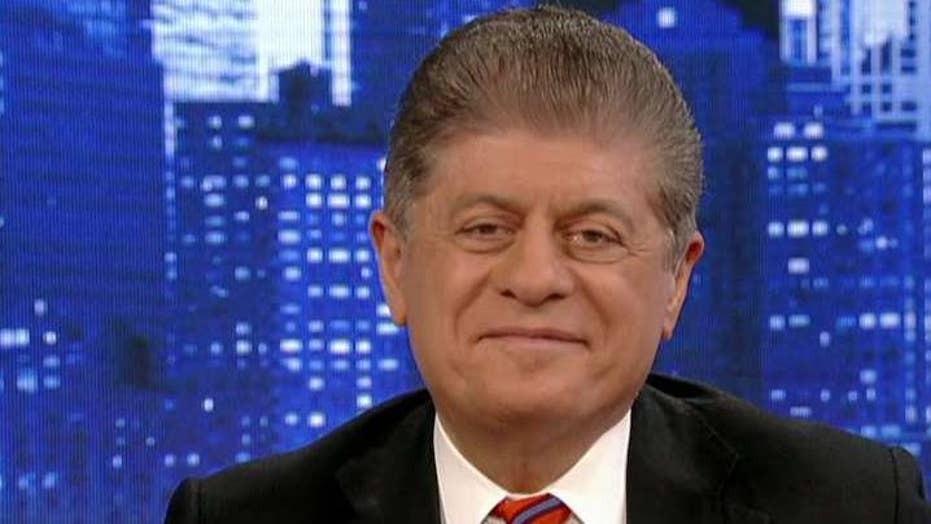 Judge Napolitano: Rudy Giuliani is the president's champion, willing to sacrifice his own image

Fox News senior judicial analyst Judge Andrew Napolitano says the president's lawyer may be slowly dripping information to the public to lessen the shock of the Mueller report.

Rudy Giuliani, President Trump’s personal attorney who has been under fire for what was seen by some as missteps during recent TV interviews, may be dripping information about Trump to the public to lessen the shock when Special Counsel Robert Mueller releases his final report on his Russian collusion investigation, Andrew Napolitano, Fox News’ senior judicial analyst said.

Napolitano, who appeared on “The Story with Martha MacCallum” on Tuesday, argued that the strategy is not an uncommon tactic and could lessen the impact of a report that could otherwise be "like dropping an anvil in a lake."

"There’s an old rule of thumb that trial lawyers follow: If there's damaging information about your client, better it come out of your mouth than out of the government’s mouth," he said. He said it's likely that Giuliani has a good idea about what Mueller may have on the president, and if he could slowly release the information, it will be "more palatable."

GIULIANI SAYS HIS TEAM COMMUNICATED WITH MUELLER'S TEAM ON BUZZFEED NEWS ARTICLE, AGREED MUCH OF IT FALSE

There have been reports that Trump is unhappy with Giuliani's recent interviews, one that included an appearance on NBC's "Meet the Press" where he said Trump had conversations with his former lawyer Michael Cohen about a potential Trump Tower in Moscow that could have spanned "throughout 2016."

Giuliani walked back those comments and said they were "hypothetical."

It was not Giuliani's first misstep. A White House aide told Politico that, "Handling Rudy’s f--- ups takes more than one man."

Giuliani, who is seen by many as a key public relations figure for Trump, talked about his role in a recent interview in the New Yorker.  The former New York City mayor, once known for managing the city after the 9/11 attacks, told the magazine that he thinks about his own legacy: “I am afraid it will be on my gravestone. 'Rudy Giuliani: He lied for Trump.'”