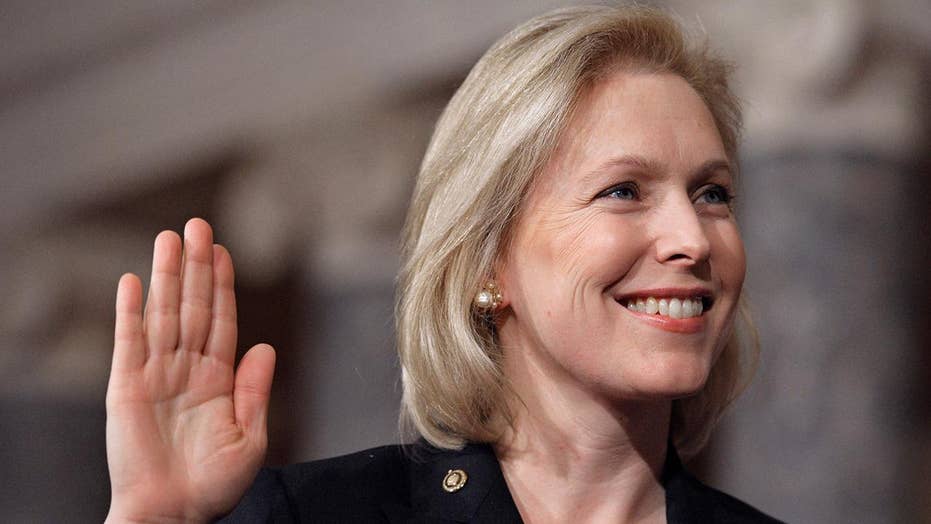 The Democratic senator says President Trump's tweet effectively accused her of being willing to trade sexual favors for cash; James Rosen has the details for 'Special Report.'

Sen. Kirsten Gillibrand of New York is one of the most talked-about potential Democratic candidates for the White House in 2020. But she has also turned into a thorn in the side of the Department of Justice as she holds up one of DOJ's highest-profile postings.

The junior senator from New York plans to use her “blue-slip prerogative” to block the confirmation of Geoffrey S. Berman, if he is nominated by President Trump to be the United States attorney for the Southern District of New York, Gillibrand spokesman Glen Caplin told Fox News.

Berman, 58, a former prosecutor in the office, has been appointed by Attorney General Jeff Sessions as the interim U.S. attorney for the Southern District of New York. The posting has jurisdiction over all businesses in Manhattan, including those of Trump and his family.

Gillibrand doesn't have an issue with Berman’s qualifications. Her objection lies with the man who nominated him and reports that Berman personally met with the president as part of the selection process.

“This is about President Trump,” Caplin said. "Senator Gillibrand believes U.S. attorneys work for the people they serve and must be independent from the White House.”

He called it a “cornerstone of our democracy” and said reports that Trump took the “unusual step of personally interviewing Berman are deeply disturbing, considering the conflicts of interest inherent by his potential jurisdiction on matters that could affect the president personally."

Caplin said that if the meeting between Trump and Berman occurred, as purported, it should be disqualifying.

“Under these circumstances, if nominated, the senator would have no choice but to stand up for the independence of the U.S. attorney's office by using her blue-slip prerogative,” Caplin said.

The Senate Judiciary Committee has long adhered to a so-called blue-slip process, in which "home-state" senators can attempt to block a president's preferred choice for federal office in their state.

Committee Chairman Chuck Grassley, R-Iowa, has made it clear that he intends to honor the “blue-slip courtesy.”

"It is difficult to envision a scenario in which Chairman Grassley would disregard an unreturned or negative blue slip on a U.S. attorney nominee,” Grassley spokesman Taylor Foy said.

The blue-slip courtesy was created in 1917 by the committee chairman at that time, Charles Culberson, D-Texas. It gives home-state senators the ability to consult with the White House when it comes to the nomination of circuit and district court judges, U.S. attorneys and federal marshals.

A source close to the committee told Fox News: "This hasn't really been much of a thing recently. Home-state senators usually negotiate with the White House. I don't recall encountering a blue-slip dispute for U.S. attorney nominees in the past."

Fox News has learned that Justice officials have offered Gillibrand a chance to meet with Berman.

“It’s very disappointing to hear the senator’s remarks,” one Justice Department official told Fox News. “We certainly hope that she will reconsider the offer we made to the senator in September to set up an in-person meeting with Mr. Berman where she could raise any concerns she may have.”

When asked about the offer to meet with Berman, a source close to Gillibrand would not comment on whether she’d be open to it in the future but reiterated, “Regarding meeting with Berman, this is about President Trump, not Mr. Berman personally."

One Trump administration official told Fox News, "This isn't about principle, this is about 2020."

Gillibrand is widely believed to be a top Democratic contender for a possible 2020 run for the presidency. While neither Gillibrand nor her aides would confirm or deny plans for a White House bid, there are reports of extensive fundraising as well as her outreach to young people and communities of color that play well with one of the most serious anti-Trump voting records in the Senate.

Trump officials have been quick to call out Gillibrand as hypocritical and point to a meeting former U.S. Attorney Preet Bharara had with Trump.

“It’s notable that Senator Gillibrand did not put out a statement condemning Preet Bharara when he met with President Trump shortly after the election about staying on as United States attorney," said one administration official.

In fact, Senator Schumer had a positive response to that meeting.

“President-elect Trump called me last week and asked me what I thought about Preet Bharara continuing his role as U.S. attorney. I told him I thought Preet was great, and I would be all for keeping him on the job and fully support it,” Schumer told the New York Post.

Caplin referred to the Bharaha meeting as "a red herring.”

He said: “Mr. Bharara met with President-elect Trump before he was president and the president displayed an inability to keep an appropriate arms-length relationship with law enforcement. In fact, Mr. Bharara was fired less than 24 hours after following protocol and declining to return the sitting president’s phone call. Mr. Bharara’s statement that he believed President Trump would ultimately ask him ‘to do something inappropriate’ is further cause for real concern."

The question for many becomes whether a sitting president, or a president-elect, should be meeting with a prospective U.S. attorney. The opinions differ.

Gillibrand thinks such a meeting is unethical.

William Barr, the attorney general from 1991-93 under George H. W. Bush, told Fox News, "It is not surprising at all that a president would take a moment to meet a candidate for a major DOJ post, including key U.S. attorney positions, before nominating."

Barr went on to say: "This is no cause for concern. Based on my own experience in Bush 41's administration, this is not unusual and makes sense where the president is not personally familiar with the candidate. Unless something inappropriate was discussed, the nominee should be judged on his or her merits and qualifications."

Department of Justice officials point out that Trump also met Jessie Liu, the new U.S. attorney for Washington, D.C., who was confirmed by the Senate in September.

Trump also has business dealings in Washington, specifically the Trump International Hotel downtown. D.C., however, has no home-state senators to block the president's appointments.