Tucker Carlson sends a message to Georgia Republicans thinking of sitting out the Jan. 5 runoffs

Georgia Senate Democratic candidates Jon Ossoff and Raphael Warnock -- both locked in tight runoff races that have drawn national attention -- have taken different stances on the question of court packing.

Ossoff is challenging Republican Sen. David Perdue, while Warnock is pitted against the state's other GOP senator, Kelly Loeffler. If Democrats pick up both seats, they will take control of the upper chamber, with Vice President-elect Kamala Harris casting tie-breaking votes.

One of the important issues that could rest on the races is whether the Supreme Court could be expanded from nine justices. It’s a fringe idea that has gained momentum in recent years, especially so since President Trump nominated Amy Coney Barrett to fill Ruth Bader Ginsburg's seat. Barrett was confirmed while early voting was going on, enraging Democrats.

"Packing” the court with extra justices was attempted unsuccessfully by President Franklin Delano Roosevelt in 1937, who sought to force through parts of his New Deal that were ruled unconstitutional by the high court.

Democrats have accused Republicans of stealing Supreme Court seats, and alleged that they have engaged in their own version of “court packing.” Consequently, a number of Democrats and activists have called for President-elect Joe Biden to attempt to pack the court with more justices.

Ossoff has opposed such a move.

“We shouldn’t expand the Supreme Court just because a justice may be confirmed with whom we disagree on policy,” he said in a September interview with Classic City News. 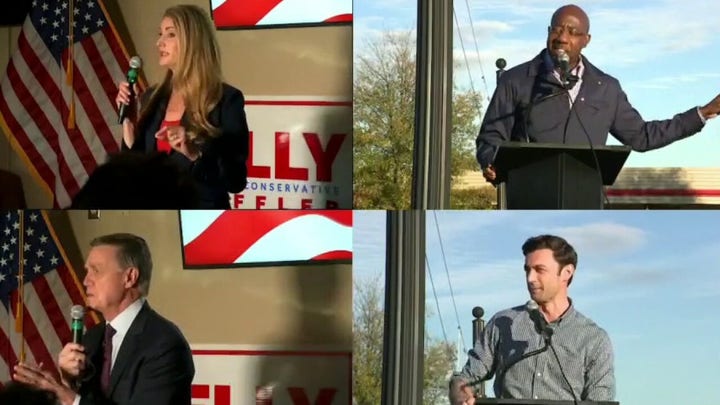 Perdue’s campaign has been pushing Ossoff to go a step further and support a constitutional amendment limiting the number of justices to nine. So far Ossoff has not expressed support for such a proposal.

While Warnock has not supported court-packing, he has also not explicitly opposed it -- instead claiming it would be “presumptuous” for him to weigh in on the matter.

"I think it’s presumptuous for me to go further down that path -- talking about what ought to happen with the courts," Warnock said earlier this month. "I’m hopeful that the people of Georgia will look at my life, look at my record and give me the great honor of representing them in the United States Senate."

The opposition of even a small number of Democrats would kill any chance of getting a court-packing measure through Congress.

In addition to Ossoff, Sens. Kyrsten Sinema, D-Ariz., and Joe Manchin, D-W.Va., have voiced opposition to adding justices to the court.

After repeatedly dodging questions on whether he supports court-packing, then-candidate Biden in October said he would form a commission to examine "how to reform the court system."

"If elected, what I will do is I'll put together a national commission, a bipartisan commission of scholars, constitutional scholars, Democrats, Republicans, liberals, conservatives," he said in an interview. "I will ask them to, over 180 days, come back to me with recommendations as to how to reform the court system, because it's getting out of whack."