The Duke of Edinburgh Prince Philip, husband of Britain's Queen Elizabeth, has passed away.

Former President George W. Bush said the late Prince Philip "brought boundless strength and support" to Queen Elizabeth II, offering condolences to the Royal Family just after learning of the passing of the Duke of Edinburgh.

"Laura and I are saddened to learn of the passing of Prince Philip, the Duke of Edinburgh," Bush said in a statement Friday morning. "Throughout his long and remarkable life, he devoted himself to worthy causes and to others."

Bush said Prince Philip "represented the United Kingdom with dignity and brought boundless strength and support to the sovereign."

"Laura and I are fortunate to have enjoyed the charm and wit of his company, and we know how much he will be missed," the former president continued.

"We join those around the world offering heartfelt condolences to Her Majesty Queen Elizabeth II and the entire Royal Family," he said.

Prince Philip passed away on Friday at Windsor Castle. He was 99.

The royal family confirmed the Duke of Edinburgh's death Friday in a statement.

"It is with deep sorrow that Her Majesty The Queen has announced the death of her beloved husband, His Royal Highness The Prince Philip, Duke of Edinburgh. His Royal Highness passed away peacefully this morning at Windsor Castle," the statement reads.

An announcement about Philip's death was placed on the gates of Buckingham Palace on Friday.

During England’s coronavirus lockdown, he had been staying at Windsor Castle, west of London, with the queen, 94.

On Feb. 16, Philip was admitted to a London hospital after feeling unwell. On March 3, he underwent a procedure for a pre-existing heart condition at St. Bartholomew’s Hospital before being transferred back to King Edward VII hospital on March 5 and ultimately released home on March 16. 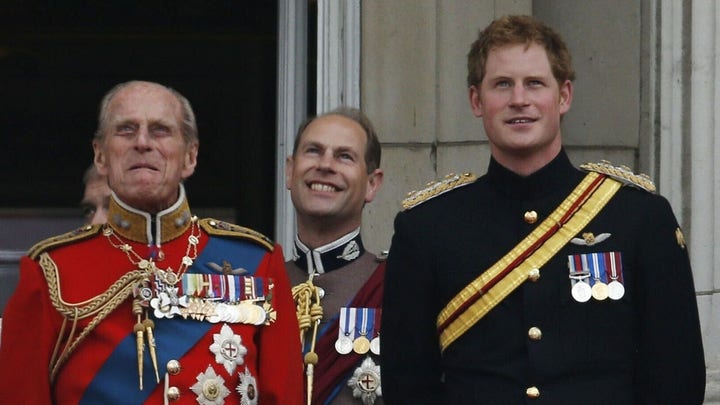 Philip married then-Princess Elizabeth in 1947 and is the longest-serving royal consort in British history. He and the queen have four children, eight grandchildren and nine great-grandchildren.

He was the second person ever to bear the title "Duke of Edinburgh," the first being his great-great-uncle, Prince Alfred Ernest Albert. His son, Prince Edward, will now assume the title.

Although he married into the British monarchy, royalty was in Philip's blood since birth. On June 10, 1921, he was born Prince Philip of Greece and Denmark – the only son of Prince Andrew of Greece and Princess Alice of Battenberg, as well as the great-great-grandson of Queen Victoria.

Philip's deep-seated royal roots placed him in the line of succession to the thrones of 16 countries.