Will the 2020 election come down to capitalism vs. socialism?

Democratic candidates are challenged with walking a fine line between pleasing liberal primary voters and appealing to the larger population in a general election.

The Democrats' 2020 presidential hopefuls are latching onto an array of far-left ideas at a quickening pace months before the primaries even start -- stirring hope from Republicans that the eagerness to endorse proposals with limited appeal beyond the hardcore base could turn off voters in the general election and hand President Trump a second term.

The trend started last year as potential 2020 hopefuls backed ideas like abolishing Immigration and Customs Enforcement (ICE) and "Medicare-for-all." But that was just the start. Candidates have lurched further left this year as they make their White House bids official, flirting with everything from slavery reparations to the destruction of existing border wall.

PENCE, AT CPAC, SLAMS DEMS OVER GREEN NEW DEAL: 'THAT SYSTEM IS SOCIALISM'

In recent weeks, Sens. Kamala Harris, D-Calif., and Elizabeth Warren, D-Mass., as well as former San Antonio Mayor Julian Castro have come out in favor of reparations for black Americans. The proposals have not been detailed, and it’s not clear if that would translate to cash payments. Harris suggested to The Grio that this could include a generic tax credit to families making under $100,000. Warren was prepared to go a step further, though, and told reporters in Manchester, N.H., last week that reparations for Native Americans should be “part of the conversation” as well.

Experts told The New York Times that such a program could cost several trillion dollars. Further, reparations are not widely popular. A 2016 Marist poll found that 68 percent of Americans were against reparations for slavery.

Meanwhile, the Green New Deal -- a massive overhaul of the nation’s economy and energy strategy estimated to cost well into the tens of trillions of dollars -- has taken hold with both the House and the 2020 field. The nonbinding resolution, co-sponsored by nearly all major 2020 Democrats, was introduced in the House last month.

The rollout itself caused headaches for Democrats, as it included FAQs from Rep. Alexandria Ocasio-Cortez, D-N.Y., containing promises of economic security for those “unwilling to work” and talk of abolishing air travel in favor of high-speed rail. The package quickly emerged as a policy foil for Republicans looking to cast the Democrats as out-of-touch, radical socialists.

“Under the guise of Medicare-for-all and a Green New Deal, Democrats are embracing the same tired economic theories that have impoverished nations and stifled the liberties of millions over the past century,” Vice President Pence said Friday in a speech to the Conservative Political Action Conference, where the Green New Deal was a constant punching bag. “That system is socialism.”

Democrats in leadership have also expressed concerns about the plan. Senate Minority Whip Dick Durbin, D-Ill., said his reaction after reading it was, “What in the heck is this?" House Speaker Nancy Pelosi, D-Calif., initially dismissed it as the "green dream or whatever they called it," though she has since praised the passion of those behind it.

Alabama Sen. Doug Jones, a moderate Democrat in a red state, told Politico: “What’s proposed in there is a little too aggressive and a little too far right now, but we have got to have a conversation about climate change and what we’re doing to this planet.”

Democrats also have doubled down on their plans for “Medicare-for-all,” a single-payer health care overhaul. Sens. Harris and Sanders have indicated that their “Medicare-for-all” plans would kill off private health care. And a bill introduced this week in the House explicitly bars private plans from duplicating the benefits under the government plan.

The National Republican Congressional Committee showed its delight at the proposal by tweeting out a gif of a fawn munching popcorn. “Keep goin,” it said.

In a lengthier statement, spokesman Michael McAdams said: "Good luck to the vulnerable House Democrats who will be forced to defend this $32 trillion boondoggle.”

At CPAC this week, speaker after speaker suggested these potential litmus tests would put the party at a disadvantage come November 2020.

“When it gets down to President Trump against whoever the left nominates, President Trump is going to clean their clock in my judgment. He’s going to win. Understand just how radical they are,” Rep. Jim Jordan, R-Ohio, told CPAC Thursday. 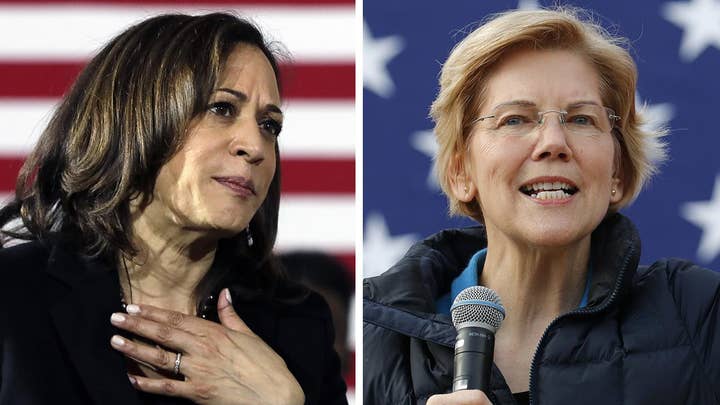 The Green New Deal represents only a fraction of the boundary-pushing ideas that have attracted the attention of the presidential field.

Possible presidential hopeful Beto O'Rourke went beyond opposing Trump's border wall by calling for existing wall to be torn down. During an interview last month, MSNBC host Chris Hayes asked O'Rourke: "If you could, would you take the wall down here -- knock it down?"

Sen. Kirsten Gillibrand, D-N.Y., offered limited support for such a move when asked about O'Rourke's plan: “I could look at it and see which part he means and why, and if it makes sense, I could support it."

Harris this week opened up a new issue when she said she wants to decriminalize sex work.

As the 2020 season moves into full swing, an undeniable factor in the party's left-ward tilt is Ocasio-Cortez, who continues to play an outsize role on Capitol Hill and beyond. She recently helped torpedo a deal that would have seen Amazon bring a major campus to New York -- bringing the ire of Gov. Andrew Cuomo. Last week, Ocasio-Cortez stirred controversy again when she questioned whether young people should be having children considering the threat of climate change.

While Ocasio-Cortez is not running for the White House, she appears to be playing a role enforcing party unity on key issues -- which could cause trouble for moderates in purple states going into 2020. Ocasio-Cortez warned this week that Democrats who side with Republicans on the floor could be put "on a list" for possible primary challenges down the line. In January she appeared in a video lending her support to a movement that seeks to oust incumbent Democrats in favor of liberal replacements.

The developments prompted Washington Post columnist Richard Cohen to warn this week that Democrats need a candidate “who can occupy the media’s idle hours in Iowa and remind America that the party is not in the least Trotskyite” and that anyone else could be handing victory to Trump.

Cohen called Trump “rotten” and said he “needs to be replaced” but warned that socialism and reparations are “anathema to the electorate.”

“They ought to come boxed and nicely wrapped for what they really are -- not a gift to the economically anxious or the racially aggrieved, but to Donald Trump,” he wrote.