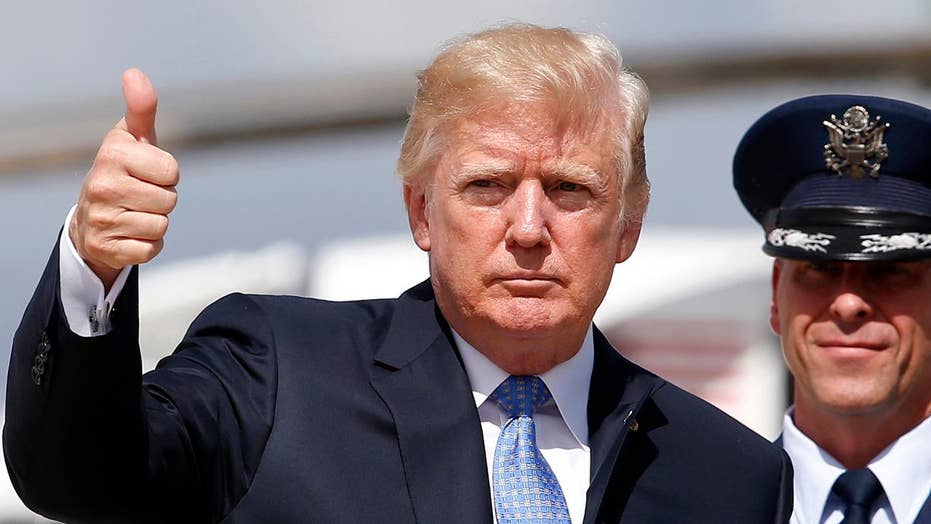 Trump eyes early 2018 for another shot at ObamaCare rep

President tells reporters that the votes are there; Kevin Corke reports from Indianapolis

Taxes and health care. Both are top priorities in Washington -- and both are issues where voters give President Trump some of his worst job ratings. Even so, if Republicans fail to fulfill their promise of replacing ObamaCare, few would blame the president.

Overall, 42 percent of voters approve of the job Trump is doing as president, while 53 percent disapprove. Last month, it was 41-55 percent. His highest approval was 48 percent in February, soon after taking office (47 percent disapproved).

Unlike his boss, Vice President Mike Pence gets a positive score: 44 percent approve vs. 40 percent disapprove. About one-in-seven, 15 percent, is unable to rate Pence.

Some 83 percent of Republicans approve of Trump and 80 percent approve of Pence.

Among all voters, more "strongly" disapprove of Trump (45 percent) than "strongly" approve (26 percent). That 19-point intensity gap is mostly unchanged since May. Plus, Trump’s job rating is steady for the third month in a row.

If his ratings do change, however, expect downward movement. Here’s why: the poll asks voters if there is a chance Trump could say or do something that would change their mind about him. Half of Trump approvers (50 percent) think he could do something to make them disapprove, yet only one-third of disapprovers feel they might shift to approval (34 percent).

On the issues, Trump’s response to recent hurricanes brings his most positive job ratings, by far. Sixty percent approve, while 31 percent disapprove.

"Even though many have already made up their minds about Trump, performance and conditions matter," says Republican pollster Daron Shaw, who conducts the Fox News poll with Democratic counterpart Chris Anderson.  "His handling of the hurricanes has been a net positive for him, but that could turn if the situation in Puerto Rico continues to deteriorate."

A highlight for Trump is the economy, as more voters approve (49 percent) than disapprove of the job he’s doing (43 percent). That’s a net positive score, and his best job rating outside of hurricane response.

In addition, twice as many say the administration has made the economy better (33 percent) rather than worse (14 percent). Although many, 49 percent, feel it hasn’t made a difference either way. Yet securing the nation from terrorism is an area where confidence in Trump is lower. In fact, more think he has made the country less safe from terrorism (37 percent) than safer (28 percent). One-third says no difference (33 percent).

The president unveiled his tax reform plan in Indianapolis Wednesday.

Voters should be open to it, as almost all agree the tax system needs work: 51 percent say it needs "some" changes, while another 38 percent feel it will take "a complete overhaul."

"The lines are clear on tax reform," says Anderson.  "Congress could satisfy Democrats and Republicans alike by lowering taxes on the middle class and small business. Or it could push for tax cuts for corporations and the wealthy and spark another sharply partisan battle."

Voters oppose reducing the deductions taxpayers can claim by 48-41 percent.

For the first time, a majority of voters are glad the 2010 health care law passed, and the 51 percent who feel that way is a record high. The 42 percent who wish ObamaCare had never passed is a new low, down from the previous low of 48 percent last year.

While most Republicans (74 percent) wish it had not passed, some 20 percent are glad it did. That’s up from 12 percent a year ago. The number of Democrats glad the law passed stands at 81 percent, up from 75 percent in 2016. Among independents, 40 percent are glad, while 47 percent wish the 2009 system were still in place.

The most recent Republican attempt to replace the Affordable Care Act was pulled from Senate consideration Tuesday when it was clear it lacked the votes to pass.

For seven years Republicans promised to repeal Obamacare, and Donald Trump campaigned on it too. So if they fail to fulfill their promise, who is to blame? Among Trump voters, 77 percent would blame Senate Republicans, while just 5 percent blame the president. Among all voters, 56 percent say lawmakers vs. 18 percent Trump.

In February 2009, as then-President Obama was calling for health care reform, a high of 66 percent said providing health care was Uncle Sam’s job. Now 52 percent feel it is the responsibility of the federal government to ensure all Americans have health care.

Check out these gaps: 83 percent of Democrats feel it is the government’s responsibility, compared to 41 percent of independents and 21 percent of Republicans. Women (58 percent) are also more likely than men (46 percent) to feel that way.

Trump has lost ground on character: the number of voters who feel he has the temperament to serve effectively as president is down seven points (from 44 percent in December to 37 percent now). The shift comes largely from a 10-point drop among Republicans: 83 percent said he had the right temperament in December. That’s 73 percent now.