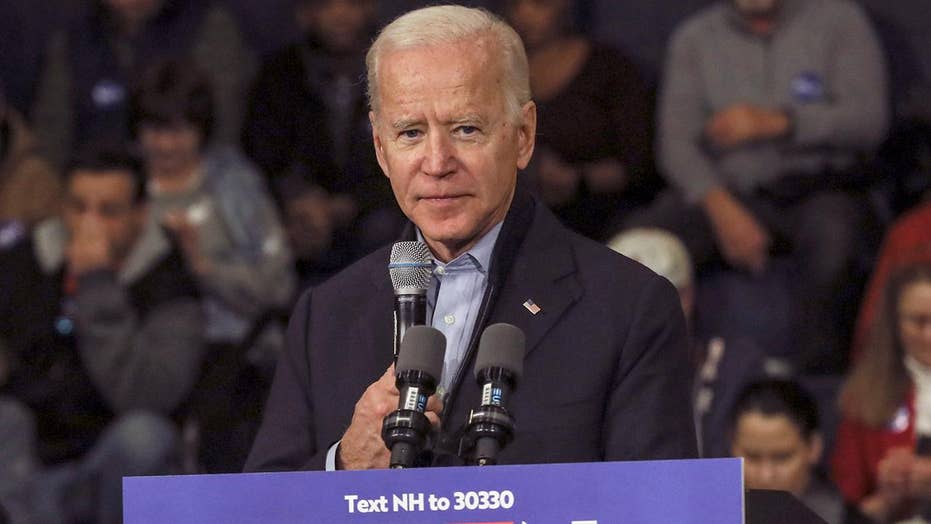 Former Vice President Joe Biden remains Democratic primary voters’ preferred presidential candidate, as a Fox News Poll released Sunday shows more think he is capable of beating President Trump than feel that way about any of his main competitors -- and he performs best in potential 2020 matchups. In addition, Biden has the largest number of Democrats, as well as voters overall, saying his positions on the issues are “about right.”

Running down the Democratic race: Biden leads with 30 percent, followed by Sanders at 20 percent. Warren returns to third with 13 percent, down from a high of 22 percent in October.

But don’t place any bets just yet. Nearly half of those currently backing a candidate, 49 percent, say they could change their mind.

"Biden's support has been the consistent feature of this race," says Republican pollster Daron Shaw, who conducts the Fox News Poll with Democrat Chris Anderson. "It's time for consultants and pundits to seriously consider the possibility his backers aren’t simply being strategic and may be more committed than we heretofore suspected."

Sanders and Warren have experienced fairly significant swings in support, while Biden’s numbers have barely budged since March, staying between 29-35 percent. At the same time, his current 10-point edge over Sanders is down from a 19-point lead in June.

Fewer Democratic primary voters are satisfied with their field of candidates now (63 percent) than were in late October (69 percent). Since then, Bloomberg and Deval Patrick joined the race, while Steve Bullock, Kamala Harris and Joe Sestak dropped out.

Since late October, support for Warren is down across the board, with the notable declines among those with a college degree (-13 points), those ages 45+ (-12), and women (-11 points).

“The most likely explanation for Warren’s drop is some primary voters souring on 'Medicare-for-all',” says Anderson.  “The issue could be a real drag for the Democratic nominee in the general election. The more it’s debated, the more voters who care most about beating Trump seem to realize her push for 'Medicare -for-all' is bad politics at this moment in time.”

Currently, 54 percent of Democratic primary voters favor moving to a government-run system in lieu of private health insurance, down from a high of 65 percent in October. Large numbers like the idea of allowing every American to buy into Medicare if they want (78 percent) and making minor changes to Obamacare (67 percent).

Among all voters, majorities favor "Medicare-for-all" who want it (66 percent) and Obamacare (53 percent).  Over half (53 percent) oppose an entirely government-run health care system. In addition, 68 percent favor Warren’s proposed 2 percent “wealth tax,” including 83 percent of Democrats and 51 percent of Republicans.

In hypothetical head-to-heads, Biden tops Trump by 48-41 percent and has the only lead outside the poll’s margin of sampling error.

However, Biden’s 7-point lead is his narrowest since March; this is the first time he’s been below 50 percent since July, and Trump’s 41 percent support is a record high for him in a ballot test against the former vice president.

Biden’s advantage over Trump is driven largely by double-digit leads among women (+15 points) and non-whites (+36).  Whites with a college degree go for Biden by 6 points, while whites without a degree back Trump by 12. Rural whites prefer Trump over Biden by 18 points, while suburban women favor Biden by 21.

Conducted December 8-11, 2019, under the joint direction of Beacon Research (D) and Shaw & Company (R), this Fox News Poll includes interviews with 1,000 randomly chosen registered voters nationwide who spoke with live interviewers on both landlines and cellphones. The poll has a margin of sampling error of plus or minus 3 percentage points for all registered voters and 4.5 points for Democratic primary voters (453).