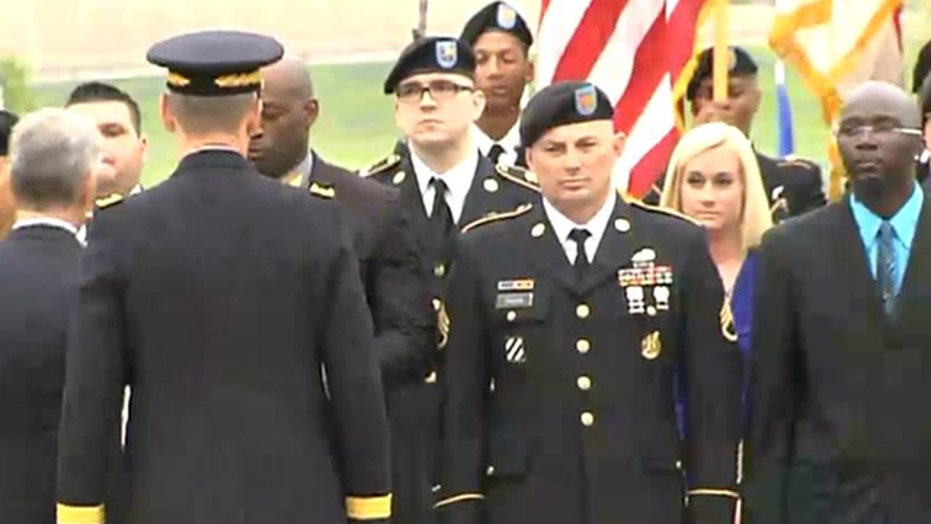 WASHINGTON – Victims of the 2009 Fort Hood terror attack finally received their long-delayed honor on Friday at a Purple Heart ceremony in Texas -- though they may have to keep fighting to get military benefits.

Nearly 50 survivors lined up at the ceremony held at Fort Hood on Friday, and all were given either a Purple Heart or Defense of Freedom medal for their injuries. The ceremony was years in the making, as the U.S. government initially described the attack as mere workplace violence, and not terrorism.

But the medal, while long-sought, may be symbolic.

At least one survivor told Fox News ahead of the ceremony that the Army has so far denied him any benefits, and his fellow servicemembers are likely in for a similar struggle.

"It sounds like there's going to be some more fighting ahead of us with the Army, at least in regards to benefits," retired Staff Sgt. Shawn Manning, who was shot six times by Maj. Nidal Hasan, told Fox News on Friday. He explained the Army is not defining the injuries as combat-related.

“I think it’s almost unheard of for someone to receive the Purple Heart but not have their injuries classified as combat-related,” Manning said.

Manning said “the fact that you have an Al Qaeda-inspired terrorist attack that we were shot in and that’s not combat related, I think is just ridiculous.” Fox News reported Thursday that Manning was being denied benefits.

In February, the Army, under heavy political pressure by Texas lawmakers, cleared the way for the military and civilian distinctions after the shooting was declared an act of international terrorism and not workplace violence.

Sen. Ted Cruz, R-Texas, speaking with Fox News, said Friday that while the ceremony was "a long time coming," it is "outrageous" and "indefensible" that Manning is being denied benefits.

"I intend to reach out to the secretary of defense personally -- enough games," Cruz said. "We need to acknowledge the heroism of these soldiers."

The Purple Heart medals are typically awarded for wounds and acts of bravery in a war zone although it can be authorized in other situations including international terrorist attacks against the United States. The Defense of Freedom medal is the civilian equivalent to the Purple Heart.

Thirteen people were killed and more than 30 others wounded in the Nov. 5, 2009 attack by Hasan.

Hasan, an Army psychiatrist, was convicted in 2013 of 13 counts of premeditated murder and 32 counts of attempted murder. He was sentenced to death.

Following the attack, the lack of recognition for those killed and wounded during Hasan’s rampage angered some of the victims and their families. The Army’s initial refusal to call the Fort Hood attack international terrorism led Congress to include a provision in the 2015 National Defense Authorization Act that required the Department of Defense to review the Fort Hood case for Purple Heart recipients.

In his case, Manning had submitted new paperwork so the Army would recognize his injuries were sustained in the line of duty. But his appeal was rejected by a physical evaluation board, apparently based on a narrow interpretation of the law.

"Section 571 of the 2015 National Defense Authorization Act addresses both the awarding of the Purple Heart to service members killed or wounded in attacks inspired or motivated by foreign terrorist organizations and the Defense of Freedom Medal for those members and civilians killed or wounded during the Fort Hood attack on 5 November 20009," the April 6 letter states.

"Nowhere in the act, however, does it offer combat benefits for service members permanently disabled in attacks inspired or motivated by foreign terrorist organizations. Although subsequent legislation and guidance may change, currently, the Board has no authority to award V1/V3 (service related) designation to soldiers disabled during the Fort Hood attack. "

Manning said the board's decision means, on a practical level, his family will lose back pay, and $800 a month in benefits, adding he believes other Fort Hood survivors will face the same treatment.

Army spokeswoman Cynthia O. Smith told Fox News in a statement, "All recipients of the Purple Heart Medal under section 571 of the NDAA 2015 will receive the benefits to which they are legally entitled.In the case at issue, no final decision has been rendered, and the Soldier will have a full opportunity to present evidence at a formal hearing."

Based on the statement, Fox News followed up to ask if it is the Army's intention that the Fort Hood Purple Heart recipients would need to go to a formal hearing, as is the case with Manning, to prove their injuries are combat-related. There was no further comment from the Army.