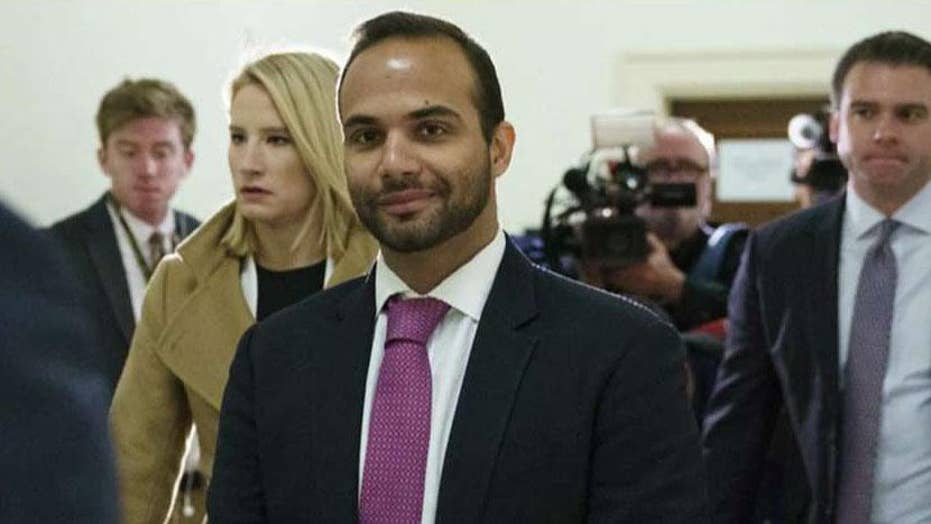 Does George Papadopoulos have any connection to Russia?

Former 2016 Trump campaign aide George Papadopoulos walks Maria Bartiromo through the timeline of events that led up to why he was investigated during the Trump-Russia probe.

Former Australian diplomat Alexander Downer, in an extensive interview, spoke out on his mysterious role in triggering the launch of the Trump-Russia probe -- while seeming to push back on suggestions that his fateful 2016 meeting with then-Trump adviser George Papadopoulos was somehow a set-up.

In an interview with Sky News earlier this week, Downer discussed the meeting between himself and Papadopoulos in London in May 2016, where the young Trump aide had mentioned how Russia had dirt on Hillary Clinton. The diplomat later told the Americans, which reportedly helped prompt the FBI probe.

“All we did was report what Papadopoulos said, and that was that he thought the Russians may release information that could be damaging to Hillary Clinton’s campaign at some stage before the election,” Downer told Sky News. “Now, he didn’t have to tell me that. I didn’t go to the meeting thinking he was even going to mention Russia in a context like the election campaign, I had no idea he would say that.”

Papadopoulos had several meetings with foreign individuals overseas, including Downer and Maltese professor Joseph Mifsud, during the 2016 presidential election. Special Counsel Robert Mueller’s report stated that Mifsud told Papadopoulos that the Russians had “dirt” in the form of emails that could damage Clinton’s 2016 presidential campaign. Papadopoulos then told Downer about his conversations with Mifsud.

Papadopoulos has previously suggested that the Downer meeting was part of a plot to lay the groundwork for the Russia probe.

Downer said that Papadopoulos “chose” to share that information with him.

“I have no idea why he was blabbering this, but if you say that sort of thing to somebody who is part of the Five Eyes intelligence community, I mean, I would regard myself as a warrior for the western alliance, but if it is drawn to my attention that the Russians might be hacking into the campaigns of major candidates in western elections and then using that information to try to influence the outcome of those elections, that would really worry me,” he explained.

“Russia is not a friendly pal when it comes to western interests, and if they’re hacking into our elections, then that’s something we should try to stop,” Downer said. “I don’t know why he told me this, but he did and we reported it and the rest is history, but there is no defense for him saying it is some sort of weird conspiracy, I mean, it’s what he told me.”

Downer’s comments come just days after The New York Times reported that an investigator working for the U.S. intelligence community posed as a Cambridge University research assistant in September 2016, and tried to probe Papadopoulos on the campaign’s possible ties to Russia.

The report cited individuals familiar with the Justice Department’s ongoing inspector general review of surveillance and other actions related to the probe in 2016. Attorney General Bill Barr received harsh backlash for suggesting that “spying did occur” on the Trump campaign, while announcing he would review alleged misconduct surrounding the origins of the Russia investigation.

The investigator, who went by Azra Turk, met with Papadopoulos at a London bar, where she asked directly whether the Trump campaign was working with Russia.

Papadopoulos told Fox News that he saw Turk three times in London: once over drinks, another time over dinner, and then once with Stefan Halper, the Cambridge professor who has been a longtime FBI informant. The Times noted that Turk had apparently been sent to oversee Halper, and possibly to provide cover for Halper in the event Turk needed to testify.

Papadopoulos told Fox News last week that he “immediately thought she was an agent, but a Turkish agent, or working with the CIA,” and explained “that’s why I never accepted her overtures and met her again after London…London became a very bizarre hangout spot for me that year.”

Papadopoulos also told Fox News that Turk was trying to “seduce” him in an effort to “make me slip up and say something that they knew I had no info on.”

Papadopoulos later pleaded guilty to making false statements as part of Mueller’s investigation and served a short two-week prison sentence last year. The false statements were made in January 2017 to FBI agents concerning his contacts with Mifsud. Papadopoulos, in his guilty plea, acknowledged that Mifsud shared the information that Russia could have “dirt” on the Clinton campaign.

It has long been suggested – in court documents filed by Mueller’s team, by Democrats on Capitol Hill and in the media – that Mifsud was connected to Russian intelligence, though others insist that he more closely associated with Western governments and their intelligence agencies.

“Quite frankly, I don't think anybody is buying that this guy was some Russian intermediary or Russian spy trying to collude with me," Papadopoulos told Fox News. "Quite frankly, even people like Rudy Giuliani are going public and stating that he was probably part of some sort of setup."

Mueller's report specifically noted that Papadopoulos was investigated as a potential foreign agent of Israel. “While the investigation revealed significant ties between Papadopoulos and Israel (and search warrants were obtained in part on that basis), the Office ultimately determined that the evidence was not sufficient to obtain and sustain a conviction,” Mueller's team wrote.

“I was actually really impressed and quite frankly shocked that Bob Mueller told the truth about why I was illicitly targeted and it really had nothing to do with Russia," Papadopoulos told Fox News. "It had to do with my ties to Israel."

Fox News' Gregg Re, Alex Pappas, and Kristin Brown contributed to this report.