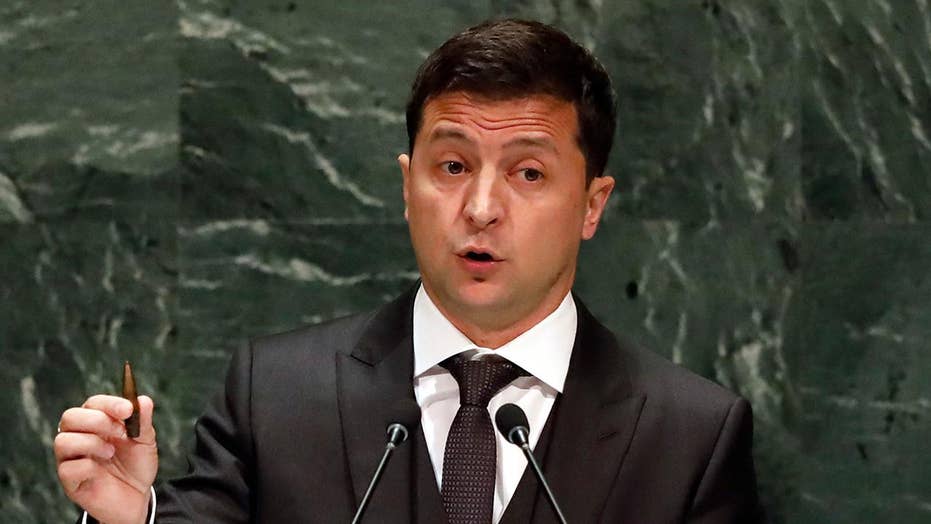 Former U.S. envoy for Ukraine Kurt Volker appeared on Capitol Hill Thursday as one of the first witnesses to go before a congressional body amid the impeachment probe triggered by the whistleblower complaint on President Trump’s July 25 phone call with Ukrainian President Volodymyr Zelensky.

Volker is participating in a closed-door transcribed interview with members of the House Intelligence, Oversight and Foreign Affairs committees after the complaint mentioned him as having allegedly played a role in Trump lawyer Rudy Giuliani’s investigations connected to Ukraine. Volker resigned soon after the complaint was made public last week.

Talking to reporters outside the hearing, Ohio Rep. Jim Jordan, the top Republican on the House Oversight Committee, praised Volker as "unbelievably knowledgeable about what was going on in Ukraine" and called him a "true professional in our diplomatic corps."

"But not one thing he said comports with any of the Democrats' impeachment narrative," he added. "Not one thing.”

House Intelligence Committee Chairman Rep. Adam Schiff, D-Calif., told reporters Thursday afternoon that he would not yet comment on Volker's testimony, but offered some words of criticism for Trump. Schiff claimed that by "suggesting, urging a foreign country to interfere in our presidential election," Trump showed that after two years of Robert Mueller's Russia investigation, "he feels he can do anything with impunity."

Meanwhile, new encrypted text messages obtained by Fox News show Volker and other U.S. officials battling internally last month over whether Trump was engaged in a "quid pro quo" with Ukraine as he pressed for the country to look into the Biden family, while holding back U.S. aid. The texts with Volker, U.S. Ambassador to the EU Gordon Sondland and Chargé d’Affaires of the U.S. Embassy in Ukraine Bill Taylor indicate that the nature of a potential arrangement between the U.S. and Ukraine was a matter of dispute.

"As I said on the phone, I think it's crazy to withhold security assistance for help with a political campaign," Taylor said in a text exchange.

Sondland responded by saying that was not what was happening. "Bill, I believe you are incorrect about President Trump's intentions. The President has been crystal clear: no quid pro quo's of any kind. The President is trying to evaluate whether Ukraine is truly going to adopt the transparency and reforms that President Zelensky promised during his campaign."

Both men then agreed to cease discussing the matter over text, noting that phone calls with the appropriate officials would be preferable.

Democrats are accusing Trump of threatening to withhold military aid as leverage to obtain Ukraine's assistance in an investigation into the Biden family. Trump adamantly denies any quid pro quo.

A White House memo released last week contains the substance of the July phone call showing that Trump asked Zelensky to assist Rudy Giuliani, who was investigating former Vice President Joe Biden and his son, Hunter. In particular, Giuliani has raised questions about Hunter Biden’s business dealings with Ukrainian energy company Burisma Holdings, as well as the former vice president's successful effort to have a prosecutor -- who had been looking into the company -- fired. The Bidens have vehemently denied wrongdoing, with allies maintaining the intervention had to do with corruption concerns.

According to the whistleblower complaint, Volker met with Zelensky and other Ukrainian officials in Kiev the day after the phone call. The complaint alleges that, according to “various U.S. officials,” Volker and Sondland advised Ukraine how to “navigate” Trump’s request.

The State Department said Volker has confirmed that he put a Zelensky adviser in contact with Giuliani, at the Ukraine adviser's request, and Giuliani has said he was in frequent contact with Volker.

Other text messages between Volker and Giuliani provided to Fox News showed that the two had been in touch since at least May 2019, with a June 19 text message from Volker discussing connecting Giuliani with top Zelensky adviser Andrey Yermak. Giuliani and Yermak went on to meet in Madrid on Aug. 2. The text messages also showed that Volker followed up with Giuliani after Trump and Zelensky's call.

Both Trump and Zelensky have insisted that Trump did not pressure Zelensky into doing anything.

The Associated Press reported on Wednesday that Volker met last year with a top official from the same Ukrainian energy firm that paid Hunter Biden to serve on its board. The meeting occurred even as Giuliani pressed Ukraine's government to investigate the company and the Bidens' involvement with it.

Volker’s interview with the House Intelligence Committee is part of the Democrats’ ongoing impeachment-related investigation of Trump. House Republicans were up in arms when Schiff said that GOP members of the Foreign Affairs Committee would not be permitted to ask questions or have equal representation during the session.

Rep. Michael McCaul, R-Texas, the Foreign Affairs Committee’s ranking member, argued in a letter Wednesday that because the full House has not voted to approve an impeachment inquiry, only his committee has the authority to conduct an investigation of this nature.

“Intelligence Chairman Adam Schiff lacks the jurisdiction to investigate the Department of State’s conduct of United States foreign policy toward Ukraine. That prerogative belongs to our Members,” McCaul said in his letter to Foreign Affairs Committee Chairman Eliot Engel, D-N.Y.

Fox News learned Thursday that Democrats made concessions and that there is now equal representation from counsels for both parties at the session. Still, while representatives from the Intelligence, Foreign Affairs, and Oversight Committees are present, only the Intelligence Committee is permitted to ask questions.

“There was no contact between the legal team and Congress until nearly a month after the whistleblower complaint was submitted to the Intelligence Community’s Inspector General,” Zaid said.