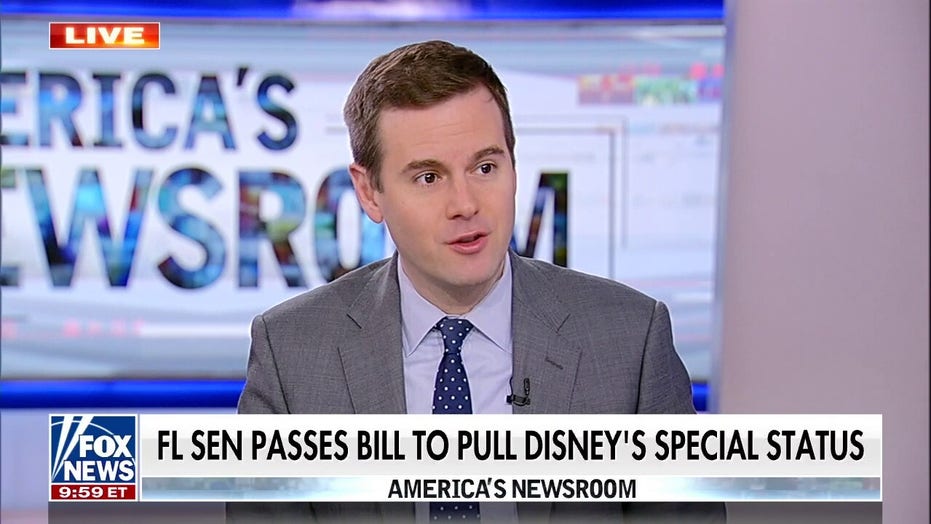 The Florida House of Representatives passed a bill on Thursday that would dissolve Walt Disney World’s special governing power in the state.

The move could have huge tax implications for Disney, whose series of theme parks have transformed Orlando into one of the world’s most popular tourist destinations, and serves to further sour the relationship between the Republican-led government and a major political player in the state.

Democratic lawmakers could be heard shouting in the background as they attempted to protest the bill as it was passed.

The bill will now head to the desk of Republican Gov. Ron DeSantis who has been involved in a war of words with the company after it publicly opposed a bill he signed which prohibits classroom instruction on "sexual orientation" and "gender identity" with children in third grade or younger "or in a manner that is not age-appropriate or developmentally appropriate for students in accordance with state standards."

The passage in the Florida House comes the day after the Florida Senate passed the measure by a vote of 23-16 to dissolve Disney's special status that it was granted by the state over 50 years ago.

The special status, known as The Reedy Creek Improvement Act, was signed into law in May 1967 by Gov. Claude Kirk in response to lobbying efforts by Disney. The entertainment giant proposed building a recreation-oriented development on 25,000 acres of property in a remote area of Central Florida's Orange and Osceola counties, which consisted of 38.5 square miles of largely uninhabited pasture and swampland.

Orange and Osceola County did not have the services or resources needed to bring the project to life, so the state legislature worked with Disney to establish the Reedy Creek Improvement District, a special taxing district that allows the company to act with the same authority and responsibility as a county government.

"What I would say as a matter of first principle is I don’t support special privileges in law just because a company is powerful and they’ve been able to wield a lot of power," DeSantis said during a press conference last month."I think what has happened is there’s a lot of these special privileges that are not justifiable, but because Disney had held so much sway, they were able to sustain a lot of special treatment over the years."

Disney released a statement shortly after DeSantis signed the parental rights bill vowing to help fight the law in court.

"Florida’s HB 1557, also known as the ‘Don’t Say Gay’ bill, should never have passed and should never have been signed into law," Disney said. "Our goal as a company is for this law to be repealed by the legislature or struck down in the courts, and we remain committed to supporting the national and state organizations working to achieve that. We are dedicated to standing up for the rights and safety of LGBTQ+ members of the Disney family, as well as the LGBTQ+ community in Florida and across the country."

DeSantis has pushed back against the company multiple times and pledged to oppose the "wokeness" he says the company is promoting.

"Look, there’s policy disputes, and that’s fine," DeSantis said earlier this month, "but when you're trying to impose a woke ideology on our state, we view that as a significant threat."

"This wokeness will destroy this country if we let it run unabated," DeSantis added. "So in Florida, we take a very big stand against that."