Florida Attorney General Ashley Moody is sounding the alarm on the fentanyl surge at the U.S. southwest border, demanding President Biden and congressional leadership take "immediate and forceful action to regain control" of the border.

Moody wrote that there "has been an unprecedented increase in the amount of fentanyl coming into the United States, with disastrous consequences for the States and our citizens."

The U.S. Drug Enforcement Administration is seeing a record number of seizures of fentanyl.  (DEA)

"As we recognize the President’s first year in office, we cannot ignore the fact that the escalating crisis at the border is having a devastating effect on our efforts to end the national opioid epidemic and save lives," she wrote, adding that the amount of illicit fentanyl seized at the southwest border has "increased more than 50 percent when compared to the same time period in 2020."

"In plain numbers, that translates to 8,774 pounds of fentanyl seized, compared to 5,734 pounds seized from February through November 2020," Moody wrote. "In fact, the amount of fentanyl confiscated during that 10-month period, is enough to kill the entire population of America six times over."

Moody said that law enforcement officials know "from hard experience" that what is seized is "inevitably just the tip of the iceberg." 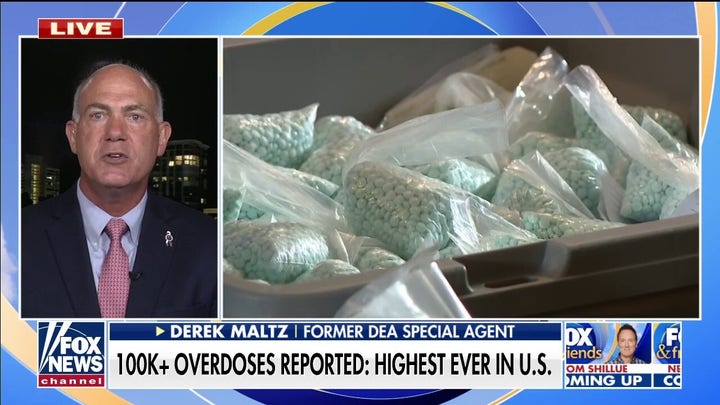 "This tidal wave of lethal drugs can only have devastating effects on our citizens," Moody wrote, citing news reports that fentanyl overdoses have become the "number one cause of death for adults ages 18 to 45, surpassing deaths by COVID-19, cancer and car accidents."

"It is a direct consequence of the mayhem that now exists on our southwest border, with hundreds of thousands of immigrants crossing out border—and U.S. Customs and Border Protection recorded more than 1.85 million migrant encounters from January to November 2021, according to the agency’s own website," she wrote, saying it represents "the highest number of illegal crossings recorded since at least 1960."

FENTANYL OVERDOSES BECOME NO.1 CAUSE OF DEATH AMONG US ADULTS, AGE 18-45: ‘A NATIONAL EMERGENCY’

Moody warned that the "atmosphere of chaos" on the border gives "free rein to some of the worst actors in the criminal world," including Mexican drug cartels, to "smuggle drugs in enormous quantities."

"And we know that with drug smuggling, there is also the smuggling of people. Including thousands of children, and the ugly specter of human trafficking," Moody wrote.

"It is high time for Congress and the executive branch to stop posturing, to acknowledge the magnitude of this crisis, to take immediate and forceful action to regain control of our southwest border and to combat the illicit importation of fentanyl and other synthetic opioids," Moody demanded.

"I urge you to enforce our existing immigration and drug trafficking laws vigorously, to provide the funds necessary for that vital enforcement effort, and to enact any additional legislative measures necessary to bring this crisis to a close now," she wrote, urging Congress to pass the FIGHT Fentanyl Act, which would "permanently add fentanyl-related compounds to Schedule I of the Controlled Substances Act"—something she said she "urged Congress to pass last year." 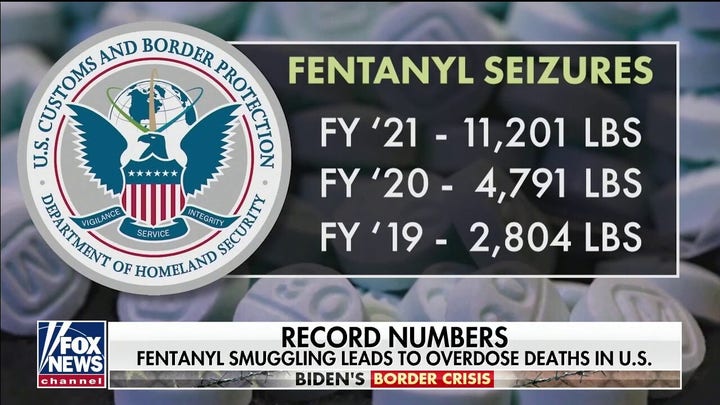 The letter by Moody comes after 16 Republican attorneys general, including Moody, wrote to the State Department urging it to put pressure on China and Mexico over "China’s complete unwillingness to police the production and distribution of fentanyl precursors and Mexico’s subsequent failure to control illegal manufacturing of fentanyl using those precursors."

They cited government data that shows that fentanyl smuggling directly from China has shrunk from 128 kilograms in 2017 to half a kilogram in 2020, but the amount smuggled over the U.S. Southern border has increased dramatically.

The attorneys general warned that they are seeing an "extraordinary tide of senseless death from fentanyl," with fentanyl accounting for three out of four of every drug death in West Virginia. In Florida, meanwhile, fentanyl was the leading cause of drug deaths in 2020 and deaths had risen 63%.