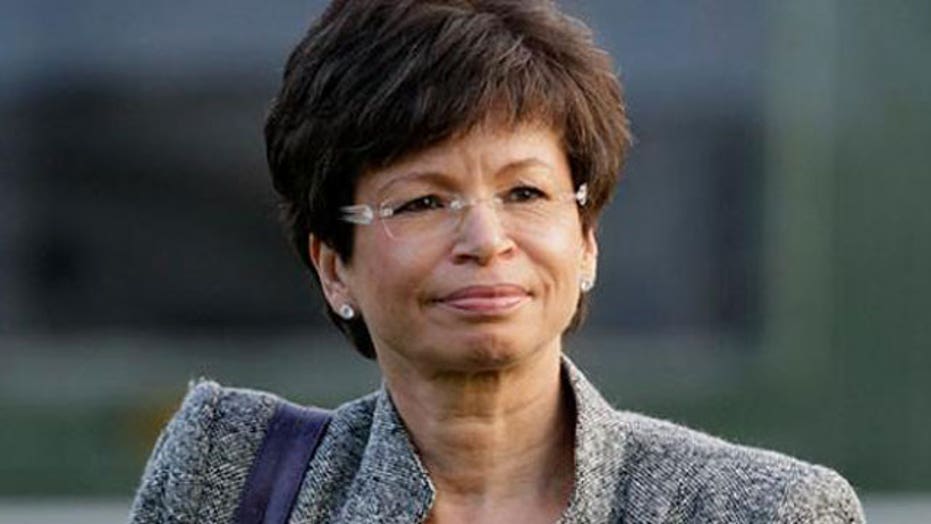 Senior White House adviser singled out in series of attacks

Is MSNBC Sinking as the Obama Network?

The media have identified the problem with the Obama presidency and want her tarred and feathered.

Or just fired. Or sidelined. Or made an ambassador to some faraway land.

Her name is Valerie Jarrett.

White House aide and longtime Chicago pal of Barack and Michelle Obama has been a target roughly from the day she stepped foot in Washington.

But now, in the wake of the Democrats’ midterm wipeout, the press is really unloading on her. She has become the scapegoat-in-chief.

The notion that a single staff person is responsible for most of the administration’s shortcomings over the last six years is rather far-fetched. Whether it’s ObamaCare or the VA or immigration or ISIS or Syria, it’s the president who is making the decisions and selling them. If the principal problem, as the president told Bob Schieffer on “Face the Nation,” was a failure to adequately communicate his policies, then the man with the bully pulpit must take most of the blame.

But the press has a shakeup mentality: all major political defeats must be followed by some kind of housecleaning. And reporters are getting tired of the story line about Obama essentially brushing off the debacle. So the journalistic knives are out for Jarrett.

It’s not hard to understand why. As a personal pal, Jarrett is easy to cast as the embodiment of the insularity of the White House. As the president’s protector, she has a track record of ticking off other administration officials. At the same time, Jarrett has no public successes attached to her name. And when she’s on television, she appears a rather robotic defender of her boss.

Although I’m told it’s a coincidence, it’s striking that Politico and the New Republic have both published tough pieces on Jarrett at roughly the same time. And these arguments brought a vigorous defense from Mika Brzezinski, with the “Morning Joe” co-host calling the attacks “sexist.” More on that in a moment.

White House officials believe the Politico essay has undertones of sexism, given that no questions are being raised about male advisers in similar, far-reaching roles.

The officials also see the criticism as providing a skewed view of Jarrett's role, which includes outreach to state and local officials and advocacy groups. She's hardly the only insider who offers advice outside her official duties, in this view, and keeps her friendship with the First Couple separate.

The New Republic story, by Noam Scheiber, vacuums up the internal sniping—without names attached, of course. One aide calls her influence “pretty toxic.” Another says she’s regarded “as a spy.”

The story details how Eric Holder’s visit to Ferguson was decided by three people: the president, the attorney general and Jarrett while vacationing on Martha’s Vineyard.

Jarrett also has “an outsize say on ambassadorships and judgeships. She helps determine who gets invited to the First Lady’s Box for the State of the Union, who attends state dinners and bill-signing ceremonies, and who sits where at any of the above. She has placed friends and former employees in important positions across the administration—‘you can be my person over there,’ is a common refrain.

“Not surprisingly, all this influence has won Jarrett legions of detractors. They complain that she has too much control over who sees the president. That she skews his decision-making with her after-hours visits. That she is an incorrigible yes-woman. That she has, in effect, become the chief architect of his very prominent and occasionally suffocating bubble.”

In fact, Obama aides were stunned when Jarrett told Obama on Air Force One during the campaign, “Mr. President, I don’t understand how you’re not getting 85 percent of the vote.”

The New Republic paints Valerie as the Barack Whisperer, saying “there is still a basic unknowability about him, a puzzling gap between his talents and the public’s enthusiasm for his years in office. No wonder Jarrett inspires such fevered theorizing. She is the closest we have to a human decoder ring—the only person who can solve the mystery of why this president has left so many feeling so unfulfilled.”

On balance, it says, “it appears that Jarrett has been more an obstructer than a facilitator over the past six years when it comes to governing, and it’s probably long past time for the president to move her gently into another role.

For starters, even today, nobody knows precisely what Jarrett does in the White House. What exactly do her titles—senior advisor to the president, assistant to the president in charge of the Office of Intergovernmental Affairs, the Office of Public Engagement, the White House Council on Women and Girls—mean? More to the point, Jarrett has often used the aura of authority that these titles give her to stand in the way of talented White House staffers and a smoother-running administration, according to several books.”

Rahm Emanuel tried to ease her out by getting Jarrett appointed to a Senate seat in Illinois, but Michelle objected. Robert Gibbs and David Plouffe also tried to push her out, according to Chuck Todd’s forthcoming book, because Jarrett had the “trump card” of her relationship with the first lady. Other West Wing staffers were “scared to death of her,” write Mark Halperin and John Heilemann.

“Her undefined role combined with what by all accounts has been almost unlimited proximity to the Obamas has proved a bad mix. She seems to isolate the president from people who might help him or teach him something—and if there’s one thing that has become clear about Obama, it’s that he doesn’t get to hear enough outside voices.”

Ah, but by relying so heavily on Jarrett, isn’t the president allowing himself to be isolated? These critiques often cast Obama as a drifting figure easily manipulated by his staff.

Now to MSNBC’s Mika, who admits her defense of Jarrett is in part personal:

“Yes, Valerie and I have a friendship. And despite this personal relationship, I am never reluctant to cover her in the news…

“Would these criticisms be leveled at men like John Podesta or Dan Pfeiffer? They work closely with the president. In fact, Ms. Jarrett was out of commission for the most important stretch of the campaign because of a serious medical procedure on her spine. So why is Valerie the focus of these ridiculous attacks?

“Perhaps it is because she is a woman.”

Conceding that the Politico author is a woman, Brzezinski says that “whether the attacks come from women or men in the media, it does seem that strong female advisors who are close to the president become the focus of the most hostile and catty criticism. Whether it was the horrific caricatures of Condi Rice, or the snide sneers aimed at Karen Hughes, or today’s unfair focus on Valerie, at this point the whole ‘blame-the-woman’ routine is just getting old.”

It’s fine for Mika, with the appropriate disclosure, to go to bat for her friend. But I don’t see a sexist phrase in either piece. And I can remember such top officials as Don Regan, John Sununu, Mack McLarty, Donald Rumsfeld and Bill Daley coming under media fire in previous administrations.

“The one difference between Jarrett and others who have wielded the same kind of power in the West Wing is that she is a woman. Were she a man, her job would not be subject to endless “What does he really do?” questions.”

It’s obviously the case that the administration needs fresh blood and a better strategy for the final two years. Valerie Jarrett isn’t going anywhere. But if she resigned today, would the performance of the White House dramatically improve?

Is MSNBC Sinking as the Obama Network?

Many critics, including me, have been trying to diagnose MSNBC’s declining ratings since it’s moved increasingly left. USA Today columnist Michael Wolff has an interesting take:

“MSNBC's problem is almost exactly the same as the Democrats' problem: It built its future around a vivid and dramatic hero who, unfortunately, turned out to be both opaque and conflict averse. MSNBC now has a lineup of ever-righteous and often sulky defenders of President Barack Obama, who seem, not just to conservatives but to many liberals, too, bizarrely tone deaf and lost in time…

“In character terms, the problem is making Obama sympathetic and compelling when he appears not to want to be either of those things. In dramatic terms, the problem is that he seems inclined to shrink in the face conflict rather than rise to it. Who really is eager to watch the Obama show?”