The leader of a union that represents a majority of California’s firefighters responded forcefully Saturday after President Trump threatened earlier in the day to cancel federal financial relief as deadly wildfires continued to ravage parts of the state.

While in Paris, Trump claimed that “gross mismanagement” of the state’s forests was to blame for three “massive, deadly and costly” fires.

In October, Trump made similar statements where he blamed California’s management of its forests for a horrific fire season, the Sacramento Bee reported.

“The president’s message attacking California and threatening to withhold aid to the victims of the cataclysmic fires is Ill-informed, ill-timed and demeaning to those who are suffering as well as the men and women on the front lines,” the statement read.

"At a time when our every effort should be focused on vanquishing the destructive fires and helping the victims, the president has chosen instead to issue an uninformed political threat aimed squarely at the innocent victims of these cataclysmic fires," he added.

Rice also said the notion that California mismanages its forests isn’t true. He reminded Trump that 60 percent of California’s forests are managed by the federal government.

“Natural disasters are not ”red” or “blue” – they destroy regardless of party. Right now, families are in mourning, thousands have lost homes, and a quarter-million Americans have been forced to flee.”

The Pasadena Fire Association also chimed in Saturday, saying the president was “wrong” and that  “the fires in So. Cal are urban interface fires and have NOTHING to do with forest management.”

Trump, who was in Paris to commemorate the 100th anniversary of the end of World World I, later sent two more tweets that were more subdued in tone and urged people to listen to evacuation orders.

"Our hearts are with those fighting the fires, the 52,000 who have evacuated, and the families of the 11 who have died. The destruction is catastrophic. God Bless them all," Trump wrote.

The Camp Fire in Northern California has resulted in at least 23 deaths and 105,000 acres charred since it began Thursday, according to a Cal Fire (California Department of Forestry and Fire Protection) incident page.

On Saturday, officials in Southern California announced two deaths in the Woolsey and Hill fires. More than 250,000 people, including the city of Malibu, have been ordered to evacuate and around 150 homes have been destroyed. 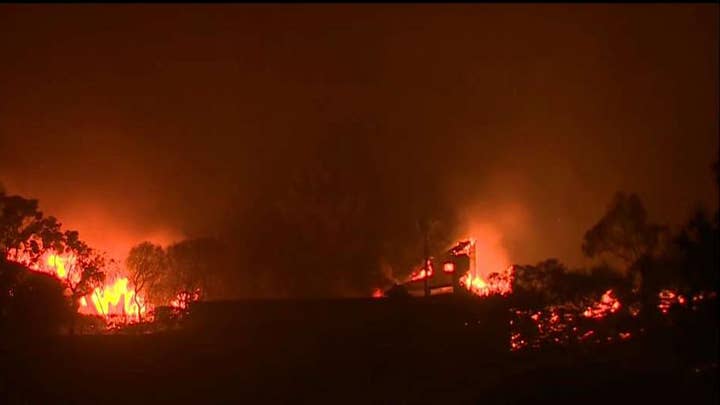 The devastation from the fires prompted the International Association of Firefighters to issue a statement Saturday, calling Trump's remarks "reckless and insulting to the fire fighters and people being affected."