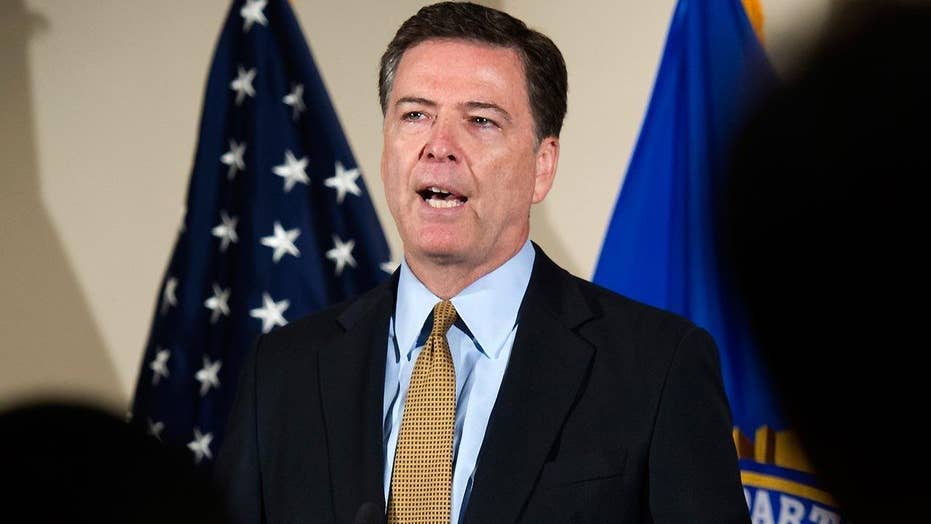 Why didn't James Comey take questions after announcing he was recommending no charges in Clinton private email server scandal? Fox News' Catherine Herridge has insight for 'On the Record'

FBI Director James Comey announced Tuesday that despite evidence Hillary Clinton was “extremely careless” in her handling of classified emails on a private server, the bureau will not recommend to the Department of Justice that criminal charges be brought against the former secretary of state.

“Our judgment is that no reasonable prosecutor would bring such a case,” Comey said.

"We are pleased that the career officials handling this case have determined that no further action by the Department is appropriate.," he said. "As the Secretary has long said, it was a mistake to use her personal email and she would not do it again. We are glad that this matter is now resolved."

Trump later issued two seperate statements on the matter including one that in part read: "Comey let Clinton off the hook. ... The fix was final. The Obama administration's anointed successor has had an indictment removed from her
path and will now be able to glide to the rigged Democrat nomination."

Despite not recommending charges be brought against Clinton, Comey delivered a blistering rebuke of her actions, saying the FBI found that 110 emails were sent or received on Clinton's server containing classified information.

He added it was possible that people hostile to the U.S. had gained access to her personal email account.

Comey said seven email chains were classified at the “Top Secret/Special Access Program level” when they were sent and received on Clinton’s server.

“There is evidence to support a conclusion that any reasonable person in Secretary Clinton’s position, or in the position of those government employees with whom she was corresponding about these matters, should have known that an unclassified system was no place for that conversation,” Comey said.

Tuesday's decision helps remove what was arguably the biggest threat to her presidential campaign going forward – a criminal referral that could have led to an indictment – just weeks before her party’s national convention in Philadelphia, where she is set to seal her nomination as the Democrat standard-bearer.

Clinton consistently had downplayed the FBI investigation, even calling it a “security review,” and as recently as June 3 said there was “absolutely no possibility” she’d be indicted. Weeks ago, a scathing State Department inspector general report directly countered her long-running claim that her personal email use was allowed, though her campaign continued to defend the candidate’s actions.

In the wake of that report, Trump, the presumptive Republican presidential nominee, stepped up his criticism of her email actions and said she belongs in “jail.”

The DOJ decision does not strip the email controversy as a campaign issue – Trump and the Republicans are sure to keep hammering it as the campaign lurches into full general election mode post-conventions – but shows the federal investigation did not determine the actions to be criminal, even if they were ill-advised and potentially damaging to national security.

House Speaker Paul Ryan of Wisconsin, a Republican, said the decision not to prosecute Clinton defied explanation, adding: "No one should be above the law."

The decision comes more than a year after knowledge of Clinton’s use of a personal email account and server first became public. Clinton responded at the time with a point-by-point written explanation and a press conference in which she said she had opted to use her personal server for “convenience.”

But critics said she was clearly circumventing government systems in order to try to shield her communications from public records requests, potentially putting sensitive and highly classified government secrets at risk in the process.

During a subsequent review, more than 2,000 emails on the server were found to have contained information now deemed classified, though they apparently were not marked classified when sent.