An internal FBI memo is warning of plans for armed protests in all 50 state capital cities ahead of President-elect Joe Biden’s Inauguration, Fox News has learned.

A federal law enforcement source told Fox News that an internal bureau memo is warning that the protests could be staged before, on, and after Inauguration Day.

FBI VISITED EXTREMISTS BEFORE CAPITOL RIOTS, URGED THEM NOT TO TRAVEL TO WASHINGTON DC

In a statement to Fox News, the FBI said that they do not comment on "specific intelligence products," but said that the FBI "is supporting our state, local, and federal law enforcement partners with maintaining public safety in the communities we serve."

"Our efforts are focused on identifying, investigating, and disrupting individuals that are inciting violence and engaging in criminal activity," the FBI said. "As we do in the normal course of business, we are gathering information to identify any potential threats and are sharing that information with our partners.The FBI respects the rights of individuals to peacefully exercise their First Amendment rights."

The FBI added: "Our focus is not on peaceful protesters, but on those threatening their safety and the safety of other citizens with violence and destruction of property."

The memo comes as Fox News has learned the FBI has received more than "40,000 digital media tips, including video and photos, from the public" regarding participants in last week’s Capitol riot.

Sources told Fox News on Sunday that the FBI visited extremists prior to the Jan. 6 pro-Trump rally and Capitol riot, urging them not to travel to Washington D.C.

It is unclear, at this point, how many extremists were contacted and how far in advance of Jan. 6.

Pro-Trump protesters stormed the Capitol on Jan. 6, sending Congress into recess and the Capitol building into lockdown as members attempted to certify the results of the presidential election in favor of President-elect Joe Biden.

The president spoke earlier in the day in Washington at a rally to supporters, who later marched to the Capitol. He further pressured Vice President Mike Pence to act on his own to decertify the results of the election and send them back to the states for recertification. 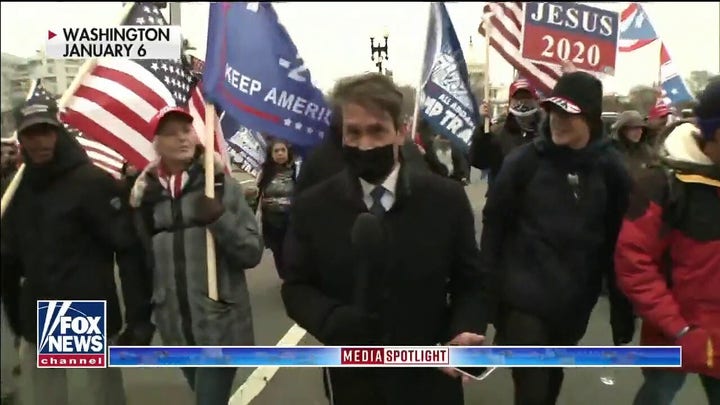 Pence, before the joint session of Congress began, said he did not believe, under the Constitution, that he had the authority to "unilaterally" accept or reject electoral votes.

As members of the House and Senate debated and raised objections to certain electoral votes, both chambers were forced to recess and evacuate their chambers as protesters stormed the Capitol, sending it into lockdown for hours.

Washington police said the riot at the Capitol resulted in five deaths -- including a Capitol Police officer and a woman who was shot inside the building -- and at least 70 arrests.

The Justice Department has charged more than a dozen people involved in the riots, and dozens more have been charged in Superior Court in Washington D.C. with unlawful entry, curfew violations, and firearms-related crimes.

NBC News first reported that the FBI visited extremists planning to attend the pro-Trump rallies that the FBI warned Capitol Police of potential violence that day.

Despite warnings about pro-Trump demonstrations in Washington, Capitol Police did not plan to bolster staffing and did not anticipate that the demonstration would escalate into a massive violent riot, according to people briefed on law enforcement's response.

The Capitol Police response has drawn condemnation from lawmakers and prompted the ouster of the department's chief and the sergeants-at-arms of both the House and Senate.

Meanwhile, now former-U.S. Capitol Police chief Steven Sund reportedly asked his supervisors ahead of time for permission to request that the D.C. National Guard be on standby if the situation spiraled out of control, but was denied.

Fox News' Stephanie Pagones and The Associated Press contributed to this report.