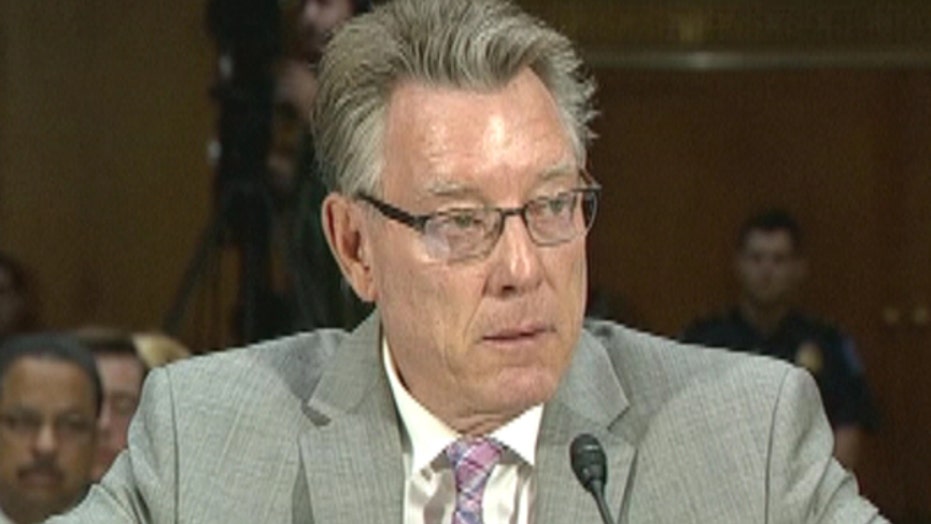 The father of the young woman killed earlier this month along a San Francisco pier on Tuesday blasted the "legal loopholes" that allowed the illegal immigrant suspected of pulling the trigger to be released despite a rap sheet that included seven felonies and five past deportations.

In dramatic Capitol Hill testimony, Jim Steinle and other relatives of people killed by illegal immigrants called on Congress to pass new laws aimed at keeping illegal immigrant criminals off the streets.

"It's unbelievable to see so many innocent Americans that have been killed by undocumented immigrant felons in recent years," Steinle said.

His daughter, Kathryn Steinle, 32, was killed July 1, allegedly by Mexican illegal immigrant Francisco Sanchez. The case has re-ignited a national debate over immigration enforcement at the federal level and sanctuary city policies at the local level.

Sanchez had been turned over to San Francisco by federal officials in March on a decades-old drug warrant, but was released by the sheriff's office the next month. Federal immigration officials, who asked to be notified of his release, were never informed.

Steinle recalled his daughter's spirit and personality in brief but powerful remarks. She loved to travel, he said, and had a "smile that would light up a room."

She had traveled to Spain, Thailand, South Africa and beyond. He recalled how he was walking alongside her on the San Francisco pier July 1, when, "suddenly, a shot rang out."

"Kate fell, and looked at me and said 'help me, Dad'," her father recalled. They were the last words he heard from her.

"Everywhere Kate went throughout the world, she shined the light of a good citizen of the United States of America," he testified. "Unfortunately, due to disjointed laws and basic incompetence at many levels, the U.S. has suffered a self-inflicted wound in the murder of our daughter by the hand of a person who should have never been on the streets of this country."

Though Steinle's death has renewed the debate over immigration enforcement, she was one of many Americans killed in recent years by illegal immigrants.

Danny Oliver was a Sacramento sheriff's deputy, but was killed in a motel parking lot by an illegal immigrant with a criminal background.

"Not a day has gone by where this has not affected me," Susan Oliver testified, choking up at times during her remarks. "... I don't think I will ever get past that day."

They testified before the Senate Judiciary Committee. Panel Chairman Chuck Grassley, R-Iowa, said the Obama administration has "completely failed to do anything about sanctuary cities."

During the second part of the hearing, Immigration and Customs Enforcement Director Sarah Saldana faced tough questioning from lawmakers -- who like Grassley suggested ICE has not gone far enough to crack down on sanctuary cities.

Saldana said she was "greatly moved" by the testimony earlier in the hearing and said to them, "I'm so sorry." But she said there's some "solace" in bringing perpetrators to justice, as she underscored the importance of seeking the removal of convicted criminal aliens.

San Francisco is among dozens of cities with so-called sanctuary policies restricting the coordination between local and federal immigration officials.

In San Francisco, however, the sheriff's department went a step further with a directive in March telling deputies not to inform Immigration and Customs Enforcement about detainees' release details.

"A simple phone call would have been enough. But that did not happen," she said.