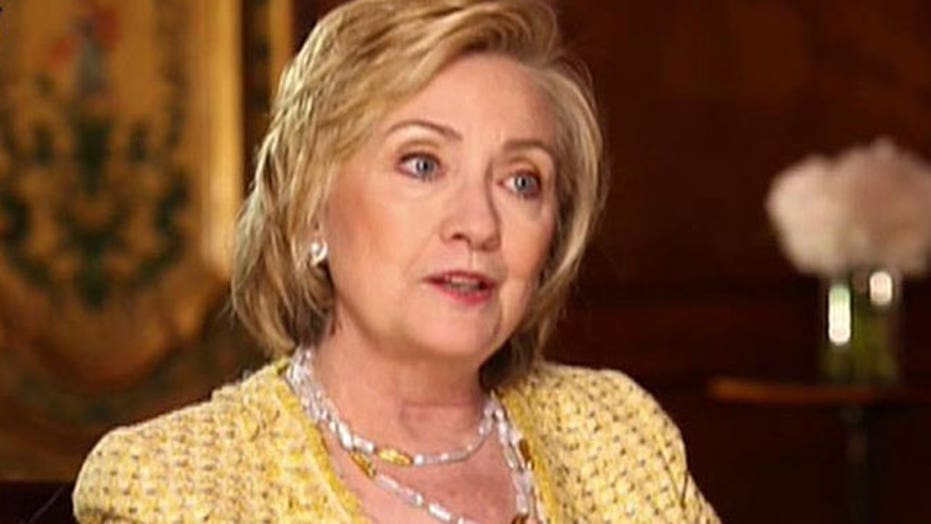 Hillary Clinton’s newly released memoir leaves little doubt she was the first member of the Obama administration to publicly link an anti-Islam video to the 2012 Benghazi terror attack – though she does not explain what intelligence she relied on to make the faulty connection.

The former secretary of State and potential Democratic presidential candidate discussed the Benghazi attack in her memoir “Hard Choices.” The 33-page Benghazi chapter sheds some light on events, but it leaves plenty of inconvenient details out.

According to the chronology she offers, Clinton issued the statement linking Benghazi to the video before she called President Obama on the night of the attack to provide an update, suggesting she was the originator of the flawed explanation.

The accuracy of the mortar attack, three out of five rounds on target, from more than a half mile away in the dark of night in under a minute, required military training, and premeditation according to multiple military and intelligence professionals.

“As we work to secure our personnel and facilities, we have confirmed that one of our State Department officers was killed. We are heartbroken by this terrible loss,”Clinton’s press release said. “Some have sought to justify this vicious behavior as a response to inflammatory material posted on the Internet."

In her book, Clinton makes passing reference to the Sept. 11 press release, and the former secretary of state offers this argument for citing the video:that violence was erupting all over the Middle East and the obscure Internet video was to blame, throwing Benghazi, without credible intelligence reporting, into the same category.

“[The video] was unquestionably inciting the region and triggering protests all over, so it would have been strange not to consider, as days of protests unfolded, that it might have had the same effect here, too,"Clinton wrote. "That's just common sense."

But sources told Fox News in late September 2012 that U.S. officials knew it was terrorism within 24 hours and U.S. personnel on the ground in Libya reported a direct assault -- not a protest gone awry.

Recently released documents to conservative watchdog Judicial Watch show the Obama administration continues to withhold the full contents of a "media strategy" discussion it had weeks after the attack.

Those emails pertained to a Sept. 27, 2012, Fox News report on how U.S. officials learned the attack was terrorism within 24 hours. The emails were circulated to the State Department and at senior levels of the administration, including to White House communications adviser Ben Rhodes, who also linked the anti-Islam video to Benghazi in a Sept. 14 email.

The administration claims that releasing the contents would have a chilling effect on their "frank deliberations."

In her book, Clinton did not refer to the Rhodes email, which stated one of the goals for then-U.N. Ambassador Susan Rice's controversial Sunday show appearances six days after the attack was "to underscore that these protests are rooted in an Internet video, and not a broader failure of policy."

"A seven-page dialogue concerning one Fox News report to me demonstrates an alarm bell situation where they are reacting to and trying to shape a response," senior Judicial Watch investigator Chris Farrell told Fox News in a May interview. "There was a contrarian news report that didn't align with their position and they were clearly reacting to it in a way that would help reinforce their position."

In "Hard Choices," Clinton described the emotional toll of meeting with the families at Andrews Air Force Base on Sept. 14, 2012, when the bodies of the four Americans, including Stevens, were returned to Washington. "Sean Smith and Tyrone Woods both had small children,” Clinton wrote. “Seeing them there, knowing they would grow up without their fathers, was almost more than I could bear.”But she did not mention her comments to the father of Ty Woods. Asked about the book, Charles Woods reiterated his claim that rather than offering comforting words, Clinton told him: "We are going to have the person responsible for the video arrested" -- which he says he found odd given the event's tone.

On losing the four Americans, Clinton says it was a "crushing blow" -- while at the same time, seeming to blame Ambassador Stevens for going to Benghazi on the 9/11 anniversary, a high-risk period.

"Chris made decisions about his movements based on the security assessments of his team on the ground, as well as his own judgment. After all, no one had more knowledge or experience in Libya than he did. He was well aware of the lawlessness in Benghazi, including a series of incidents earlier in the year against Western interests."

There is nothing in "Hard Choices" about congressional testimony that Clinton had tasked Stevens to go to Benghazi because she wanted the temporary mission converted into a permanent post. Stevens apparently had to file the necessary paperwork before a State Department budget deadline of Sept. 30, 2012.

"According to Chris, Secretary Clinton wanted Benghazi converted into a permanent constituent post,"Stevens’ Deputy Chief of Mission Greg Hicks testified in May 2012 before the House oversight committee.

"I did tell the accountability review board that Secretary Clinton wanted the post made permanent. Ambassador (Thomas) Pickering was surprised. He looked both ways, to the members of the board, saying, 'does the 7th floor know about this?'

On security, and what she knew about the grave conditions in Benghazi, Clinton dismissed State Department cables copied to her as a "procedural quirk" – she wrote that the security cables never "reached my desk" and that she was not required to act on them because "security matters are handled by officials responsible for security."

But in July and August 2012, documents reviewed by Fox News show there were at least two emergency meetings in Benghazi about security, and one cable signed by Stevens and addressed to Clinton’s office foreshadowed how the four Americans would die.

Summarizing an Aug. 15, 2012, emergency meeting convened by the U.S. mission in Benghazi, the Aug. 16 cable marked "SECRET" said that the State Department's senior security officer, also known as the RSO, did not believe the consulate could be protected.

"RSO (Regional Security Officer) expressed concerns with the ability to defend Post in the event of a coordinated attack due to limited manpower, security measures, weapons capabilities, host nation support, and the overall size of the compound," the cable said.

According to a review of the cable, the Emergency Action Committee was also briefed "on the location of approximately ten Islamist militias and AQ training camps within Benghazi -- these groups ran the spectrum from Islamist militias, such as the QRF Brigade and Ansar al-Sharia, to 'Takfirist thugs.'" Each U.S. mission has a so-called Emergency Action Committee that is responsible for security measures and emergency planning.

In addition to describing the security situation in Benghazi as "trending negatively," the cable said explicitly that the mission would ask for more help. "In light of the uncertain security environment, US Mission Benghazi will submit specific requests to US Embassy Tripoli for additional physical security upgrades and staffing needs by separate cover."

Clinton told Rep. Michael McCaul, R-Texas, during congressional testimony in January 2013: "That cable did not come to my attention. I have made it very clear that the security cables did not come to my attention or above the assistant secretary level -- 1.43 million cables a year come to the State Department. They are all addressed to me. They do not all come to me. They are reported through the bureaucracy."

But the warnings contained in the August cable were deemed so significant that they were brought to the attention of Clinton's Cabinet colleagues, including then-Defense Secretary Leon Panetta and Chairman of the Joint Chiefs Gen. Martin Dempsey, as well as Gen. Carter Ham, the former head of the African command.

"So you were aware that Ambassador Stevens, of his cable, that said that the consulate could not withstand a coordinated attack -- is that right?" Sen. Kelly Ayotte, R-N.H., asked during the January hearing.

"Yeah, I was aware of the communication back to the State Department,"Dempsey replied.

Panetta added: "And to deal with that -- I mean, that's not our responsibility, frankly, that's the State Department's responsibility.”

Under aggressive questioning by Sen. Lindsey Graham, R-S.C., Dempsey said: "I would call myself surprised that [Clinton] didn't" know about it."

Sen. Saxby Chambliss, R-Ga., ranking Republican the Senate intelligence committee, which issued a bipartisan report on the Benghazi attack in January, told Fox News that the State Department blocked access to the August classified cable until the eleventh hour.

In “Hard Choices,” Clinton states the CIA operation was so “secret” that it took weeks before the role of Ty Woods and Glenn Doherty could be publicly discussed because they were agency contractors. Clinton does not offer specifics about the relationship between the State Department and CIA in Benghazi.

The head of the newly appointed Benghazi Select Committee, Rep.Trey Gowdy , R-S.C., has indicated he wants a fuller explanation of the dynamic, and why the State Department stayed in eastern Libya when other Western nations had left.