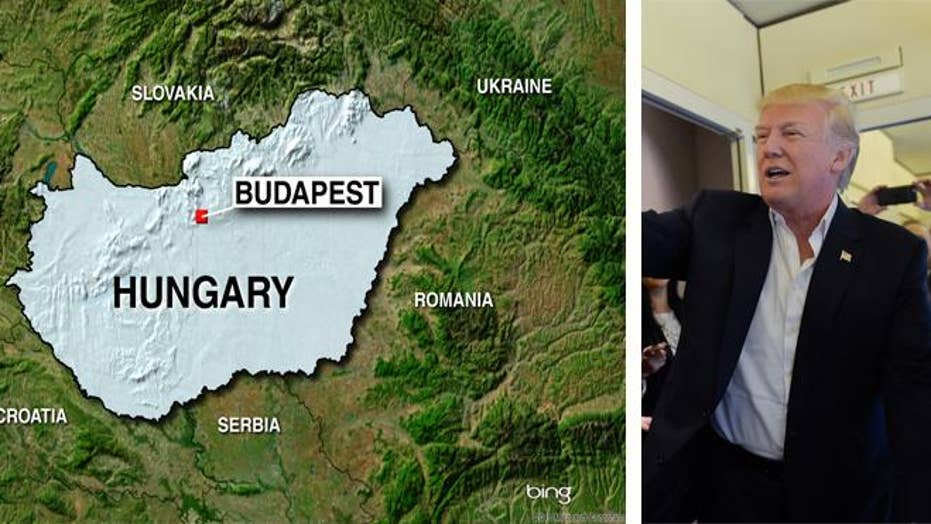 Could Trump find an ally in Hungary?

Strategy Room: Joe Lestingi and Charmaine Yoest on whether the White House and the European nation can find common ground on refugees

While countless European politicians have grumbled at the change in tone under the Trump White House, particularly on the Syrian refugee crisis, at least one populist leader across the Atlantic sees his government’s policies being vindicated and bolstered by the new American president.

In the central European nation of Hungary, situated on a key route for refugees fleeing the Middle East for Europe, the government in 2015 raised a barbed-wire border fence and has taken a hard-line stance ever since -- going so far as to deploy troops to the Serbian border to intercept migrants. Populist Prime Minister Viktor Orbán last month said he would, instead, accept European “true refugees” who have “lost” their homelands.

Hungary was widely criticized by many European leaders for a position that stands in stark contrast to the open-arms policies of nations like France and Germany. But now, with President Trump in the White House moving to clamp down on refugee admissions -- and pushing a nationalist agenda, one he underscored in his speech to Congress Tuesday night -- Hungary’s ruling Fidesz party is feeling emboldened.

“[Before Trump] if you articulated that you see your country as first, your country’s interests as first, the security of your people as first, you were immediately considered fascist, extremist, nationalistic, whatever -- all kinds of bad words,” Hungarian Foreign Minister Péter Szijjártó told Fox News in a recent interview at the United Nations in New York.

“Now we have the right and the braveness, in every country, to say for the leadership of that given country, that that country is the first. It has enabled us to name the challenges as they are,” he said. “… With Donald Trump winning, the era of hypocrisy and political correctness should be over.”

Hungary is now hoping for a relationship significantly warmer than the ice-cold connection the country had with Obama’s administration.

Szijjártó says the Obama administration attempted to interfere in their internal politics and issued a list of things Hungary needed to do to enhance the relationship -- which Hungary condemned as an interference in its internal politics.

But with Trump in the White House, Orbán’s government is reflecting new confidence by doubling down on existing policies. The government announced this week that it has started building a second border fence, with heat sensors and cameras installed, in anticipation of a fresh wave of migrants from the Middle East in 2017.

“With Donald Trump winning it is easier as the international pressure on us is tangibly lower,” Szijjártó said.

In line with Trump’s calls for lower taxes, the Hungarian government also has slashed its corporation taxes to 9 percent, and has a flat tax of 15 percent as a way of incentivizing investment.

Trump’s softer stance toward Russia, meanwhile, has met with approval from Orban’s government even as it causes some angst within the Republican Party in the U.S. Szijjártó says Central European countries are always the loser when East and West fight, and so they are hoping for a positive outcome from renewed discussions.

“All we can do is cross our fingers that the two come together and build a pragmatic relationship than the current one, and as Donald Trump says, make a deal,” he said.