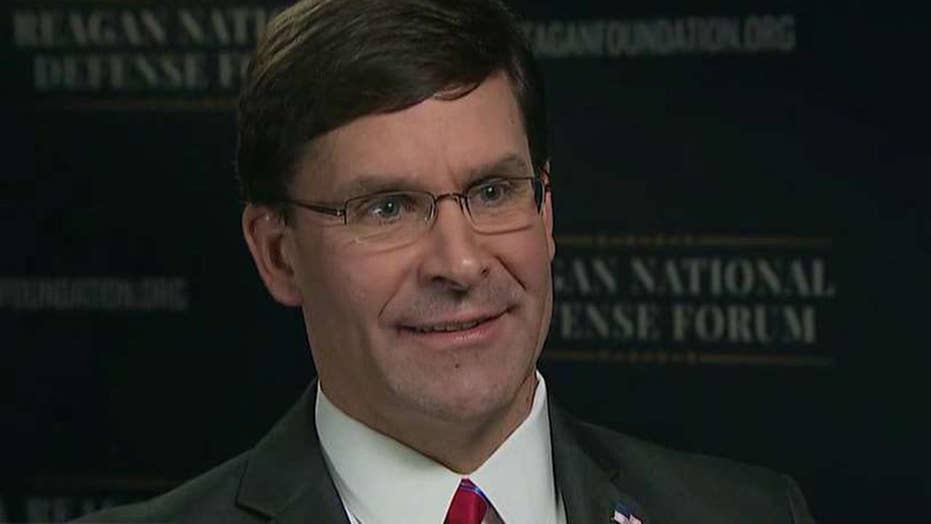 Secretary of Defense Mark Esper was reluctant to discuss details behind the withholding and release of military aid to Ukraine, but he did reject the notion that the delay had any negative effect on national security.

Over the course of the House impeachment inquiry of President Trump, Democrats have been accusing the president of using the aid and a White House visit with Ukrainian President Volodymyr Zelensky as leverage to get them to investigate his political opponents. Democrats claim that by putting political interests ahead of national interest, Trump put national security at risk. Esper was quick to deny such a claim.

"At the end of the day, the bottom line is most of that aid got out on time and at no time did it have any impact on United States national security," Esper said.

Esper said there were three factors that were considered regarding the aid.

"When I came onto the scene, the three things we were looking at were this: one, was the aid necessary and vital to the Ukrainians in terms of defending against Russia; No. 2, had the Ukrainians addressed corruption, and that was a congressional concern; and No. 3, were other countries in the region, other allies and partners assisting them. And given those three things we decided to support the provision of Ukrainian aid."

Esper would not address whether there were any political factors involved in the delay of the aid's delivery, citing the ongoing impeachment inquiry.

"I'll leave that process unto itself," he said.

Esper also discussed a number of other issues related to national security. He addressed the shooting at the naval air station in Pensacola, Fla., where Americans were killed before the suspect, a Saudi Air Force officer, was shot and killed. The defense secretary would not definitively state whether the incident should be classified as terrorism.

"I don't know yet. I think that's why it's important to allow the investigation to proceed, to understand exactly what he was doing and why."

Esper did say he called on officials to "begin review of what our screening procedures are with regard to foreign nationals coming into the United States." At the same time, he emphasized the need to maintain programs where foreign individuals come to train with U.S. forces.

"The ability to bring foreign students here to train with us, to understand American culture, is very important to us in building those long-term relationships that keep us safer."

Esper also addressed how the U.S. was prepared to respond to potential "bad behavior" on the part of Iran.

"We've reached a point, I think, that we've deterred Iranian bad behavior," Esper said, pointing to an end in recent Iranian aggression that included attacks against ships in the Strait of Hormuz and shooting down of a U.S. drone.

But when asked about Iran's latest military efforts, including shipping missiles to other countries in the region and the testing of a ballistic missile that has the capability of delivering a nuclear weapon, Esper said that the U.S. is ready to act, if need be.

"We are prepared to respond, depending on what Iran does," he said. "And they need to understand that our restraint should not be interpreted as weakness."