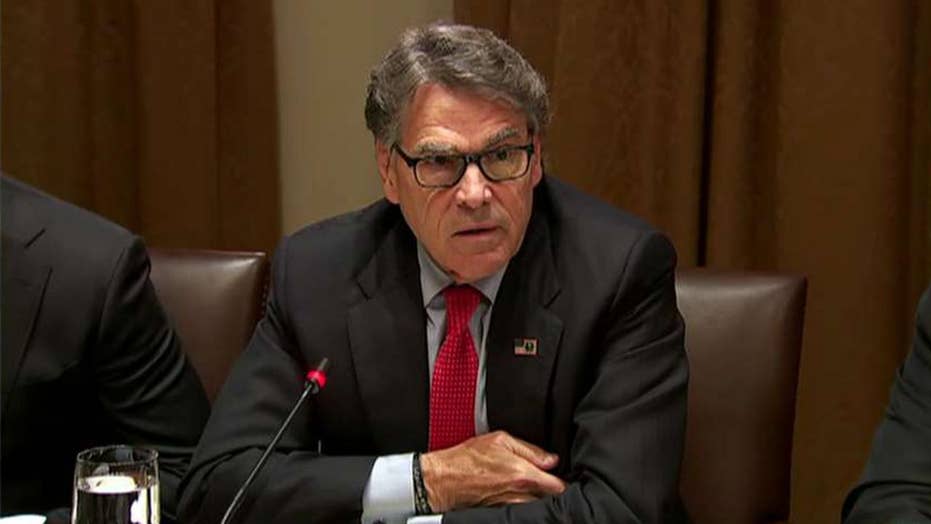 Perry was traveling with the president to Texas when he shared the news aboard Air Force One. Speaking to reporters later Thursday, Trump called Perry "outstanding" and announced, "We already have his replacement." But, Trump said Perry would stay on until the end of the year.

Fox News is told Perry had planned to resign at the end of the year. However, the former Texas governor had come under scrutiny over the role he played in the president's dealings with Ukraine, which are currently the subject of an impeachment inquiry -- raising questions as to whether the probe factored into his announcement Thursday. House Democrats subpoenaed Perry earlier in the day as part of their investigation.

Perry was scheduled to attend an energy conference overseas with U.S. Ambassador to the European Union Gordon Sondland, who testified Thursday in Democrats' inquiry. A Capitol Hill source and an official at the Energy Department told Fox News that Perry is still slated to head to Brussels and the Middle East next week as planned.

Multiple administration sources reiterated to Fox News that Perry was central to the apparent foreign policy operation to encourage a Ukrainian investigation into Joe Biden's actions involving the country. They said Perry was one of a handful of officials working this matter hand-in-glove with Trump and the president's personal attorney Rudy Giuliani.

Perry had disputed reports that he was planning to leave the administration in an interview Wednesday with The Wall Street Journal. But, he reportedly left the door open, saying he expected to be at the Energy Department at Thanksgiving, but giving a less definitive answer when asked whether he'd be there through the end of the year.

Energy Secretary Rick Perry gesturing as he arrived on Air Force One with President Trump at Naval Air Station Joint Reserve Base in Fort Worth, Texas, on Thursday. (AP Photo/Andrew Harnik)

In their subpoena, the chairmen of the House Intelligence, Foreign Affairs and Oversight committees asked Perry to provide documents related to a Ukrainian state-owned energy company as well as his involvement in a July call between Trump and Ukrainian President Volodymyr Zelenskiy. The lawmakers set a deadline for Oct. 18.

Trump has said Perry teed up the July 25 call, in which Trump pressed Ukraine to investigate Joe Biden and his son Hunter, who was employed by a Ukrainian gas company. Hunter obtained the highly lucrative role despite no relevant expertise while his father, as vice president, was overseeing Ukraine policy.

Perry said in the Journal interview that the president told him to seek out Giuliani earlier this year to look into possible Ukrainian corruption.

"Visit with Rudy," Perry recalled Trump telling him. He told the paper that Trump was not convinced that Kiev had "straightened up" its act. Perry told the paper he never heard Trump or Giuliani talk about an investigation into the Bidens.

Shaylyn Hynes, a spokeswoman for Perry, has said he wanted Trump to speak with the Ukrainian leader on energy matters related to U.S. efforts to boost Western energy ties to Eastern Europe, part of a long-term effort to lessen the political control Russia has wielded through its dominance of the fuel supply.

"Recently, public reports have raised questions about any role you may have played in conveying or reinforcing the president's stark message to the Ukrainian president," the three chairmen wrote. "These reports have also raised significant questions about your efforts to press Ukrainian officials to change the management structure at a Ukrainian state-owned energy company to benefit individuals involved with Rudy Giuliani's push to get Ukrainian officials to interfere in our 2020 election."

Hynes said the Energy Department received a letter from the House committees and was reviewing it.

Republicans, meanwhile, praised Perry's role in the Trump administration, as well as his leadership as governor of Texas.

“Rick is a good man and a good friend who has devoted his life to serving his country, especially the great state of Texas," Texas GOP Sen. Ted Cruz said in a statement. "He went from being Texas’ longest-serving governor to heading the Department of Energy, where he was a leading advocate for U.S. energy, including liquefied natural gas. Under his leadership, U.S. oil and gas production has soared—with much of that new production coming from Texas—and the United States has become a net exporter of natural gas, creating good-paying jobs, providing cleaner and more affordable energy, and boosting America’s energy independence. I wish him the best as he returns to private life after a long, successful, and productive career.”