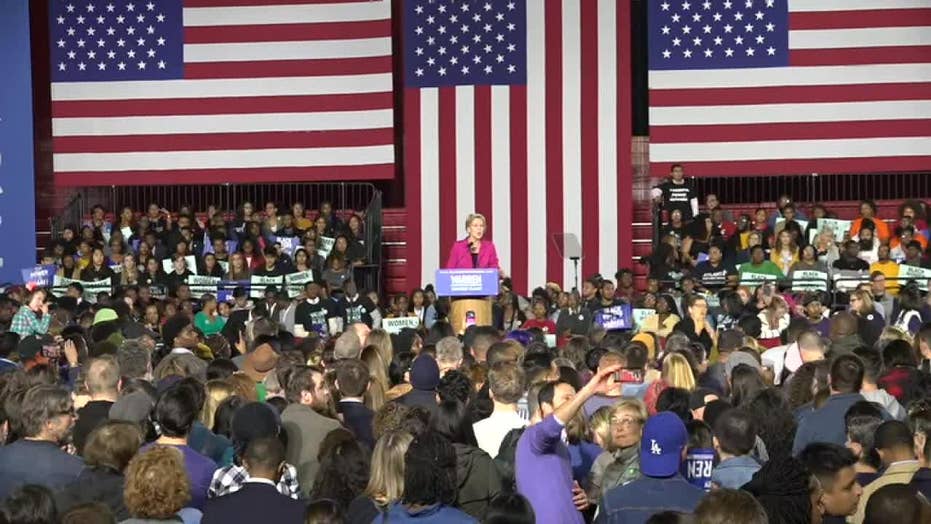 A rally in Atlanta featuring Democratic presidential candidate Sen. Elizabeth Warren devolved into chants from competing sides Thursday as protesters interrupted the senator -- and her supporters tried to drown out their message.

“Fighters I want to talk about tonight are black women,” Warren began, drawing applause and cheers. “As a white woman I will never fully understand the discrimination, the pain, the harm that black Americans have experienced just because of the color of their skin."

“Our children, our choice!," they shouted, with Warren trying to speak over them.

AYANNA PRESSLEY, IN BREAK FROM THE 'SQUAD,' BACKS WARREN FOR PRESIDENT

Warren supporters then tried to drown out the protesters by chanting "Warren!" "Warren!"

The protesters then countered with “Dream big, our choice!”

“Alright, so let’s talk a little,” Warren said, attempting to engage with the dissenters.

But the protesters continued chanting, first "We want to be heard!” and then back to “Our children, our choice!”

Warren then tried to regain control of the event.

“I know everyone wants to be heard," she said, "and that’s a good thing.”

She then attempted to resume her speech, but was soon interrupted again.

Pressley, who had introduced Warren, eventually returned to the stage.

“I want to say something,” Pressley said. “No one is here to quiet you -- at least not this black woman who knows what it is when people try to put me in a corner and tell me to be quiet.”

“You are welcome here,” Pressley continued. “The senator is here to talk about the contributions, fighters like you, have made to history so in this moment, there are many people that do not know this story because we have rendered as a historical footnote in history so I am going to appeal to you to not dishonor that history.”

She said, “We are grateful for your activism and your voice and you are welcome here and we would love to convene after this about the issue that you are here to stoke our consciousness about.”

“But when these women have been ignored this long, this is their moment and we are going to hear the story,” Pressley concluded.

She was met by loud applause and a standing ovation.

The crowd then started to chant “Warren!” and the presidential hopeful continued her speech without further interruptions.

It was not immediately known if the protesters actually convened after the speech to discuss the issue they were chanting about with Warren and Pressley.

After the event, one protester told Fox News she was part of a parent activist group from Camden, N.J., that attended Thursday night’s rally in Atlanta.

She said it was the group’s first public protest and they were hoping to stage more demonstrations at events of other candidates.

The group, comprised mostly of parents and caretakers fed up with “failing public schools,” said they oppose Warren’s stance on charter schools, saying they are "pro school choice."

Pressley announced earlier this month that she is backing Warren for president — breaking from her fellow members of the "Squad,” who support Sen. Bernie Sanders. The Sanders backers include Reps. Alexandria Ocasio-Cortez, D-N.Y., Ilhan Omar, D-Minn., and Rashida Tlaib, D-Mich.

“This election is a fight for the very soul of our nation. Elizabeth knows how to fight and knows how to win,” Pressley said in a video statement. “I’m proud to call her my senator. I can’t wait to call her our president.”

Attracting Pressley's endorsement was a coup for Warren, as Pressley and the others "Squad" members attract media attention and have helped set the Democrats' agenda for the 2020 election.