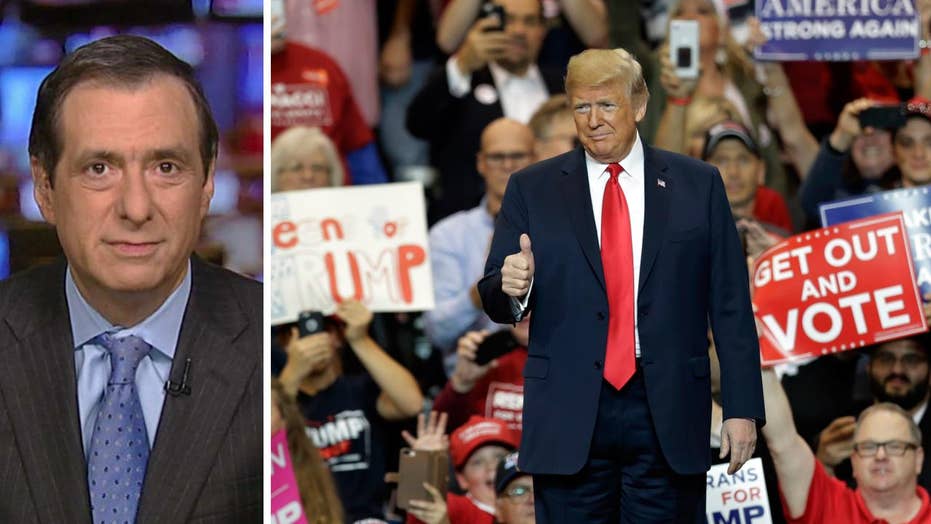 'MediaBuzz' host Howard Kurtz weighs in on why, if Donald Trump is such a terrible president, the Democrats aren't the overwhelming favorites in the midterm elections.

As the media are awash in predictions and prognostications about today's elections, one question I find fascinating is this:

Why haven't the Democrats run away with this thing?

After all, if Donald Trump is as terrible a president as the press has been proclaiming for nearly two years, the opposition party should be riding a wave of revulsion to victory.

The Dems are favored to win the 23 seats needed to win the House, and some pundits are saying they'll take considerably more, but the fact that even the minimum outcome is in doubt shows a far more competitive election than was forecast a month or two ago.

So perhaps Trump, and the Republican candidates following his lead, are better at electoral politics than the wise guys thought. And you can't blame it all on "fear-mongering," even though the president has chosen to close on immigration rather than the booming economy.

There is no question that these midterms are largely about Trump, and that he has quite consciously ensured that his name is virtually, though not literally, on the ballot.

A provocative theory comes from Ross Douthat, the conservative New York Times columnist and a sharp Trump critic. He cites the often-vast "gulf" between "the hysteria of liberals who write about politics for a living and the relative calm of Democrats who practice it."

He says that on liberal Twitter, democracy itself hangs in the balance "and every Trump provocation a potential Reichstag fire. But on the campaign trail, with some exceptions and variations, Democrats are being upbeat and talking about health care and taxes and various ambitious policy ideas, as though this is still America and not Weimar, a normal time and not a terrifying one."

Maybe the liberal pundits are saying things that the politicians can't, but Douthat argues the Democrats are very lucky.

If Trump had governed like a "generic Republican," he'd be more popular and the Democrats would be toast. And if Trump had followed through on the populist promises of 2016, Douthat says, "this strategy could have easily cut the knees out from under the Democrats' strongest appeal, their more middle-class-friendly economic agenda, and highlighted their biggest liability, which is the way the party's base is pulling liberalism way left of the middle on issues of race and culture and identity."

In this view, Trump drives liberals crazy with his culture war and Twitter crusades, but this in turn lets the Democrats off the hook.

I'd be cautious about even the smart analysts who say if only Trump had done this or that, he'd be in a stronger position. Who among them thought Trump would ever win the White House? He has a gut feeling about elections, and while it's fine to criticize his tone, language and choice of subjects, he may well be right that warning about illegal immigration gets more Republicans to the polls than boasting about last year's tax cut.

A more vociferous Never-Trumper, NYT conservative Bret Stephens, says the president may have outwitted the opposition by pounding away at the caravan:

"To which the Democratic response is — what, exactly?

"If it’s 'compassion,' it’s a non-answer. If it's to abolish ICE, it's a dereliction of responsibility for governance. If it's to open the border, it is an honest form of political suicide. If it's more trade and foreign aid for Central America, that's a solution for the too-long term.

"The truth is that there is no easy fix to the challenge of the caravan, which is why Trump was so clever to make the issue his own and Democrats have been so remiss in letting him have it. The secret of Trump's politics is to mix fear and confidence — the threat of disaster and the promise of protection — like salt and sugar, simultaneously stimulating and satisfying an insatiable appetite."

Stephens goes on to attack Trump as a demagogue. But whose fault is it if the Democrats don’t have an effective response?

If Nancy Pelosi's party wins the House, the media verdict will be that the Democrats pursued the right strategy and that Trump's immigration-based appeal failed. If Pelosi and company fall short, the media will give them partial blame, but will largely conclude that (as a Washington Post news story put it yesterday) "running a campaign built on blunt, race-based attacks on immigrants and minorities will have been validated."

But I come back to my original question: If Trump is as terrible as many pundits say, why aren't the Democrats running away with the election?