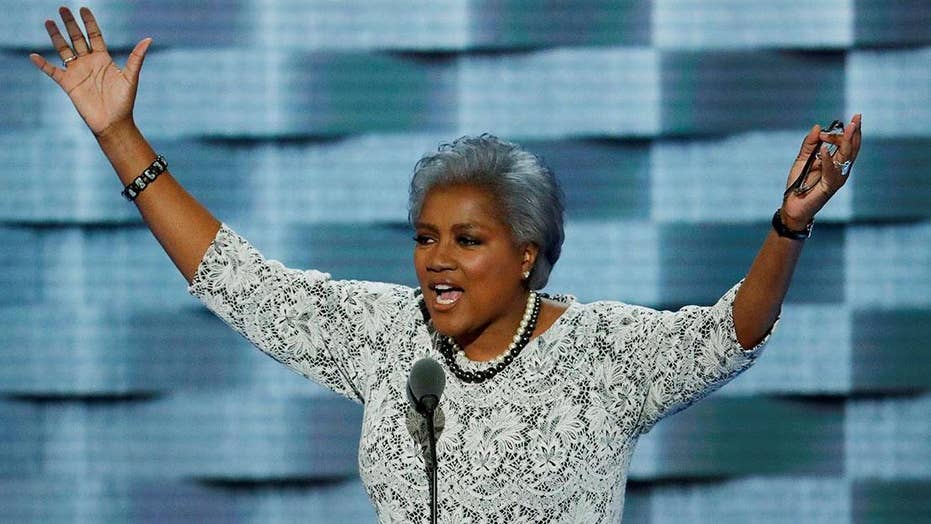 Former interim Democratic National Committee chair's allegations that the DNC rigged the nomination for Clinton has exposed the deep schism in the Democratic party that may not heal as midterm elections approach. #Tucker

Still reeling from Hillary Clinton’s loss to Donald Trump in last year’s presidential election and wondering how to move forward, the schism within the Democratic Party appears to have widened even more in the wake of the bombshell claims made Thursday by a former interim party boss.

The allegations by Donna Brazile not only asserted that the Democratic National Committee helped rig last year’s presidential primary in favor of Clinton over Vermont Sen. Bernie Sanders, but also raised a number of troubling questions as the party attempts to regroup ahead of next year’s midterm elections.

Are Brazile’s revelations the first shots in a virtual civil war between the Democratic establishment faithful to the Clintons and a growing progressive wing represented by lawmakers like Sanders and Massachusetts Sen. Elizabeth Warren? Is this the final nail in the coffin for Clinton's influence within the Democratic Party? Will this scandal linger into 2020 when the party challengesTrump for the White House?

“This is standard in politics when you don’t have the presidency because there is nobody in charge of the party,” Joe Trippi, a Democratic strategist and Fox News contributor, told Fox News. “You’re going to have an all-out battle and a new voice will eventually emerge.”

Finding out who that voice is and when it will emerge appears, for the time being, to be a long way away as the fallout from Brazile’s claims reverberate throughout the Democratic Party.

"It was obviously a shocking revelation," Sanders' campaign manager Jeff Weaver told CNN on Friday. “"It was pretty clear that they were on the Clinton side ... I don't think any of us imagined that there was actually a formal arrangement giving the Clinton campaign control of the DNC.”

In her new book – excerpts of which were published on Politico – Brazile writes that the DNC signed a joint fundraising agreement document with the Hillary Victory Fund and Hillary for America. It had been signed in August 2015, four months after Clinton announced her candidacy and a year before she officially secured the nomination over Sanders.

“The agreement—signed by Amy Dacey, the former CEO of the DNC, and Robby Mook with a copy to Marc Elias—specified that in exchange for raising money and investing in the DNC, Hillary would control the party’s finances, strategy, and all the money raised,” Brazile wrote. “Her campaign had the right of refusal of who would be the party communications director, and it would make final decisions on all the other staff.”

Defenders of Clinton have noted that the Sanders’ campaign also signed its own joint fundraising agreement with the DNC during the campaign season.

Brazile took over as the interim DNC chairman in 2016 when Florida Rep. Debbie Wasserman Schultz was forced out as chairman over emails that indicated the party organization unfairly favored Clinton over Sanders during the primary.

DNC spokeswoman Xochitl Hinojosa, who works under current DNC chairman Tom Perez, told Fox News that the party “must remain neutral in the presidential primary process, and there shouldn’t even be a perception that the DNC is interfering in that process.” But it appears the damage has been done.

Democratic Congresswoman Tulsi Gabbard of Hawaii said Brazile’s revelations confirmed “what many suspected for a long time” and added that the “deep financial debt, closed door decision-making, complete lack of transparency, and unethical practices are now front and center.”

Gabbard’s statement was preceded by a video earlier in this week in which she slammed Perez for a recent overhaul of the party’s executive committee, which she said was intended “to cast out those who haven’t fallen in line with the establishment and who are actually demanding real reform.”

Massachusetts’ Warren, who campaigned for Clinton during the presidential campaign and is rumored to be eyeing a run herself in 2020, said “yes” when asked if the campaign was rigged and called it “a real problem.”

"But what we've got to do as Democrats now, is we've got to hold this party accountable," she said, according to the BBC.

Trump weighed in on social media on the mounting scandal and said the American public “deserves” an inquiry, while lashing out at Clinton in a series of tweets.