Prominent Democrats ranging from senior members of Congress to the party's likely presidential nominee himself now say the coronavirus social distancing restrictions that have upended campaigning may also cancel the Democrats' marquee 2020 event.

“I think both parties are very likely, I hope, to agree on postponing the convention or doing something that won’t bring thousands of people together to kill each other ultimately with COVID-19," Cleaver added.

Biden himself voiced doubt about the convention going forward in an interview Tuesday night on MSNBC. “It’s hard to envision that,” he said. “Again, we should listen to the scientists.”

He went on to suggest there’s time to figure out what to do, leaving the door open: “Who knows by the time we get into … June, July, August, September what it’s going to look like.”

Another senior Democrat expects the convention will be shelved because of the virus.

“I think the thing’s going to be canceled,” the Democrat told Fox News. “And I think a whole lot of people don’t want to go either.” 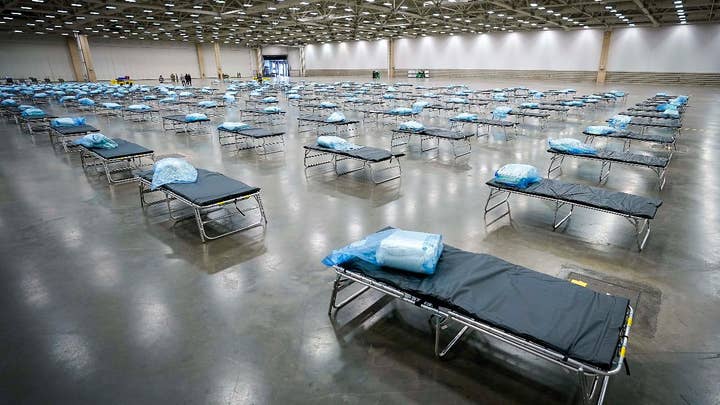 Rep. Debbie Dingell, D-Mich., said public health is the priority and any 2020 large gatherings need to be reconsidered.

“I think the DNC and the RNC both have to evaluate all of their options,” Dingell told Fox News. “But we need to pray that we get through this quickly, but we also need to very carefully consider any large gatherings for the next year.”

The convention is still slated for July 13-16 in Milwaukee and was to galvanize Democrats nationwide and especially electrify voters in the key swing state of Wisconsin that President Trump won in 2016.

The Republican National Convention is scheduled for Aug. 24-27 in Charlotte.

But with Japan already postponing the Summer Olympics scheduled for July 24-Aug. 9, Cleaver says it makes sense for the U.S. political parties to take into account the public health risks of tens of thousands of people gathering together.

"I mean the Olympics taking place in July is already canceled and postponed until next year," Cleaver said. "... I don't think it's outlandish to start thinking about the conventions."

“As we navigate the unprecedented challenge of responding to the coronavirus, we're exploring a range of contingency options to ensure we can deliver a successful convention without unnecessary risk to public health,” Peters said in a statement. “This is a very fluid situation — and the convention is still more than three months away. We are committed to sharing updates with the public in the coming weeks and months as our plans continue to take shape."

It's unclear when extreme social distancing measures will be lifted and whether the virus will be contained by July. Many shutdown orders are running through April, while Virginia issued its most recent stay-at-home order through June 10.

The campaign trail has been completely shut down by the coronavirus. The last debate between Biden and Vermont Sen. Bernie Sanders was March 15 in a studio with no audience and the podiums six feet apart as a stark reminder of the global pandemic.

The next big scheduled primary date is April 7 in the critical state of Wisconsin, despite a widespread shortage of poll workers and public health concerns.

The Badger State is bucking the trend of more than a dozen other states, including Pennsylvania and New York, that have postponed voting out of public safety concerns.

Biden has a powerful delegate lead over Sanders: 1,217 delegates to Sanders’ 914. But he’s struggled to gain traction hunkered down in his Wilmington, Del., basement studio, while Trump holds daily briefings talking about the coronavirus response.

Biden said Tuesday he’s more concerned about the virus than losing the limelight of the campaign trail.

“I’m also learning how to use the media you’ve mastered,” Biden told CNN’s Brooke Baldwin Tuesday.  “I’m sitting in my basement. There’s a television studio set up down here. I’m being told by the people who run this thing for me and staff that millions of people … have heard what I’m saying and what I’m thinking. And that’s just going to have to do. In the meantime, we have to focus on how do we get a handle on this virus.”

Cleaver acknowledged it will be harder for Democrats to cancel the nominating convention. As an incumbent president, Trump already has firm support among the GOP base and faces no threat to winning the nomination. The convention would serve as a huge TV platform to excite the party, but the business of delegates nominating him would be a foregone conclusion.

But Democrats are divided. And conventions are the perfect place for dissenters to stage protests and create headaches for the eventual nominee, just like vocal Ron Paul supporters did for Mitt Romney in 2012 and Sanders supporters did for Hillary Clinton in 2016.

“We’d have to have unparalleled cooperation by everybody to pull it off,” Cleaver said. “We would have a much more difficult time trying to design something that could allow us to go into the fall in a way that doesn’t bring in greater conflict."

Sanders, who still says he has a path to the nomination, would have to be on board, Cleaver said, to ensure Democrats and independents around the country don't think "Bernie Sanders got the short end of the stick."

Sanders' and Biden's campaigns did not immediately respond to a request for comment.

“It would require a monumental amount of selflessness and concern about winning the election in November," Cleaver said.