The Department of Homeland Security is requesting additional support from the Department of Defense at the southern border amid growing fears that the U.S. could see a massive migrant surge in the coming months.

General Glen VanHerck, Commander of the U.S. Northern Command, was asked by Sen. Jim Inhofe, R-Okla., at a Senate Armed Services Committee if he was aware "of any discussion within the administration or DHS that could result in any request for additional troops at the border."

"Sen Inhofe there is a request from [DHS], it is in the planning stages right now of the department to provide additional capability or capacity based on the potential for additional immigration, or folks coming to the southwest border," VanHerck said, adding that he did not have any further details and that he had not yet been tasked to provide any additional support to DHS at this time.

The request is the latest indication of concern from within the administration of a brewing migrant surge at the southern border, on top of the already high levels of migrant traffic already being seen.

The Washington Post reported this week that preliminary Customs and Border Protection (CBP) data indicates that authorities are on track to have encountered more than 200,000 in March, compared to 173,277 in March last year.

Fox News reported last week that DHS officials have put out a call to staff to volunteer at the border as the agency says it "continues to encounter large numbers of individuals at the Southwest Border." 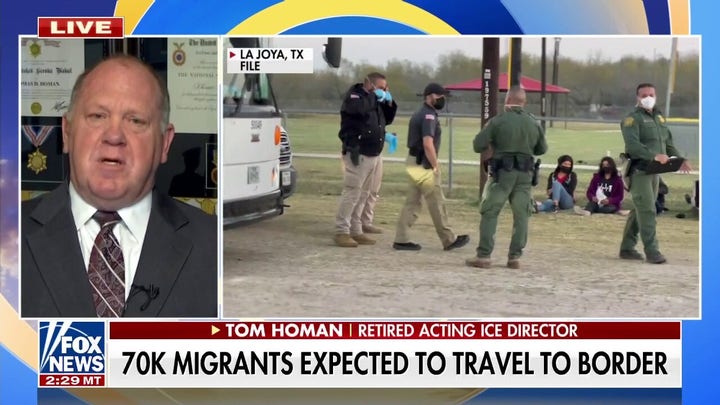 The Post reported that internal emails show concern over a "mass migration event," after Axios recently reported that DHS is preparing a "war room" to deal with the influx. Meanwhile, photographs have emerged showing the release of migrants due to overcrowded facilities in Texas.

These preparations are ongoing just as the Biden administration is mulling ending Title 42 public health protections. In place since March 2020, the Centers for Disease Control order allows for the rapid expulsion of migrants due to the ongoing COVID-19 pandemic.

The Biden administration has kept the order in place with some limitations, to the ire of immigration advocates, and used it to expel more than half the migrants encountered at the border in February. It is due to be renewed at the end of the month, and the Biden administration has not yet committed to either extending it or letting it expire -- just as top Democrats are demanding it be ended.

Should the use of Title 42 end, not only will it see more migrants released into the interior, it raises fears that the loosening of border restrictions will encourage even more border traffic.

"I am deeply concerned that the crisis will soon get even worse…if the Biden administration ends the Title 42 border policy in April. Illegal immigration will surge even beyond the current record setting levels," Inhofe said on Thursday.