McAleenan: ICE needs to be out in communities, exercising their authority

The acting head of the Department of Homeland Security on Thursday night denied leaking information that eventually led to the cancellation of ICE raids in 10 cities across America.

"I would not, have not, ever leaked details of a sensitive law enforcement operation," acting Secretary Kevin McAleenan said during an appearance on Fox News' "The Ingraham Angle."

"My primary responsibility," he added, "is the safety of the men and women who go out there every day to protect the American people. And so it's just not true."

"My primary responsibility is the safety of the men and women who go out there every day to protect the American people. And so it's just not true."

McAleenan was accused last week of leaking plans for raids scheduled by U.S. Immigration and Customs Enforcement (ICE), a unit of the DHS, after supposedly expressing fierce opposition to the plan and allegedly ordering top officials to “stand down” on the operation.

The source also said Homeland Security officials had been planning the raids since April and that McAleenan had been opposed to the plans from the start.

McAleenan also denied that anyone in his office leaked the information after host Laura Ingraham pressed further, saying that as the operation date nears "you have to push information out into the field."

"So tonight you're saying these rumors are wrong false and you did not do that?" Ingraham asked.

The acting secretary also commented on the Democratic presidential candidates advocating for decriminalizing illegal border crossings, saying it would "further undermine our efforts at the border" and increase the numbers of those crossing the U.S.-Mexico border. 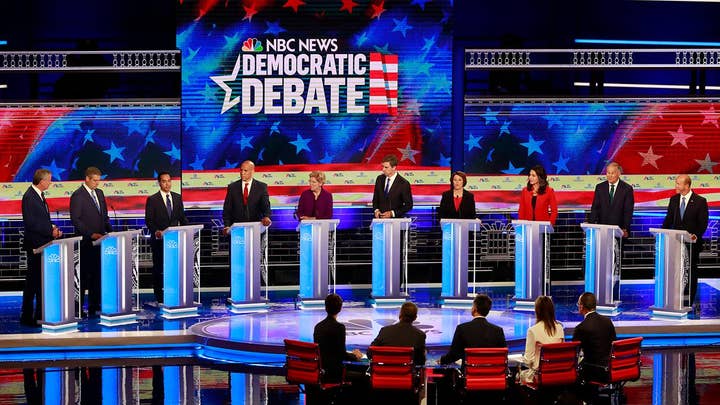 "Decriminalizing crossing between ports of entry when we know it's associated with criminal smugglers ... when they know they bring drugs behind those people that are crossing, it would just add to the problem," McAleenan said.

"Decriminalizing crossing between ports of entry ... it would just add to the problem."

McAleenan was also asked about the candidates' platform of free health care for illegal immigrants.

"We've got a lot of issues to solve domestically [with] the homeless population and medical care as it is," McAleenan said.