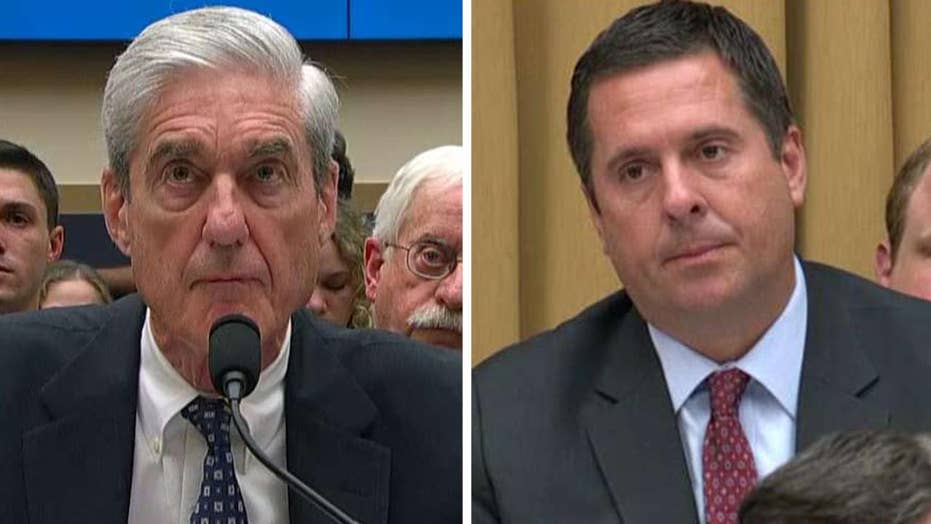 House Intelligence Committee ranking member Devin Nunes, R-Calif., prefaced Special Counsel Robert Mueller's testimony on Wednesday by ripping into Democratic speculation surrounding the Russia investigation, calling it a "conspiracy" and comparing it to theories about the existence of the Loch Ness Monster.

"Welcome everyone, to the last gasp of the Russian collusion conspiracy theory," Nunes began before blasting mainstream media outlets for their reporting on the controversial and unverified anti-Trump dossier compiled by former U.K. spy Christopher Steele on behalf of research firm Fusion GPS.

Nunes further attacked the dossier's allegations as "absurdities" that Fusion GPS "fed to naive or partisan reporters and to top officials in numerous government agencies." He also took aim at former FBI Director James Comey for briefing former President Obama and President Trump about the dossier despite acknowledging that the claims were unverified and salacious.

Some have speculated that Comey briefed the president as a way to make the dossier relevant enough to garner media coverage.

"The Democrats have argued for three years that evidence of collusion is hidden just around the corner," Nunes said. "Like the Loch Ness monster, they insist it's there even if no one can find it."

Democrats have claimed that Mueller's report showed evidence of collusion and troubling contacts between members of Trump's campaign and Russian officials. Mueller's report, released to the public in April, detailed Russian efforts to influence the election but was unable to conclude that the Trump campaign engaged in a "conspiracy" with the Kremlin to swing the 2016 presidential election.

Intelligence Committee Chairman Adam Schiff, D-Calif., said during the hearing that the Mueller report showed a series of "lies" by Trump as well as "a scheme to cover up, obstruct and deceive every bit as systematic and pervasive as the Russian disinformation campaign itself, but far more pernicious, since this rot came from within."