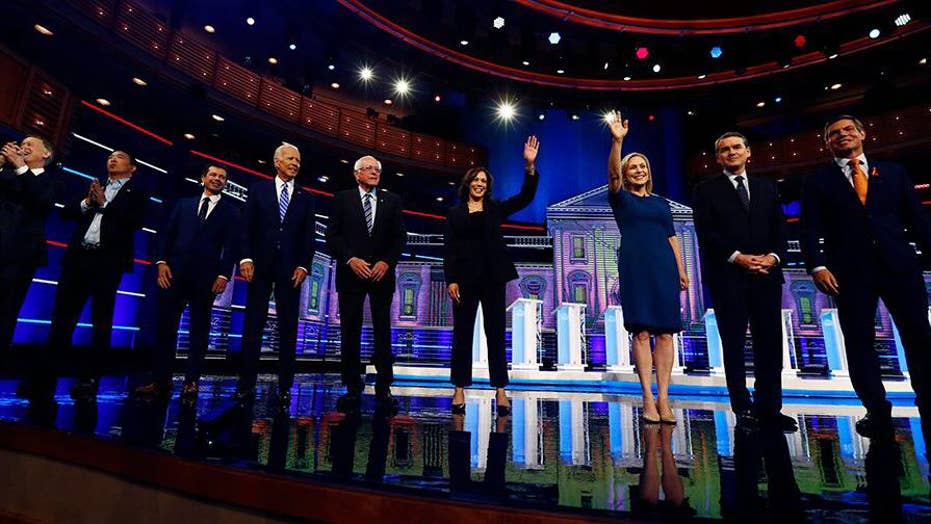 How 'polite' will 2020 Democrats be at the second round of primary debates?

Former economic adviser to President Obama Robert Wolf previews what's at stake for frontrunner Joe Biden and the rest of the field.

DETROIT -- The presidential primaries and caucuses don't start for another six months, but for many of the lower-tier candidates in the record-setting field of two-dozen Democratic contenders, the clock's already ticking.

With the Democratic National Committee raising the thresholds for the third and fourth rounds of debates in September and October, Tuesday and Wednesday’s second round of primary debates in Detroit may be the last best chance to make a splash in front of a prime-time national audience.

BIDEN, SANDERS, SLAM HARRIS OVER HER MEDICARE-FOR-ALL PLAN ON EVE OF DEBATES

And that means some of them are sharpening their knives and getting ready to go on the attack against some of their 2020 Democratic White House rivals.

“If we run on some of these things, we’re going to lose to Donald Trump,” former Rep. John Delaney of Maryland told Fox News hours before Tuesday night’s debate.

The centrist candidate and longshot for the Democratic nomination appears to be getting ready to fire away at the government-run "Medicare-for-all" plans pushed by top-tier progressive candidates Sens. Bernie Sanders of Vermont and Elizabeth Warren of Massachusetts.

But getting too aggressive could come at a price. Debate organizers – hoping to avoid the food fight witnessed during the first round – are vowing to cut precious time for those interrupt too often.

Delaney, who’s trying to reach the thresholds to qualify for the next two rounds of debates, acknowledged that “it’s important to be on the debate stage. I’m not going to diminish that.”

While he emphasized that “I don’t think any of these [debates] are do-or-die moments,” he admitted that not getting on third and fourth rounds of debates “makes it more challenging” to continue his campaign.

Rep. Tim Ryan of Ohio also downplayed the notion that the debate's this week are "do or die." But he acknowledged that "this is definitely a great opportunity. There’s going to be millions of Americans watching that don’t know me."

"I don’t think you can square taking private insurance away. That’s a big problem,” he said. "It’s a bad policy because a lot of union members have already negotiated these contracts and gave up wages in order to get the good health care and then the Democrats are going to be coming in and saying ‘hey we’re going to take that health care plan.’ That’s a bad idea and it’s really bad politics too.”

Former Colorado Gov. John Hickenlooper – another contender struggling to qualify for the upcoming debates – also understands the significance of the Detroit showdowns.

“Certainly the debates have a lot of attention. And I recognize that this is an important time,” he told Fox News recently.

Hickenlooper’s hoping that “if I can get that message out [at the Detroit debate], people in Iowa and here in New Hampshire will say ‘huh.’”

Mo Elleithee, the founding executive director of Georgetown University's Institute of Politics and Public Service and a Fox News contributor, spotlighted the gravity of the situation for many lower-tier contenders.

“For a number of people this debate is going to matter significantly,” he said.

Former Housing and Urban Development Secretary Julian Castro’s living proof of how influential these showdowns can be.

A well-received debate performance in the first round – in which the former San Antonio mayor pummeled fellow Texan Beto O’Rourke – gave Castro a campaign cash boost. He’s already met the fundraising criteria for the upcoming rounds and sees the Detroit showdowns as another chance to shine.

“After the first debate we had some good momentum in terms of getting more support, getting more fundraising, being on more people’s radar screens and I’m confident that with this next debate I’m going to get even stronger,” he told Fox News.

Admitting that “my name ID is still not as high as it is for some of the other candidates,” Castro sees the showdown as another opportunity to “continue introducing myself to the American people.”

And that’s why this week’s debates are so crucial.

Elleithee emphasized that it’s all about survival.

“If they just do well enough,” he noted, “they can make it onto the September debate stage.”